Thanks for all the words of wisdom today…I know I would regret it if I didn’t go…and I don’t want to sit like a bump on a log. Contrary to some belief, I do like to have SOME fun—but sometimes it can turn into this?! Why does this picture forever come back to haunt me? This was post-Ryan’s cousin’s wedding the summer before last. What was I doing??!!! We will never know for sure.

ANYWAYS! The best news ever———THE DOCTOR CLEARED ME TO RUN!!!!!!!! He was completely awesome and was a marathon runner himself so he totally understood everything I was going through. The x-rays came back perfectly and he told me while I do have shin splints, I CAN run on them as long as after my runs my legs don’t show any signs of bruises or swelling. He said the problem should correct itself as my feet get used to my new orthotics in my Brooks running shoes (which he said are absolutely amazing and I should go buy another two paris). He did say though that for the next four weeks, I can wear nothing but shoes with orthotics in them. NO bare feet, NO slippers, NO flip flops. Only shoes with orthotics. So, I had to get more orthotics to put in my crocs that I wear to school and I guess I’ll be wearing my running shoes everywhere (and hopefully getting another pair sometime soon). To back up some though, this morning I went out to lunch with my roommate who was in town for the day (she still lives in a different city, sadly). We went to Press 101, a really nice wine bar/bistro in the Sandlake area. They have homemade soups and gourmet sandwiches as well as an extensive wine list and nighttime entertainment. Well, we didn’t go for wine today but the sandwiches were out of this world!! I had the Mango Chicken Sandwich on ciabatta bread: The hot, crusty sandwich had marinated chicken breast, pepperjack cheese, peppers, cilantro and mango chutney on it. It was absolutely divine in every way and I was famished. I ate the entire thing minus half the bread. As good as the bread was, it about the size of my head and definitely not whole grain. Very tasty though and it reminded me of something I would have gotten in Europe!

This morning I did go to the gym but it was sort of a bust and I left after 20 minutes. I just wasn’t feelin’ it today. I did some upper body though:

3 sets of biceps curls on cable machine. 10 lbs each

……and then I left. Like I said, it just wasn’t in the cards today. I did snack on some chobani and strawberries though mid-morning! And after the doctor today I stopped at Whole Foods with the intention to get a smoothie with the remaining five dollars on my gift card, but this new whole foods does not have a smoothie bar! It’s one fault!!!!! So, I got some yogurts and tried this z-bar for a snack: It was okay but didn’t taste as “grahamy” as I would have liked.

And for dinner tonight, I made ol’ reliable: rice and lentils. I added a ton of cayenne pepper and 1/4th cup reduced fat mexican cheese. It was melty and delicious! I also had some spinach and a big a$$ carrot. And silly me!!! I forgot to take a picture of the snack I am bringing with me for tonight…..I honestly don’t know what it is yet though!!! I will see what I have on stock and report back (with my final sugar sculpture!) in the morning.

Have a great night! 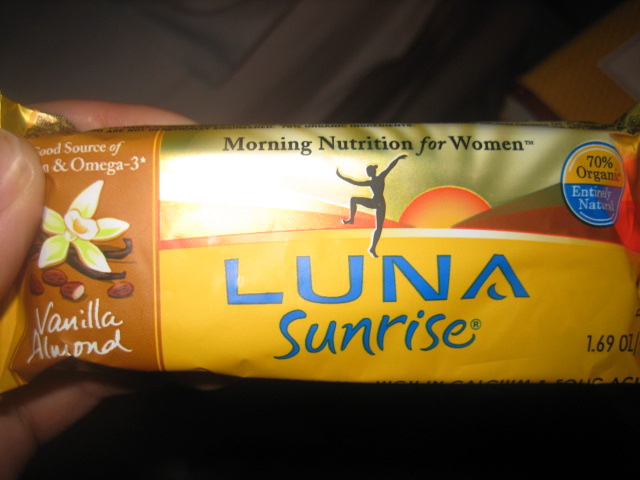 Food of the Stars