How was your Monday? I loved reading what y’all were thankful for. I’ll tell you what else I’m thankful for: a strong body. I don’t know why I feel the need to mention this right now but guess what?!?

For the first time in my whole life I actually have real curves and you know…it’s not so bad. I might even like it. Heather really nailed it this morning when she talked about the inability to size up to our society’s unrealistic beauty standards. So, so true. As a culture in whole, we have suuuuuuuuch a disordered, unhealthy perception of what beauty really is. I’m not going to lie—at first I might have been a little freaked out about gaining 10 pounds but…it’s grown on me (no pun intended muhahaha). I’ve had several trusted friends of the opposite sex tell me that I look much better now than I did, say, five months ago and I feel like I sort of “fill out my clothes better”, so to speak. I think it might be because my butt has grown bigger but who knows. 😉 You’ve gotta laugh at these things…and seriously, I’ve been laughing hard. All five of us have gained weight since moving here and it’s actually quite humorous when you really think about it. I think these 10 lbs I’ve gained have hailed from the tastiest and best calories I’ve ever consumed. Rock on.

What was I saying?

Oh yeah, I’m thankful for a strong body because it got me through a crazy intense spin class this morning! For some reason spinning is just so much harder on Monday morning, no?

After my workout, I chugged some grass in the car on the way to work. Keepin’ it classy. Lunch was standard and rather boring. A hummus and turkey sandwich on whole wheat + 2 kiwis: But my snack was out of this world!! This was my first time trying this Honest Foods bar and it was to die for. Seriously…so freakin’ delicious. And filling, too! I ate this at 2:30 and was set for the next few hours, hands down. I loved the chew!

You know what else was to die for? That would be my dinner, which was pancakes and a fried egg. I love breakfast for dinner (can I get a BFD?!) and have a very loving relationship with Kodiak Cakes pancake mix. I still can’t believe I pay $8.00 for pancake mix but this is one of those things that is just worth it. I promise. So tonight I just used my standard half cup of mix/half cup of water and made two fluffy pancakes, topped with TJ’s yogurt, almond butter and maple syrup (duh). It was fabulous.

Because we are besties and all, I was telling Kevin tonight about frozen banana soft serve and how genius it is. He was very much intrigued about the idea of pureeing whole frozen bananas in the vita-mix and having it turn out like perfect froyo from the heavens (as in, he is making it tomorrow). Talking about it made me want it, so naturally I whipped up some and topped it with dark chocolate chips—- The problem was that I was SO excited about this and I took a picture on my blackberry to send Kevin to prove to him how awesome it is that I forgot until it was almost gone to take a photo for the blog. It looked really pretty before I devoured it. Sorry.

About to jump in a really hot bubble bath and read myself to sleep. Mmmmm How Many Crumbs Equals One Brownie?! 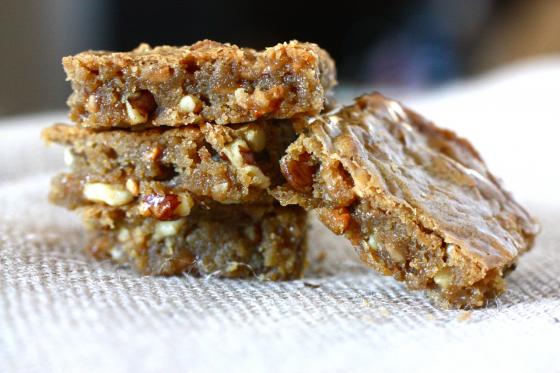