I.am.so.stuffed. Enough said. Tonight I went out for tapas with my friend Erin and her husband. We went to Cafe Tu Tu Tango, which was conveniently only like 5 miles from my apartment. The food was good. The sangria was awesome..I always end up eating way too much at places like this, especially when you order pitchers of sangria. 😉

Let’s backtrack though—after I did my AMAZING 90 minute cardio yoga class via ipod, I did have a snack to keep me until dinner because by the time we got the restaurant and had food in front of us, it had to be 8:45-9:00. I had about a tbsp of almond butter with a little jam and a few pretzels. After I got ready to go and while I was waiting for Erin, I also snacked on a couple almonds and pickles. These always seem to do the trick when you just need “something”. When we got to the restaurant we immediately ordered a pitcher (it was a small pitcher) of sangria to share. I really can’t be sure just how much I drank tonight because it was sort of one of those things that when your glass got a little low, someone just poured in some more. I would say I probably had about a glass and a half or two glasses in all if I had to guess… We also ordered three tapas to come out immediately: humms, spicy shrimp and a Spanish antipasto plate with kalamata olive spread, hot pitas, manchego cheese, salami and proscuitto. These plates are smaller than they seem, I swear! I had two shrimp, a couple pieces/pita wedges and hummus and 1 larger pita wedge with manchego cheese and olive tapenade. Then…while on our second glass of sangria we decided to order more! We ordered a goat cheese and sundried tomato pizza (the pizza was about 6 inches and thin crust-SO good), shrimp spring rolls and crab and artichoke dip. I had two slices of the pizza (each slice was about three or four inches long), 1/2 of a spring roll and 1 cracker with dip. Then………the desserts looked so interesting we just had to try one!!! We got some sort of oatmeal cookie ice cream sandwich but I could only have a few bites—I was uber stuffed at this point. Off to go put on elastic waist pajama pants and hit the sack. 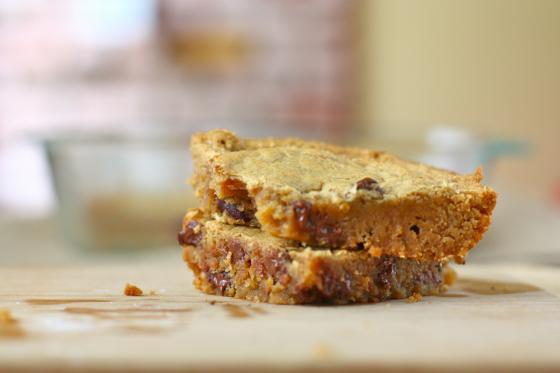