Thanks to everyone for the kind comments about my “glory walk”! I got this flower pinned to me as well as the traditional Le Cordon Bleu pin from Paris, so that’s pretty cool. It was definitely very cool to shake  hands with all my Chef instructors knowing how hard I worked this past year. Hopefully it will all pay off!! 😉

This morning I snacked on this: It was pretty meh. Ryan bought me a couple last month and I had one in Orlando that needed to be eaten. I don’t think it helped that it sort of melted in my pocket and was very messy to eat. It didn’t really have that proteiny taste and it did keep me going for another 2 1/2 hours, so that’s good I guess. I just think there are better bars out there. The best thing about it was that it had this top layer of something like caramel that was very tasty!

And then we had some beeeeer!

We were all surprised because we actually had a guest speaker! I’m not sure how many of y’all are familiar with Shipyard Brewery, but the partner/distributer for Florida came in and spoke to us today. It was very interesting to hear how he came into his job (his grandfather brewed beer during the Prohibition!) and he poured us six tastes. We tasted:

……….and the verdict was?! I really really liked the Pumkinhead Ale AND the Shipyard Export Ale! I thought I might like the Pumpkinhead but surprised myself with the Shipyard Export Ale. It was really mild and clean tasting…not bitter like other beers I have tried. I will definitely look for this next time there is a calling for beer. It tasted so completely different than the Bud Light and (sorry to say it) the Naty Light of my past. MUCH better!

Another treat was that we got to try some root beer!!! Oh my gosh, it was amazing. The best root beer I’ve ever had, hands down. It would be killer with vanilla ice cream. His root beer contains NO high fructose corn syrup and instead sweetened with brown sugar. No artificial ingredients at all. We each got to take home a bottle and I’m giving mine to the boy on Friday because he loves root beer too!

I also got a sweet bottle opener key chain. It was a fun day.

And then on to lunch! I had the last small bowl of my Chunky Lentil Soup this afternoon along with a morningstar farms black bean burger patty with ketchup and texas pete. And a huge apple. It was sooo good.  Especially the black bean burger. I’m addicted to these!

Alright—I’m off to do some work, pack, study for my cost control final exam tomorrow and later, go on a run! See you for dinner! 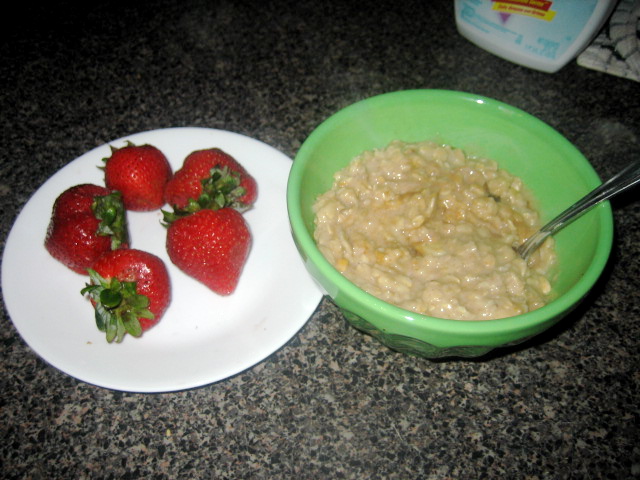