I really lucked out with dinner tonight (working at a fine dining restaurant has its perks!). Today at work one of the sous chefs was cooking lunch for everyone and since I had already eaten my packed lunch and snack, I didn’t eat it but I asked if I could take it home in a to-go box to have for my early dinner! He made blackened mahi with spanish rice and beans and avocado sauce…..and he was nice enough to inform me that he didn’t think I would want to eat the beans because he used bacon in them. Totally glad he told me because I would have dove right in! So, instead of the beans, I made some baby bok choy at home (blanched it in boiling water for 30 seconds) and had that instead. Delicious and something I would have paid a lot of money for in a restaurant. I also had a spinach salad with woodstock dressing but was in such a rush that I totally forgot to snap a picture! I just dumped the rest of the bag of spinach on my plate, drizzled dressing over, and dug in! e I was going to make beans with spinach and couscous since I soaked some white kidney beans overnight and cooked them this morning, but I guess that will just have to wait. When someone offers me free food  I just have to take it! 😉

I’m already at school since I had to take care of some scheduling issues before class. Good thing I found the tiny bubble of wireless internet connection (seriously its about a five by five box near the cafe where I found the only wireless in the whole school). I’m finishing off my chai bavarian tonight and just praying it doesn’t collapse when I unmold it. I brought some soy milk from home so I can make a latte later with leftover chai that I stashed in the fridge with my name on it last night. I also brought a peanut butter z-bar. Hopefully it will be a rather early night but its the deep cleaning that I’m dreading! 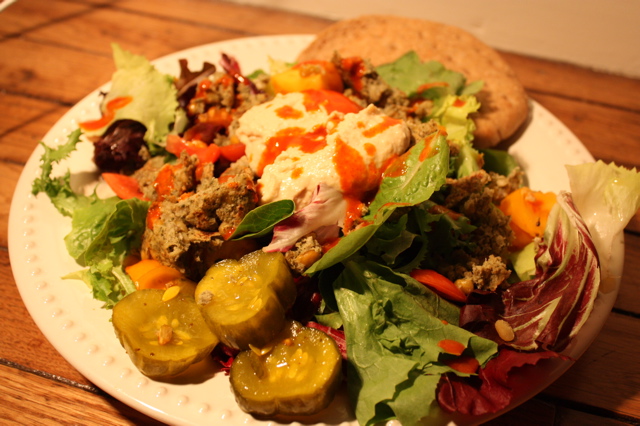 Can’t Be All That Bad