I got in late last night from school and that, coupled with walking a puppy around midnight, determined that I was not going to get my necessary sleep last night! I realized though that I have worked out now for 5 days in a row and it’s time for a rest anyways, so this morning I rested! My arms are suuuuuper sore anyways from my workout yesterday. Seriously, they are sorer than they’ve been in a very long time. Yay!

Last night in school we made souffles! We made one sweet and one savory and Jack and I chose to do a lychee souffle and a calzone inspired souffle with cheese, sundried tomatoes, garlic and mushroom in it. Both puffed up all pretty in the oven and I had a small taste of each. I’m not big on the texture though. Very soft and sort of mushy. The flavor was good though!  My bar was wonderful last night. I really really enjoyed the Kashi Roll bar and it definitely filled me up and kept me going with ample energy until midnight. I liked how chewy it was and the taste was very good for a protein/energy bar. I will be buying more of these in the future! This morning, I had some extra time with no workout, so I made some oatmeal for breakfast. I used 1/2 cup oats, 1/2 cup soy milk, 1/2 cup water, a spoonful of almond butter, 2 chopped dates (!) and a small chopped banana. It turned into the perfect fluffy bowl! I also had a mug of hot english breakfast tea but I think I will need something a little stronger later on when I get to work….I’m still quite tired! I’m doing something different for lunch today—something I’ve wanted to do for months actually ever since I bought my tiny basil plant from the farmer’s market and gave it life on my balcony. 🙂 The other day at the store I bought one of my favorites, REAL mozzarella cheese! So, today, I combined one of the mozzarella balls (chopped) with a handful of my basil and about a cup of chopped grape tomatoes for the ultimate summer salad. I made a simple vinegrette dressing with 1 tbsp extra virgin olive oil, a squeeze of dijon and a splash of balsamic. I didn’t use all the dressing on the salad, there was a tiny amount left over. I basically coated my salad with the dressing then poured off all the extra. I also packed a hard boiled egg white (for more protein power), a sliced kiwi, some kashi crackers (1 serving) and, for a snack later, a yogurt and cherries. It looks like another summer storm is headed my way! Hopefully I’ll stay dry until I get into work…

Question of the Day: What is your favorite post-workout breakfast combo? OTHER than oatmeal! 😉 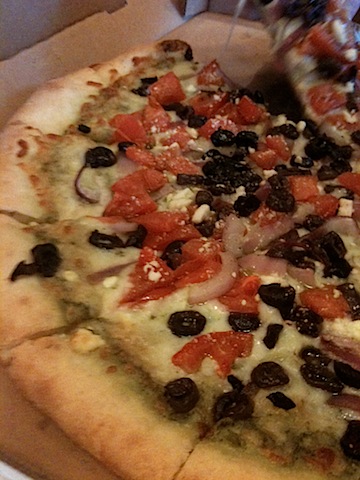