Sorry for being gone for so long but the past 24 hours has been SO busy and I haven’t gotten a chance to even crack open my laptop. I had SUCH a wonderful time though with my girlfriends at Deeper Still. Beth Moore was absolutely fantastic and so were Priscilla and Kay. It was awesome because each of the three of us felt like we got something very particular and special out of a certain talk that seemed just destined for our ears this weekend. I’m so thankful for my friends and for getting to attend such a positive event! Of course we ate some awesome food as well! 🙂

There was a plethora of coffee: Yesterday’s dinner was at Dandelion.…one of my very favorite Orlando veggie places that I used to frequent when I lived there. Naturally though, I got lost and Caitlin had to talk me through downtown Orlando! When we finally got there, I had a bowl of the veggie chili and one of these summer rolls— The summer rolls are stuffed with all sorts of shredded veggies and served with some sort of almond butter ginger dipping sauce. Delicious!

Another awesome perk of the little trip was that, unknowingly, we scored a suite at The Sheraton! Sarah apparently had points or something and since all three of us girls were crashing in one room, it was so nice to have a little more space. I actually slept better last night than I’ve slept in a really long time. Maybe I just needed to get out of town??!

This morning we woke up and immediately headed to Panera to grab some breakfast that was cheaper than the hotel’s before the conference started again. I got my old school college favorite—a toasted whole grain bagel with low fat cream cheese. And hazelnut coffee. So good. There were 10,600 women attending the conference. It was INSANE! And a major estrogen fest. I’m in need of a sports bar or college football or something….haha (Anne and I have this humorous ongoing joke about “finding Journey” since when at a bar in Tampa last month the band claimed they didn’t know “Don’t Stop Believing” and we were crushed beyond belief. What band doesn’t know Journey??!) Oh y’all know how much I would love to go back and see AC DC and Journey in concert on Wednesday night. That would be incredible. And crazy. Anne, road trip?! hahaha

To save some $$, us girls packed our lunches and sat outside at the lake during a break to eat. I had a peanut butter and jelly sandwich on whole wheat and another fruit strip! And a few hours later I totally ripped into my bar while Beth was teaching on stage. We decided to scoot out before the panel Q&A because, well, Orlando traffic is totally insane and especially when there are almost 11,000 women trying to get out of a parking garage at once. No thanks. We were SO happy we left a little early and were able to get home quickly.

My mom had dinner waiting for me! Salad with goddess dressing and homemade tomato basil proscuitto lasagna from a reallyyyy old school Cooking Light issue! I actually went back for seconds because the lasagna was THAT good! Also, I had a small glass of Cabernet. It was lovely.

See you in the morning! 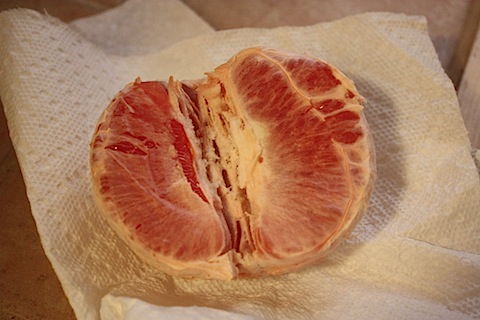