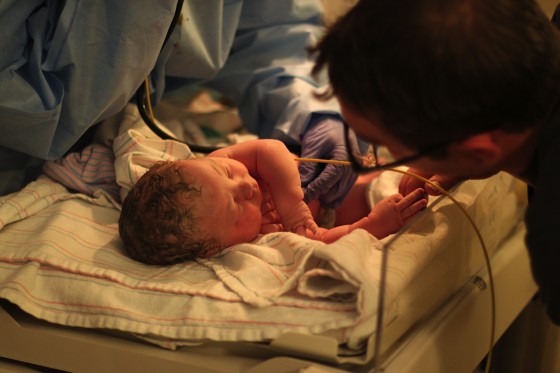 I can’t believe I’m actually writing this…that our son is actually here and currently napping on me as I type. My life is completely different than it was a week ago, when I stood in the shower and cried because I wanted him to come so badly. I’m really proud of Grayson’s birth story. It went completely different than the way I had it all planned out in my head, but isn’t that life? I’m naturally a type A person and went into labor with a detailed birth plan and a set of expectations. I feel like labor taught me a valuable lesson in being flexible and letting go of some things I was holding onto too tight. 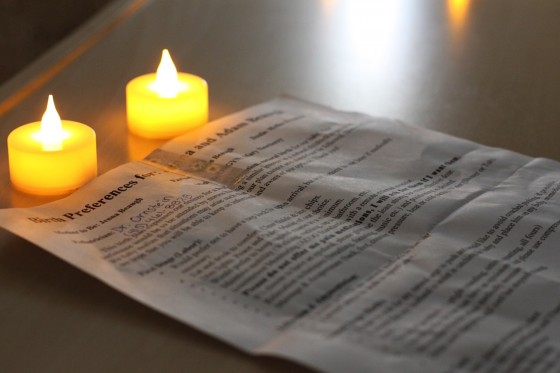 My water broke around 7:15 am on my due date, May 14th. Adam’s alarm had just gone off and we were laying in bed chatting about how it was Grayson’s due date and wondering when he would come. I had felt completely fine the night before and woke up feeling great and not the slightest bit abnormal so I figured my chances of delivering on my due date were on par with average at about four percent. Right then, however, I felt a really strong kick or punch followed by a  bad stomach cramp..completely out of the blue.”Well, that was different!” I said to Adam. I got up to use the restroom and as soon as I stood up, liquid started leaking down my leg. There wasn’t a big gush like in the movies but I knew instantly my water had broken. I wrapped myself in a bath towel and hollered out to Adam that I thought my water had just broken. “Looks like Grayson has decided to be punctual after all!” I shouted from inside the bathroom. 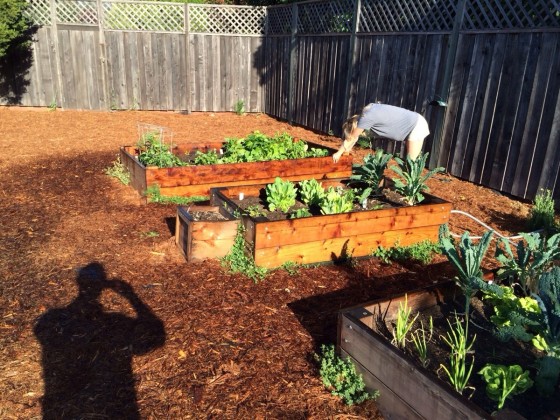 My contractions started just minutes after my water broke and at that point I knew this was the real thing. I went into the kitchen where I found my mom drinking a cup of coffee {she had just arrived a few days before} and said, “My water just broke! I think I should eat a bagel.” Famous last words, indeed. I only managed to eat half the bagel before the contractions became too strong. I texted Mollee, my doula, and my midwife, took a quick shower while Adam and my mom packed the car, and together we headed to the hospital. I had been hoping to labor at home as long as possible but since I’m GBS positive and my water had broken, knew we had to get to the hospital soon. 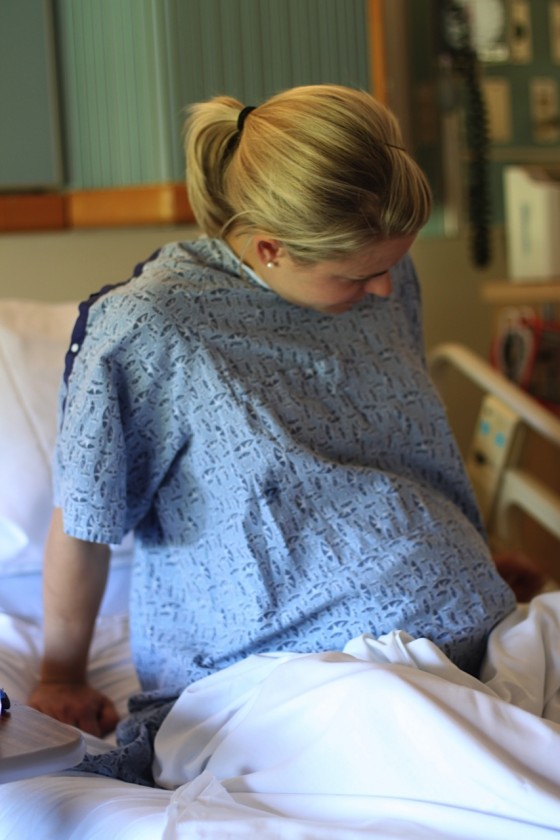 We checked in and headed to triage to wait for my first dose of antibiotics. My contractions weren’t regular yet but they were already so painful that I was down on the floor on the triage room on all fours because I couldn’t lay still on the bed. I couldn’t believe how quickly everything was happening and how painful even this stage of early labor was.  My midwife walked in and got down on the floor with me while I took another contraction and told me she wasn’t planning on checking my cervix just yet since my water had already broken and she wanted to minimize anything invasive. Soon after, my doula arrived and we changed rooms from triage to a labor & delivery suite. Her and Adam took turns going down to the restaurant downstairs  and eating lunch while I practiced my deep breathing {waaaaay easier said than done} and felt the rest of my water break all over my flip-flops.

At around 3pm, Mollee talked me into going into the shower. She and Adam took turns basically hosing me down with the shower head while I sat on the bench and tried to breathe. The hot water felt wonderful but it was about at this point when I began asking, or begging, rather, for an epidural. I know everyone says this, but the pain literally was like nothing I have ever felt before. To be exact, it felt like a meat grinder was working its way through my belly. Despite my hypnobirthing prep and my true desire for a natural birth, I could feel myself starting to panic from the intense pain. I mean, of course I knew labor would hurt but I just felt completely unprepared for just how MUCH it would hurt. My contractions were coming fast and strong without much break in between. Per my birth plan, my team was supposed to ignore me if I asked for an epidural and nurses were instructed not to offer me any pain medication. 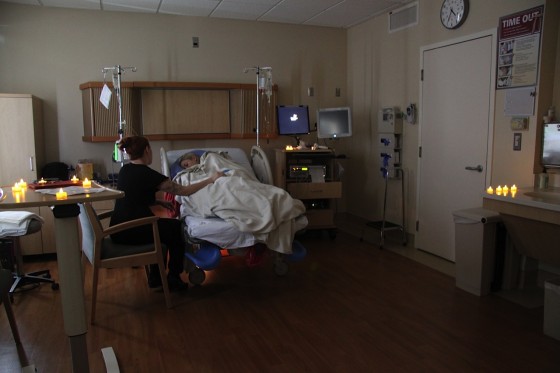 I sat in that shower and begged Adam and Mollee for an epidural. I think I asked about twenty times. By this time, it had been almost ten hours and I needed relief. I know my limits and I knew I was past them. It was, hands down, the right decision. So, my midwife called for one and I called the anesthesiologist my hero and told him I loved him. The relief was almost immediate and I was able to relax in bed for a few hours, which felt amazing after my previous ten hours. I wasn’t sure what to expect with an epidural, but realized soon that even though you don’t feel the crazy searing pain of contractions, you still feel super intense pressure during them. Mollee held my hand and told me her birth stories and Adam massaged my back for what seemed to be hours. 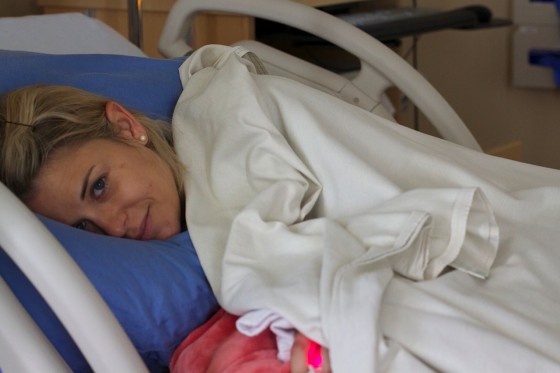 My biggest worry with getting an epidural was that it would stall out my labor, which had been progressing incredibly quickly until then. However, that wasn’t the case at all with me. When I got checked around 6pm, I was already at 9cm and had started to bear down with each contraction. The hour and a half before pushing was the most intense part of labor for me. The epidural had seemingly quit working at this point {I could totally feel my legs} and each contraction brought more pressure than I’ve ever known in my life. The only thing that helped was tricking myself into each contraction lasting eight deep breathes. I would count in my mind with every breathe/moan for a count of eight then find a brief moment of sweet relief until the next one.

For some reason, I was really scared to start pushing. Looking back, I shouldn’t have been scared because pushing actually felt good compared to what I had been feeling. I got checked again close to 7pm and at that point was 10cm and it was go time.

I pushed and pushed and pushed for two hours, making little progress. Every time I pushed, he would inch down a millimeter then inch right back up. I didn’t feel like I was making any progress at all and was put on oxygen. The nurses and midwives kept alternating me from side to side because Grayson’s heart rate kept plunging then going back up. I was incredibly scared. At about 9pm, the OB on duty came into my room and told me that unless I could get him out in the next few minutes, I would have to have an emergency c-section…his heart rate was getting too low and he needed to come out NOW. Now, there’s absolutely nothing wrong with c-sections, but one of my goals was to try to have a vaginal birth if possible. I really didn’t want surgery after laboring for the past 14 hours. So, I kept pushing…and pushing. My doula and midwife asked the OB if there was any other way – that’s when she suggested the vacuum. At this point, I was beyond scared but there didn’t seem to be any other way. It was a vacuum extraction or an emergency c-section…so, we went with the vacuum. She told me I had three pushes with the vacuum to get him out and I just gave it all I had left in me. I’m pretty sure I shook the hospital walls with that scream {his head was almost 15 inches, y’all…}. I screamed, pushed, tore and finally Grayson made his way into this world and was thrust on my chest. No one expected such a big baby – no wonder I had issues pushing him out! 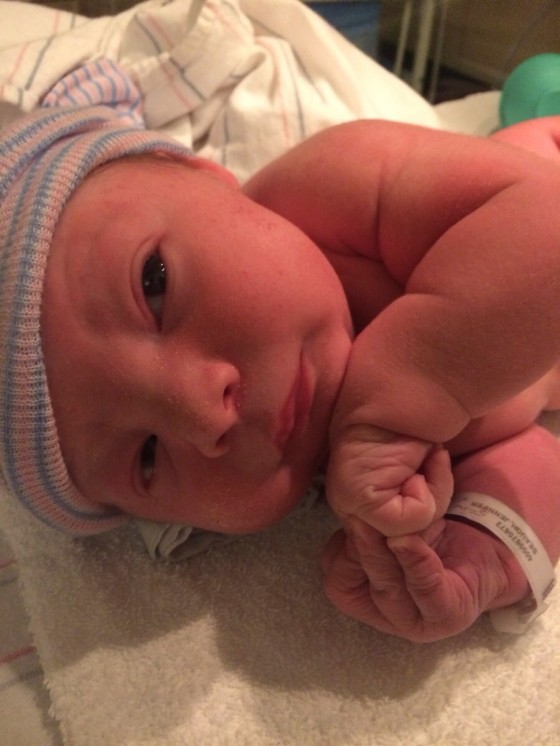 Adam didn’t get to catch our baby, like we had been hoping for but he did get to cut the cord after it stopped pulsating. Unfortunately, I also didn’t get the amount of immediate skin to skin contact that I had wanted because Grayson was having some trouble breathing and had to be taking to the warmer with Adam by his side as I got stitched up. I’m tearing up as I type this because it was actually quite traumatic for me. I kept calling out across the room to see if he was okay, feeling like he must be so scared, but happy that Adam was there with him. After the pediatrician checked him and his heart rate and breathing were back to normal, I got to hold my baby and never wanted to let go. We feel so blessed that he’s incredibly healthy, especially after that little scare. 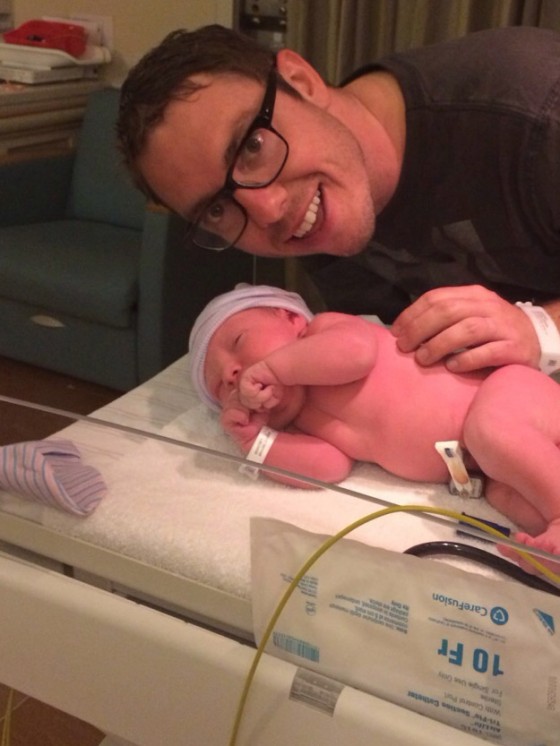 We spent three nights in the hospital and I’m not going to lie — they were really hard. I was {still am} incredibly sore and we had some issues with feeding him that were soon resolved but really hard to go through. Needless to say, we all were incredibly happy and relieved to go home last Saturday and start life as a family of three! Grayson has been eating like a total champ and has almost, after a week, gotten back up to his birth weight. I’ll write a separate post on breastfeeding and the first week postpartum, but let’s just say I did not expect breastfeeding to hurt so much in the beginning. It hurt. A lot. Thankfully, by day six it stopped hurting completely and I’m hoping to only enjoy it more in the upcoming days. I feel very lucky that I don’t have any issues with milk production so far and Grayson has been a wonderful eater. 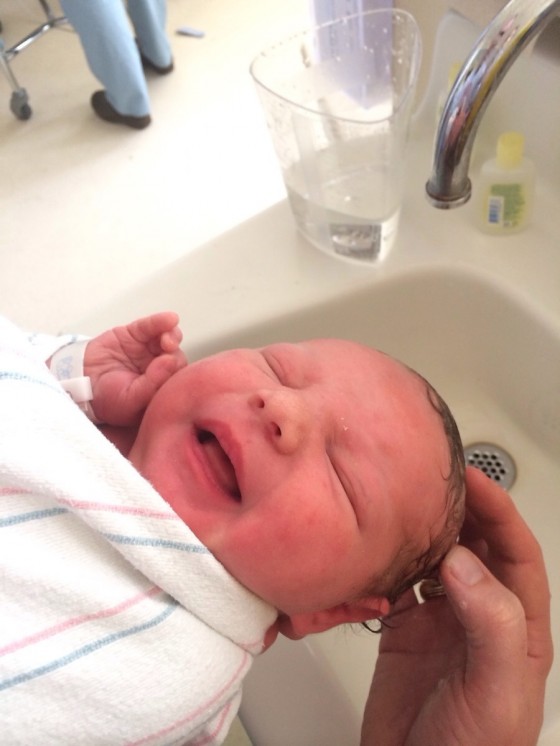 So, did I get the birth I had hoped for?

Yes, in the fact that obviously my first goal was healthy baby, healthy mama. No, in that I didn’t expect his actual delivery to be so traumatic for the both of us. Pushing him out was, hands down, the hardest thing I have ever done in my entire life and I can’t look back on the experience just yet without getting super emotional. I think it will just take time. I’m actually okay with the fact that I didn’t birth naturally. Honestly, I wouldn’t try to again either. Next time, I’ll probably ask for an epidural as soon as we roll up to the hospital. 🙂 The end result was a healthy baby boy so what more could I ask for? I really don’t know how I could have gone through labor without our doula. From constant encouragement to a vial of peppermint oil under my nose while pushing, her guidance and support was invaluable. Also, my husband deserves a medal. My love for him has just skyrocketed over the past week. 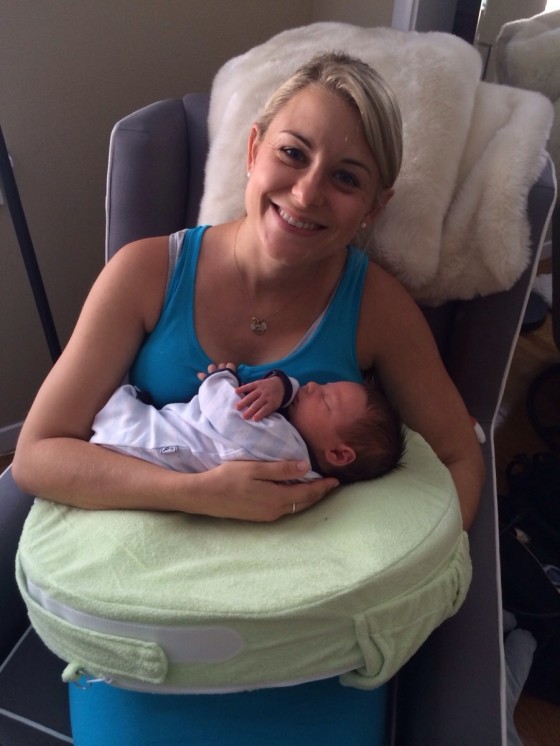 Thank you all so much for your sweet comments and prayers! We really feel incredibly blessed and happy with our little butterball! 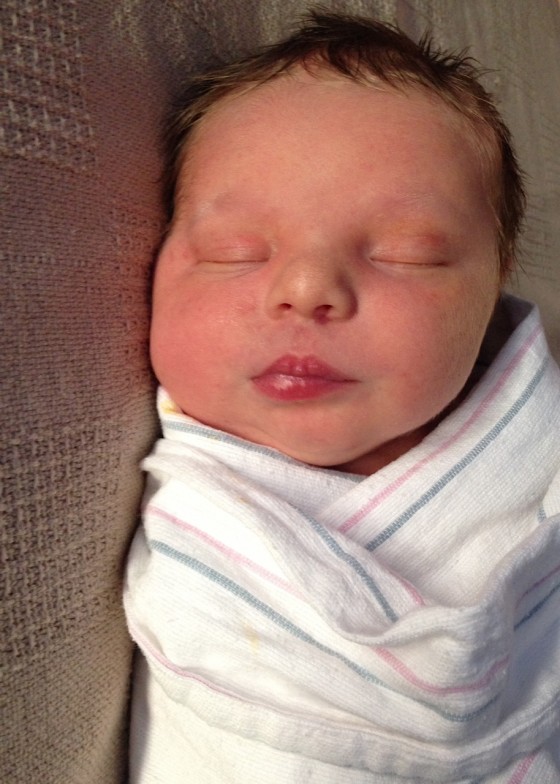 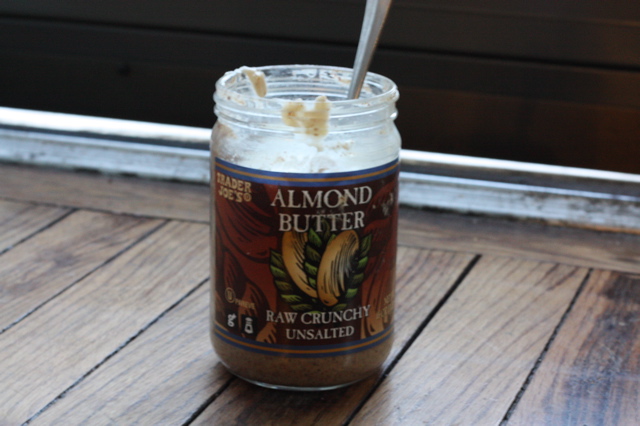 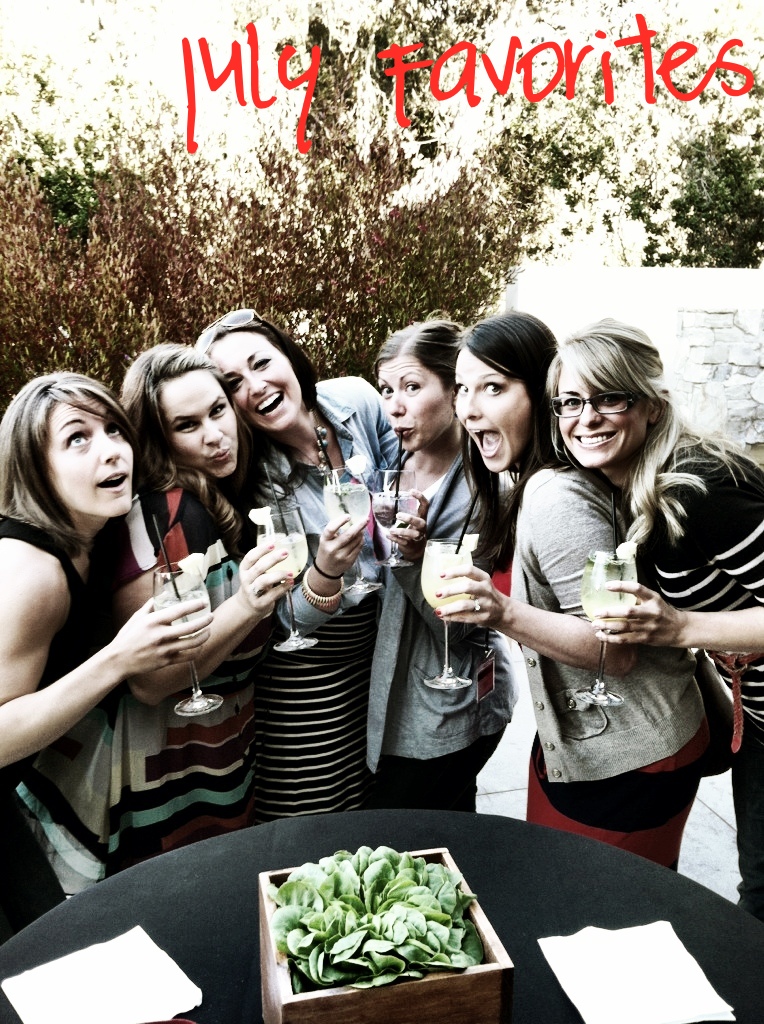 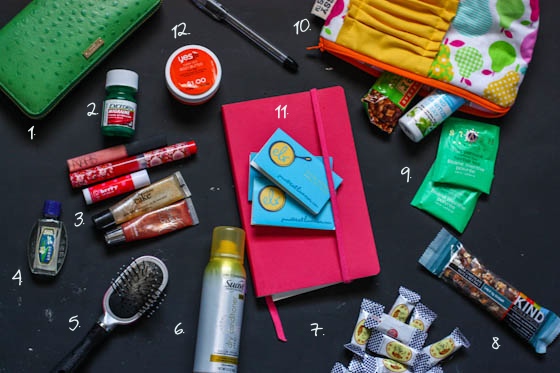 What’s In My Purse