Wow. Have you ever made yourself a meal without FULLY reading the directions and it ended up being waaaay more work than you bargained for?! More on that in a bit.

First of all, I have come to the conclusion that no matter what, I’ll never be a smoothie for breakfast type of girl. I need that big bowl of steamy carbs to jump start my engines. Sorry raw foodies, but I really do! I was STARVING again not even 2 hours later this morning and when I say starving, I mean tummy-aching-hunger.

Dr.Kracker + smear of whipped cottage cheese came to my rescue! I could literally hear my tummy going “ahhhhhhhh”

After snack & shower, I finished up my grocery list and hit the store. Sadly, I can no longer even pretend that I can afford to shop at Whole Foods. I hate it, but buying organic just is too expensive for me right now….especially now that I am buying food for two and not just myself! In the future I will definitely go back to mostly organic produce and Whole Foods but right now I just can’t swing it. Sigh.

I was pretty proud of myself this morning though because I managed to buy all this for only $72! I thought I did pretty good for $72, considering I got some expensive products like Fage, Ezekiel bread and wine. I still have to go back and buy low fat mexican cheese and butter for a recipe but I don’t know if I have the strength today.

So anyways, I put all the groceries away and flipped open the raw bible to the special recipe that I was SO excited to make for lunch today—-Thai Vegetable Wraps. I started with a very clean kitchen and laid out my two collard leaves, which the sweet produce lady at the store gave me for free since they had fallen away from the bunch. I had NO earthly idea how to make these into the cute tight wraps I see elsewhere on the blogworld so I (obviously) consulted Gena’s site as to how to do it. She gives a great tutorial here for us newbies. It seemed pretty easy and I copied her instructions exactly. Then I started to create the inside filling for the wraps and that’s when all hell broke loose.

To be fair, it was a wonderful recipe.

The final product was everything I dreamed it to be and tasted just like restaurant quality. Pretty proud of myself there. However, when you are working in a very very tiny apartment kitchen and there’s about 20 steps and bowls and utensils going on…….well, it can be a bit messy. I wish I would have been a more aware chef and cut the dressing in half because it called for an entire CUP of my coveted Trader Joe’s raw almond butter. Looks like I’ll be eating nothing but this slaw for the next few days…….it was pretty tasty though, I’ll give it that.

And then about an hour later I finally got around to assembling the wraps. I took each leaf and filled it with slaw topped with thin mango slices, carrot matchsticks, cashew pieces coated in a mixture of olive oil and sea salt and cilantro, mint and basil. They turned out very well but the wrap was quite loose. In total I used 2.5 collard leaves for my lunch but I really think I failed on the wrapping part. As I was eating them they totally fell apart and went everywhere. Oops My original plan was to make some fresh juice to have WITH my wraps but that idea was vetoed when I was yelling to myself in the kitchen and wanting to just give up and make a peanut butter sandwich.

Like I said though, they were very very tasty and filling! I loved the flavor combination and I’m a huge fan of anything Thai. I honestly don’t think I would make this again just for myself but if I was hosting some sort of raw dinner party someday I would definitely make it then…..just giving myself a lot of time and having a glass of wine ready and within reach.

I then cleaned the kitchen top to bottom and that was that! I’ve got a big bowl of  leftover spicy cabbage in the fridge now and 3 more collard leaves left so you can expect to see this again soon seeing as I refuse to waste all that good almond butter. I think that by making this lunch I have totally earned a not-raw snack later in the day so that’s what I’m going to have!

And now here is some random information:

I took a funny leap of faith yesterday afternoon and applied for a 6 month position as the new
Murphy-Goode Wine Lifestyle Correspondent out in Sonoma. Basically, its like American Idol (1 in a million chance) to get the position but after reading about the job I had to say “what do I have to lose??!” So my mom and I busted out the FlipCam and made my application video to send in. The deal is that you all have to go and vote for me for anyone to even give me a second look! It takes only about 1.5 minutes to watch my corny little video and vote so please do it…I would be very thankful! How funny would it be if I actually won?!

Click here to vote for Jenna as the next Murphy-Goode Wine Girl!

groceriesLunchRaw Wednesday ChallengeSnack
May 13, 2009 By jenna
111
Shake Me Cold Have A Little Faith 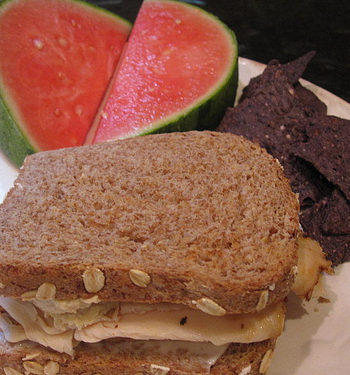 And Then I Ate