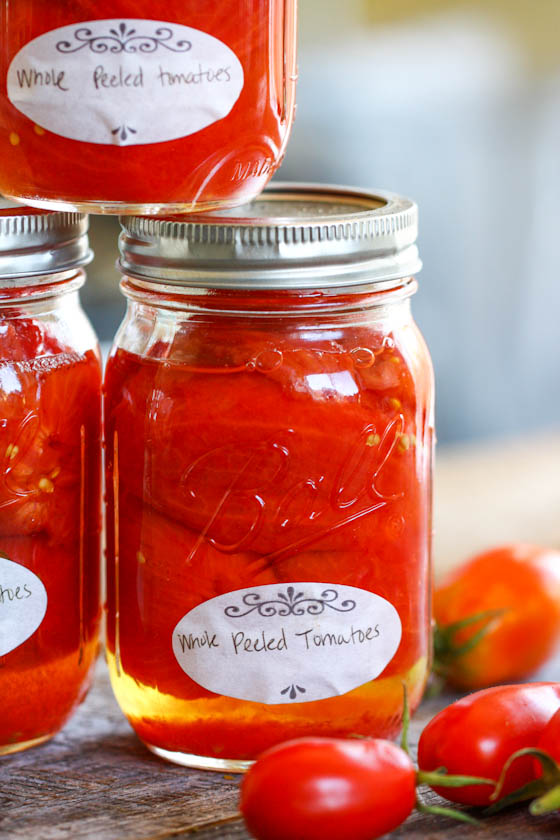 You will use these tomatoes on everything.

From pizzas, pastas, casseroles, chicken, grilled meat, shrimp dishes….I honestly can’t think of something they wouldn’t work on. Except maybe oatmeal. That would be weird. I mean, just think of how many times you run to the store to buy a big can of “whole peeled tomatoes” for a recipe. Never again! These raw-pack tomatoes are sooooooooooo much better than anything you could buy at the store. They don’t even compare! And honestly? They just take an hour to make and don’t require a crazy amount of kitchen skill. Swear it. 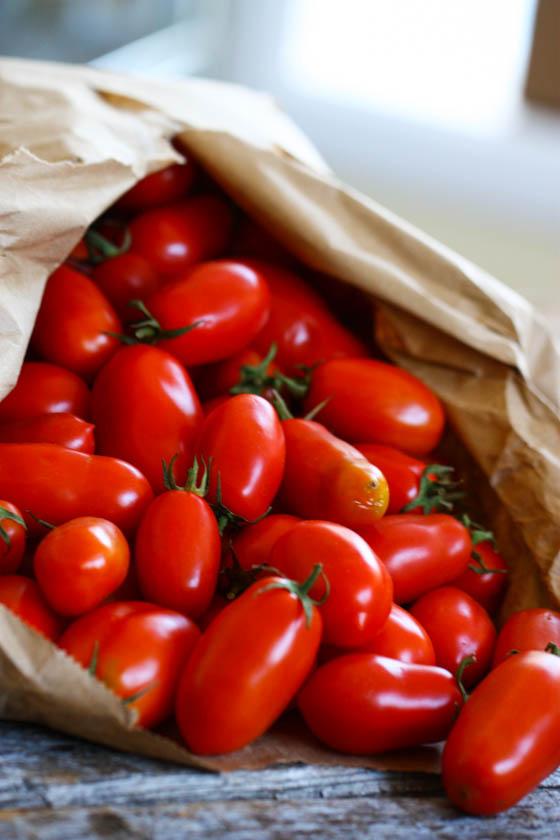 As I type this, I’m hoping and praying you can still find cheap (ish) tomatoes at your farmer’s market. I know we can, but we live in California. I bought 7 lbs of beautiful San Marzano tomatoes this morning at our market for $21 and I’m going back this weekend to buy more! Unfortunately, I really don’t recommend you try this with regular supermarket tomatoes. Find thee a farm stand, local market or farmer friend! The taste and quality of fresh tomatoes is unmatched by those frigid things at the store. 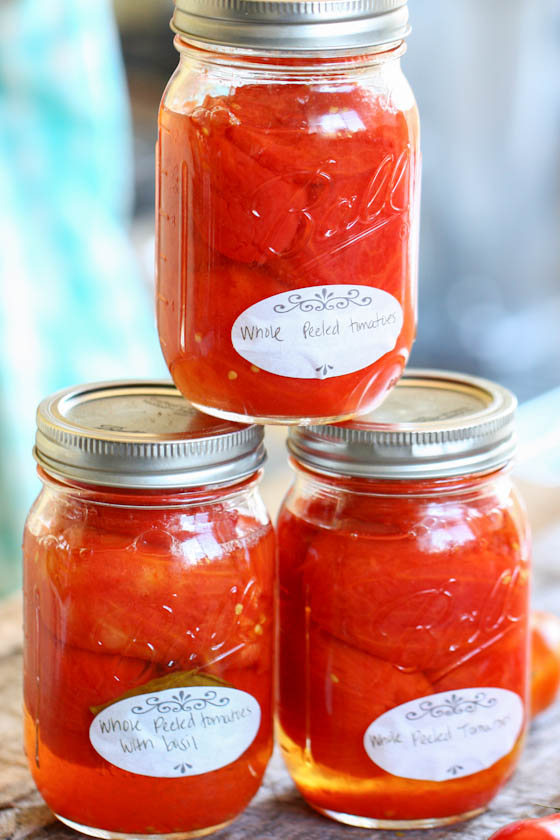 So, I know I’ve made everyone aware of my canning addiction. I started when I was pregnant and just can’t stop. I’m turning into a food hoarder! It’s bad, people. I average two new canned goods a week, canning late into the night when I clearly should be sleeping since, um, I have an infant and all. But I just.can’t.stop. I don’t know why, really. I’m just addicted to canning!

Canning raw-pack tomatoes is my absolute favorite way to preserve tomatoes! Why? Because it’s so easy and doesn’t involve you trying to remove every last little seed. All you do is blanch the tomatoes to easily peel them then stuff them in jars with boiling water and a dash of citric acid. And, please, for the love….PLEASE DON’T FORGET THE CITRIC ACID. 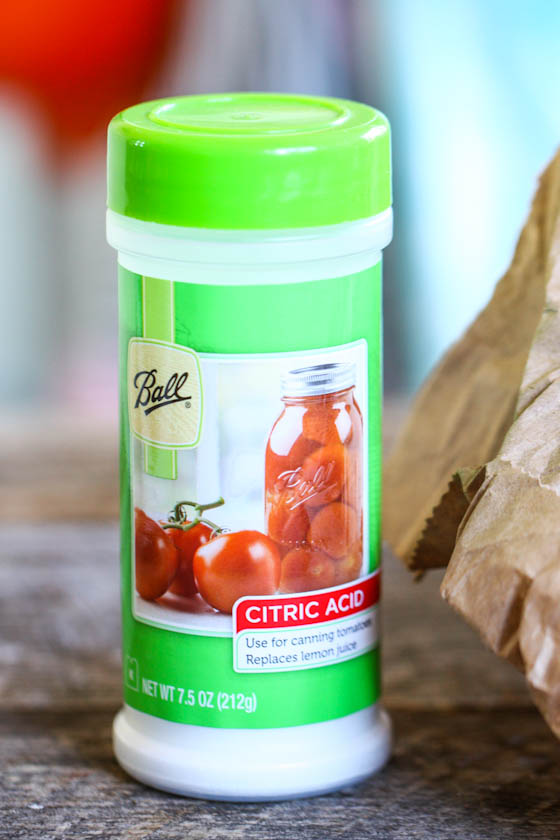 This guy makes your tomatoes safe to sit on the shelf for a year! You can find it usually wherever canning supplies are sold.

Raw-pack tomatoes have the most intense flavor of any preserved tomato product because you don’t cook the tomatoes beforehand (except for blanching them). Try them crushed in pasta sauce or on pizzas…divine! 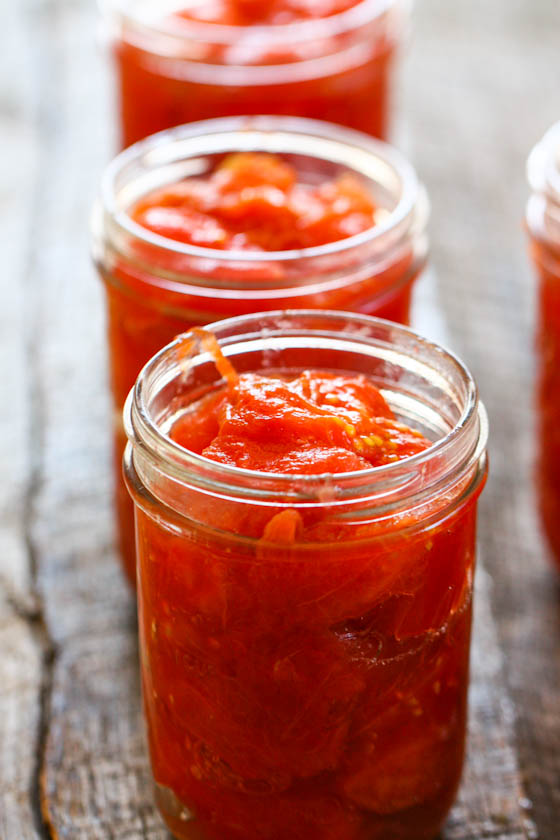 I can’t say enough good things about canning your own tomatoes this way. It’s a really fun weekend (or, ahem, late night) activity that you will be so happy you did come January and you are stirring them into a homemade marinara sauce. Your whole house will smell like summer again! Just try it. Oh, and for a fun variation you can add a fresh basil leaf in the jars right before you top off with boiling water. You’ll thank me later. 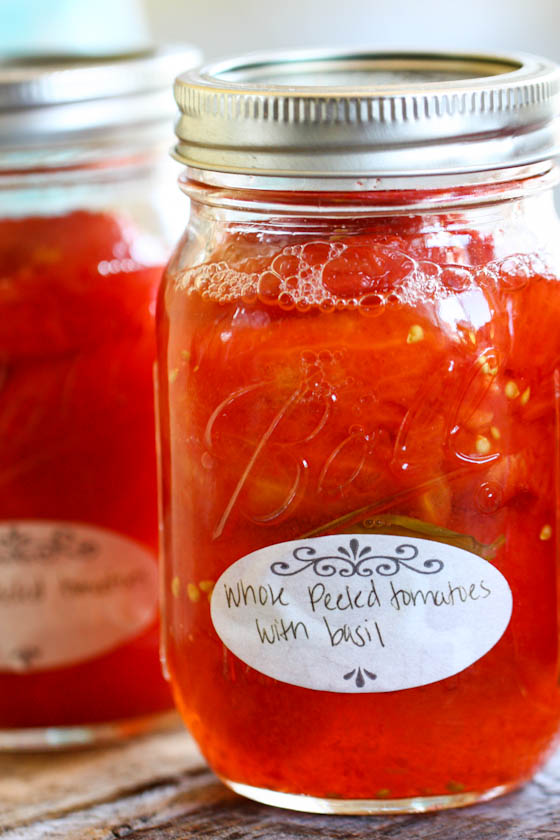 Wash your jars, lids and screw bands well in hot soapy water. Set screw bands aside and place the lids in a small saucepot with water. Place on the stove and turn heat to low. Place clean jars in a LARGE pot. Fill the pot with water and bring to a rolling boil. Boil jars for 10 minutes to sterilize.

While your jars are sterilizing, core the tomatoes with a small pairing knife. Not sure how to do it? Here’s step by step directions.

Bring another large pot of water to a boil on the stove. Fill a large bowl with ice and water. Set this next to the stove near the pot of boiling water. Place one more empty bowl next to the ice water bowl. Now your station is set and you’re ready to go!

Once water is boiling, add half the cored tomatoes. Boil for one minute then quickly remove tomatoes with a slotted spoon to the ice water. Repeat with remaining tomatoes. Once all the tomatoes are in the ice water, gently slip off their skins. Place peeled tomatoes in the clean bowl next to you.

Turn heat to high on the small pot with the jar lids. Bring to a boil. Bring a kettle full of water also to a boil.

Using tongs, carefully remove the jars from the boiling water. Place 1/2 tsp citric acid at the bottom of each hot jar. Pack peeled tomatoes in the jars and then carefully pour in boiling water from your kettle to top off, leaving 1/2″ headspace at the top of the jar.

Place boiled lids on jars and screw bands on. Be mindful not to screw the bands too tight! Screw them looser than you think and you’ll be fine.

Place jars of tomatoes in your large pot (the same pot that the jars were sterilized in). Put the lid on the pot and bring to rolling boil. Boil for 40 minutes (high boil) for jars to process. Remove jars from boiling water carefully with a jar lifter (available at hardware stores or online). After a few minutes you should be hearing the lids pop slightly to seal. Do not disturb jars for 12 hours! Jars that do not seal can be placed immediately in the fridge. Jars that do seal can be left in dry storage for up to one year. 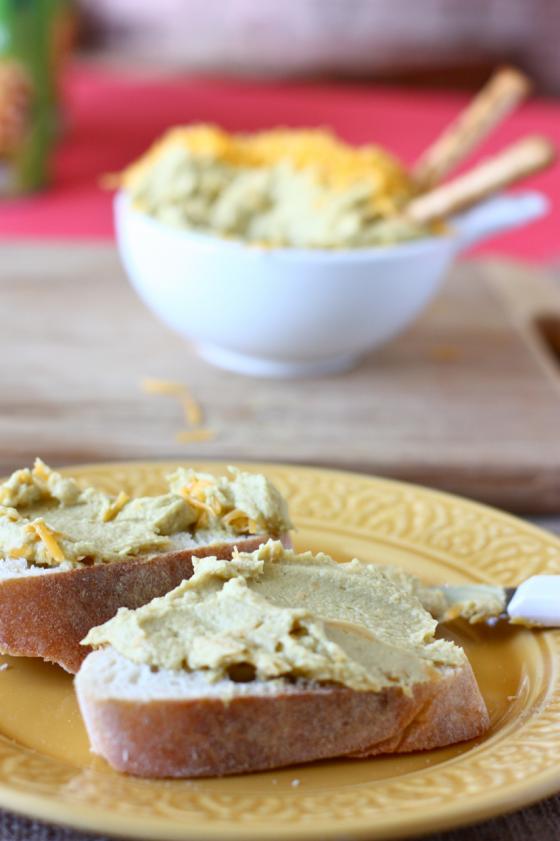 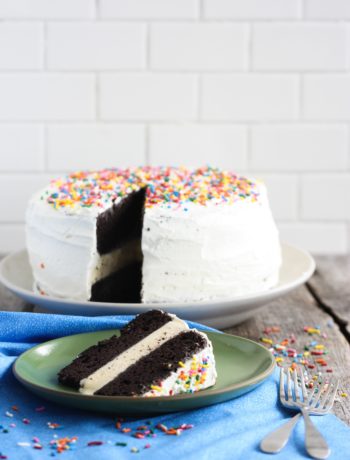