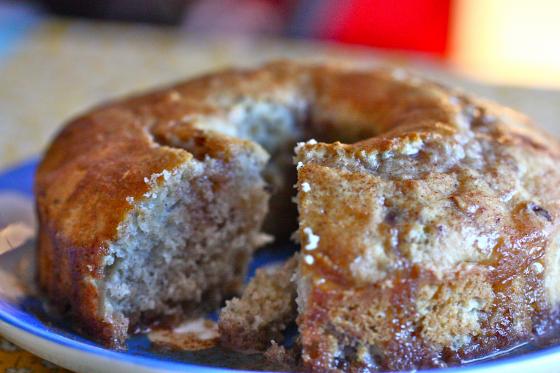 Truth is, this Project Food Blog challenge stumped me.

I’ve gone back and forth all week on what to do…should I go simple, like an omelet? Or try something super complex like chocolate tempering or mazipan? It kinda stressed me out.

See, the instructions for the challenge simply said to post a “step by step photo recipe post”, something I do practically every day. But, I knew that to stand out from the crowd I had to do something special…something I don’t normally do in my daily recipe posts.

So, I went old school….all the way to a small town in Minnesota during the first World War, in fact. A small town where my great-grandma worked as a cake decorator, baking sweet cakes and fragrant loaves of bread all night long while wars and blizzards roared outside… 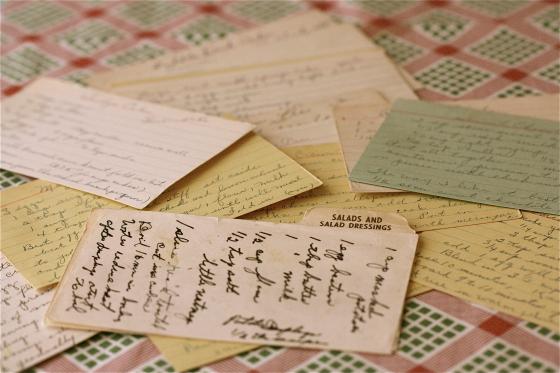 So, story-time real quick and then I promise we’ll get to baking. It all started back in 2005 when, on a break from college, I stumbled upon a very retro box of old fashioned recipes hidden in my grandmother’s attic. 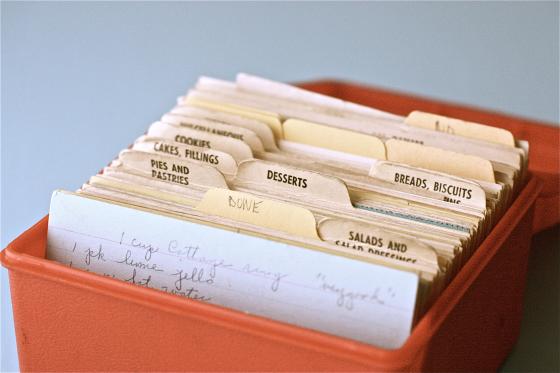 Turned out, they were all of my great-grandma’s recipes, dating back all the way to 1915!

Instantly, I was intrigued and wanted to know everything I could about this woman who I never had a chance to know. Over the next few days, I learned that she was a baker and a very talented cake decorator. When she was just my age her husband got sent to France during the war and, as means to support her family until he came home, she opened up a small bakery.

Only he never came home…

I can’t even imagine.

Even though I don’t remember her (she passed away when I was two),  I think about her a lot. Stumbling upon her recipe box that day directly inspired me to go culinary school, and I like to think that on top of inheriting her recipes and kitchen tools, I also inherited her strong spirit and passion for baking.

Yesterday, these came in mail for me from my mom. 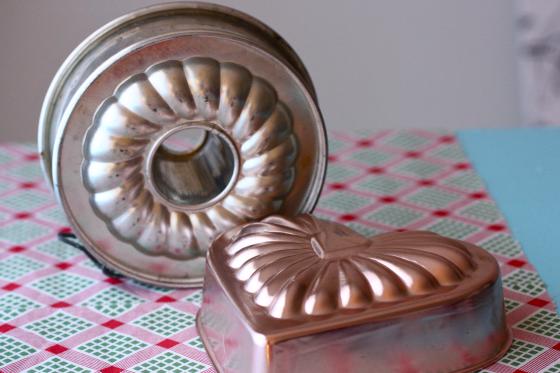 Right away when I held her perfectly tarnished cake molds in my hands, I knew what I would do for this challenge. I like to think she would have liked this, too….it seems like something she would have made. 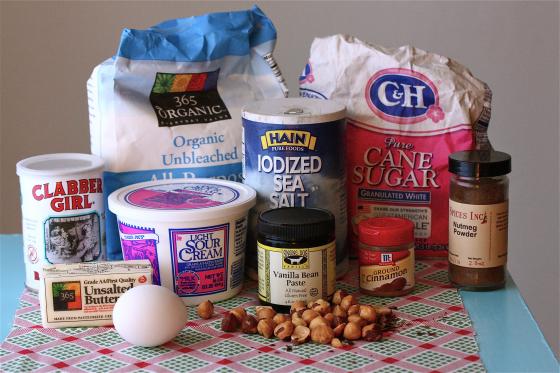 Keep in mind that the measurements I used for this recipe yield a mini bundt cake. To make a regular sized cake, triple all ingredients!

So first, roughly chop your hazelnuts to equal a fourth of a cup. You could also use chopped walnuts if you prefer! 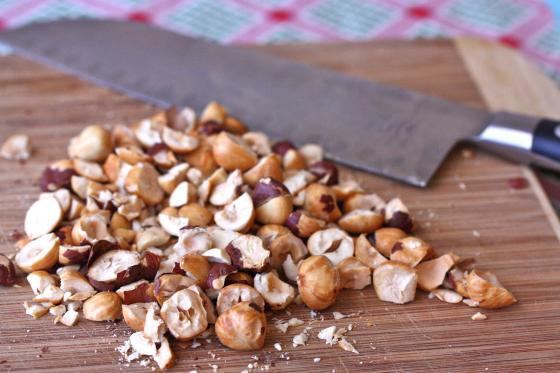 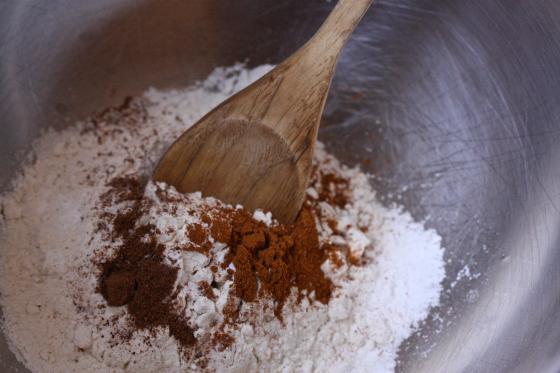 Cream four tablespoons of soft butter and a fourth cup of sugar together for about three minutes, until light and fluffy. 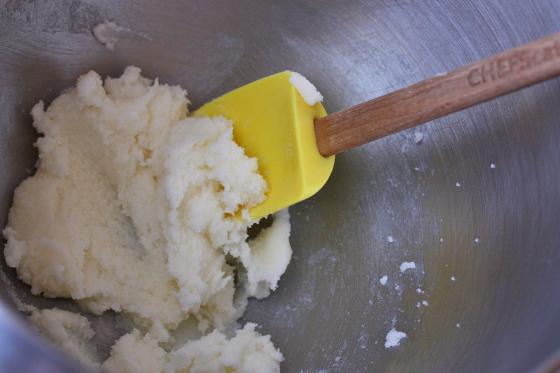 And then, while the mixer is still running on low, add one egg yolk (save the white!) and half a teaspoon of vanilla. 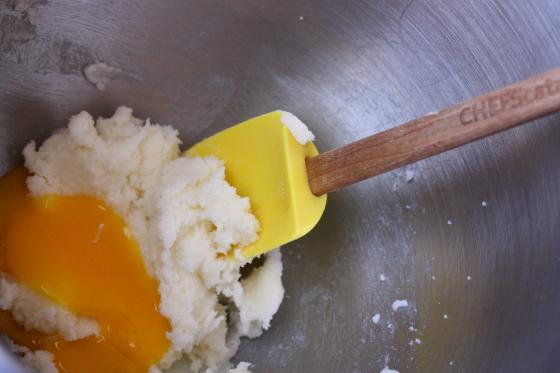 After that’s all combined and smooth, measure out one third cup sour cream. Add half to the butter mixer (while the mixer is still going) and then add half of the flour. Once that’s combined, add the other half of the sour cream and the rest of the flour. Be careful not to over-mix here…it will be thick! 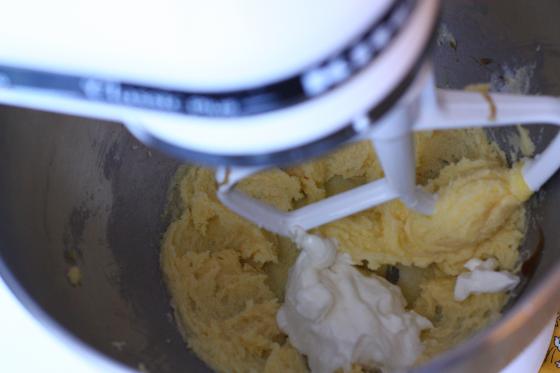 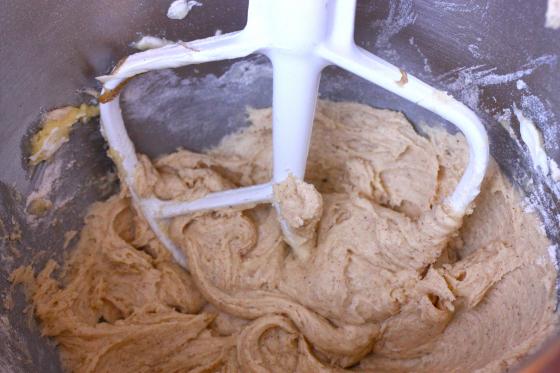 Now here’s where things can get tricky but just follow my lead and I promise, you’ll be fine. Scoop out the batter into a different bowl, go wash this bowl and then whip your egg white on high until it forms soft peaks…..and then fold your chopped hazelnuts in. 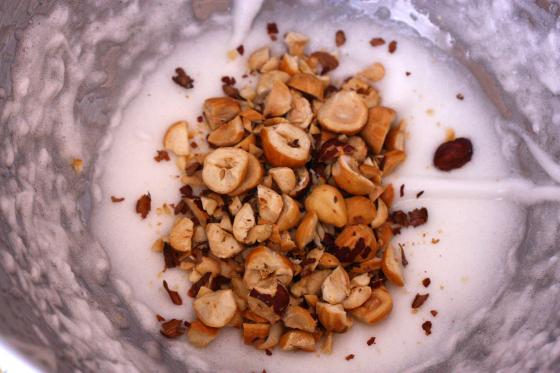 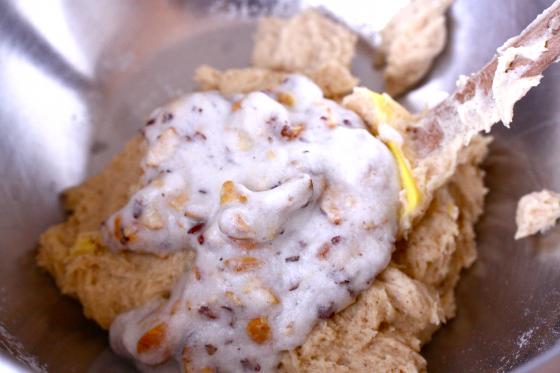 Gently fold! The whipped egg whites are what gives this cake lift. You don’t want to crush them and end up with a flat bundt.

No one likes a flat bundt! (humor me…please?)

Now, butter your bundt. Please use butter for this, not cooking spray. 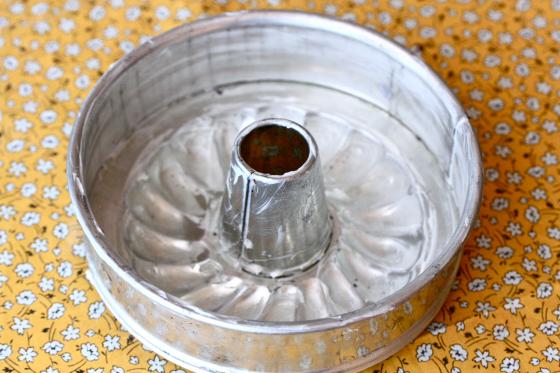 Scoop batter into the pan and gently smooth the top. It doesn’t have to be perfect! 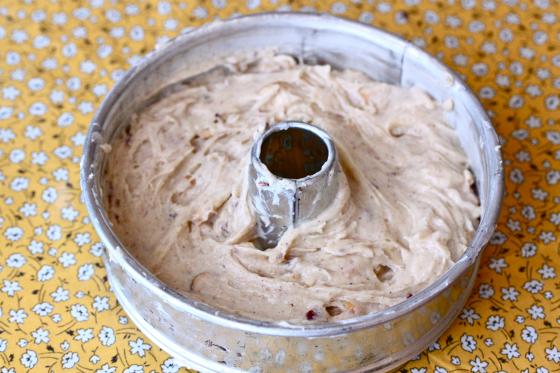 Bake at 350 for about twenty five minutes (longer if you have a larger cake!).  You’ll know it’s done when the sides start to pull away from the pan and the top is golden brown. 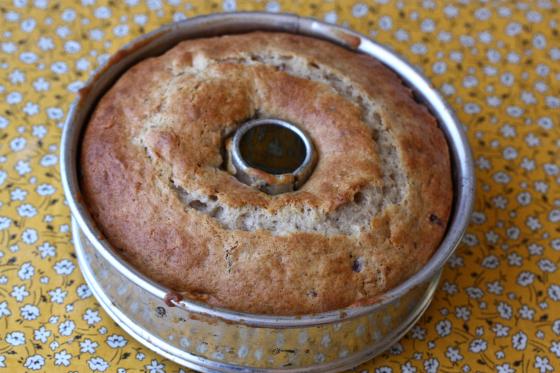 Now we will take a brief intermission to wash the dishes. It must be done! 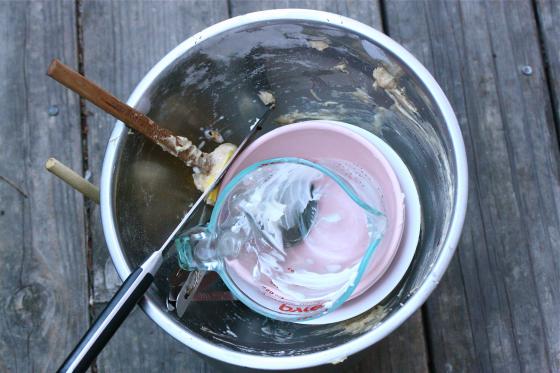 When the cake is cool, gently release it from the pan. You definitely want to run a knife underneath to make sure it’s not sticking…that would be bad. 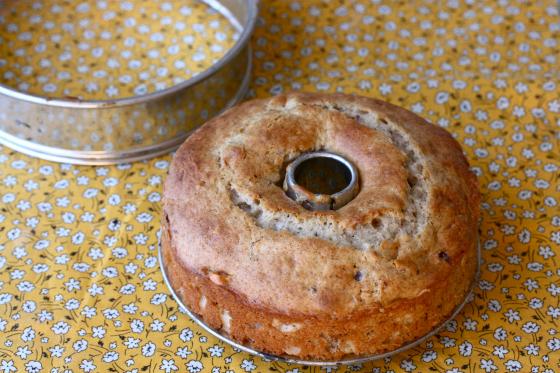 Release the urge to eat while you make the icing and let the cake cool completely. 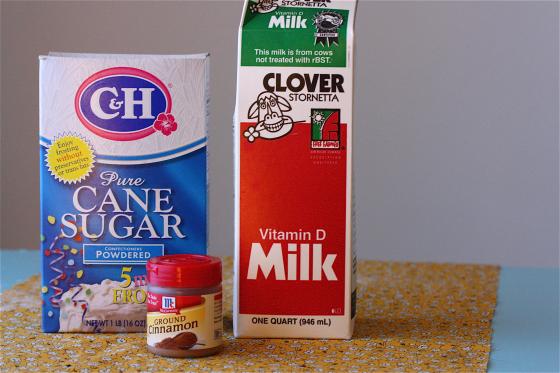 In a small bowl combine a fourth of a cup of powered sugar with two teaspoons milk and a teaspoon of cinnamon. 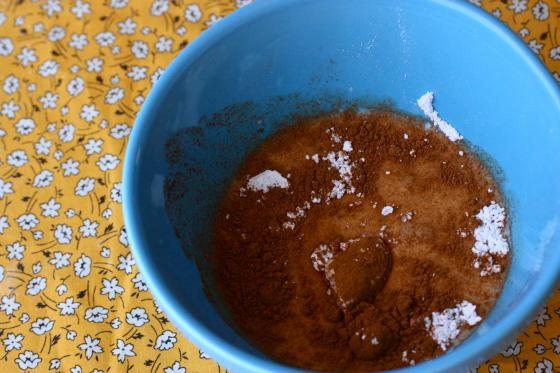 Yummy. Now whisk together and drizzle liberally over the now-cool cake. Ridiculous! 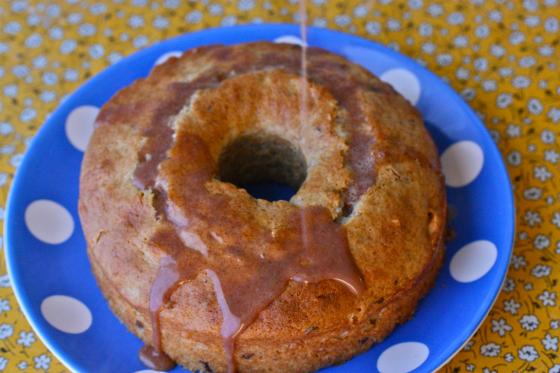 You may now eat. Amen.

Inspired both by Grandma Rueland and Gourmet

Butter a mini bundt pan and preheat your oven to 350.

Sift together the dry ingredients. Set aside.

Cream the butter and the sugar for about five minutes. While the mixer is running, add the yolk and the vanilla and mix well.

Add half the sour cream alternately with the flour mixture and beat until smooth. Set aside.

Whip egg white until soft peaks appear. Fold in the chopped nuts and then gently fold into the cake batter. Scoop batter into prepared pan and bake for about twenty five minutes, or until golden. Let cool and make glaze.

Whisk together all glaze ingredients. Drizzle over cake.

Enjoy with those you love. 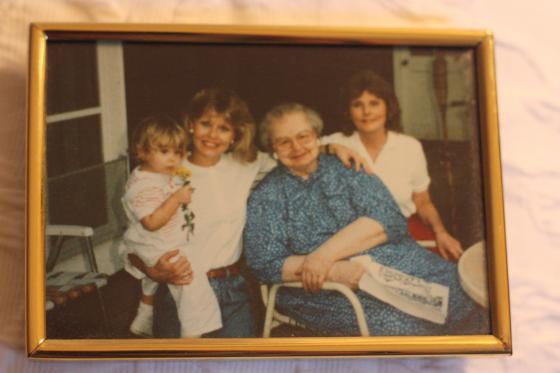 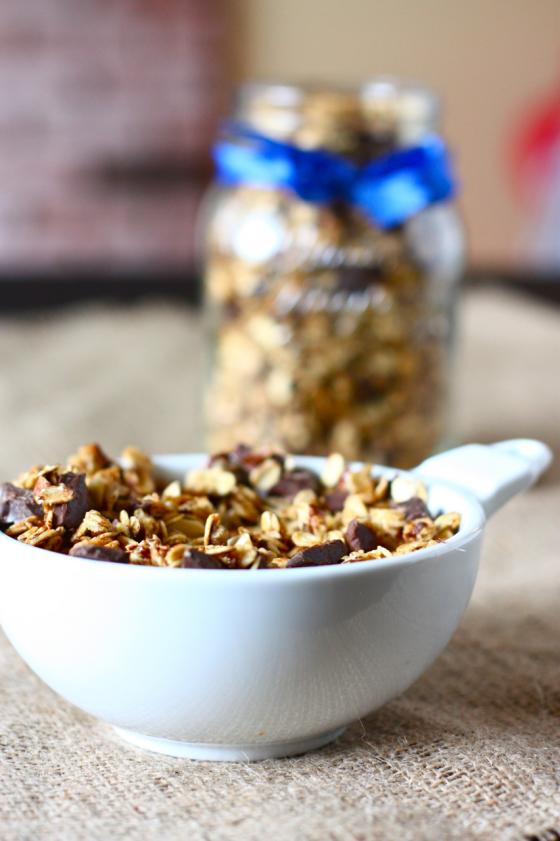 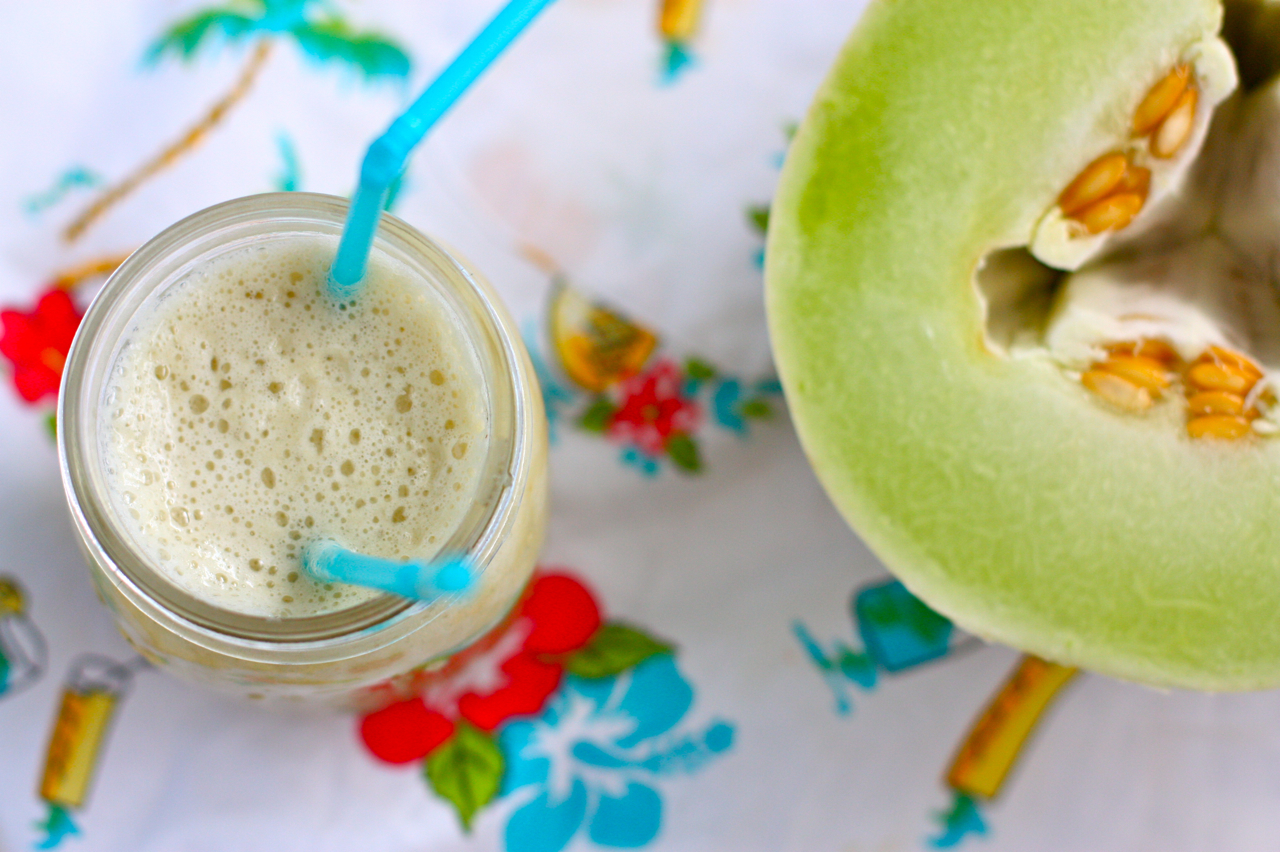