My chicken enchiladas are probably one of the top five most requested recipes from this website. I posted the original recipe for them way back in the day, when I was still in school and it my favorite meal that reminded me of home. Since moving out on my own, I’ve made them countless times for many different people and they’ve always been a hit. In fact, I’ve always sworn by my easy recipe. That is until my mom came and visited and made me a her version of chicken enchiladas, anyway.

My mind was blown….they were so incredibly tasty! Instead of a creamy filling like I had always used (a mixture of salsa and sour cream inside the tortilla), her version was filled with a rich cheesy chicken sauce. I had no idea how she did it. I finally got around to asking for the recipe only a few days ago because Almanzo and I have decided to do a “cook-off” where we battle each other for the best homemade dinners (more on that to come) and I needed to whip out the big guns.

I made these last night and they were a huge hit. Even better when followed by peach pie, no doubt! 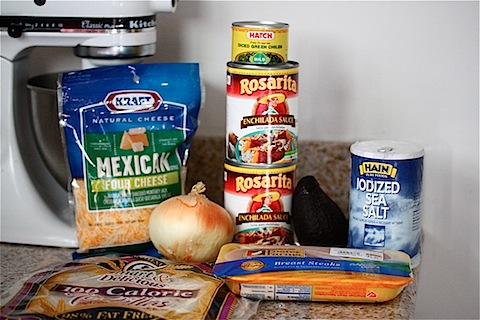 I did my grocery shopping at the smallest store known to man yesterday in Fulton, California after feeling incredibly lucky finding those gigantic peaches on the side of the road. I wasn’t so lucky at this grocery store though, which shall remained unnamed, because they had a VERY limited selection of Mexican food and only two kinds of tortillas to choose from. I went for the light (100 calorie) type because the only other option were burritos the size of magic carpets that had about five hundred calories in each one. Totally normal.
Anyways. First things first. Wash and cook your bird. 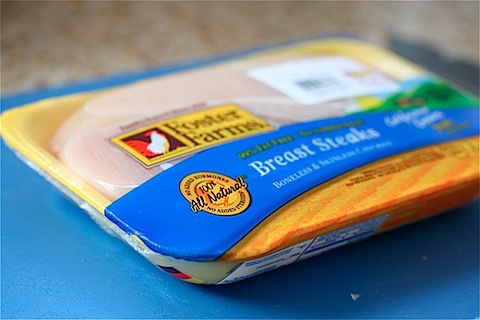 I’ve always found the fastest, easiest way to cook chicken when making enchiladas is to poach it. So to do that, fill up a large pot with water, drop the chicken in and simmer for about ten to fifteen minutes, or until the chicken has cooked through. Always be sure to cut into the thickest part with a knife so you can make sure it’s done.
When it’s done, drain and plot down on your cutting board. 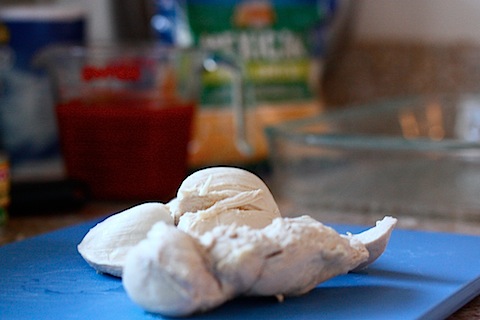 Now, normally you would want to cool the chicken before preceding to the next step. However, if you have little to no patience like me, or if it’s already seven thirty at night and you’re starving, you may want to sacrifice the tips of your fingers and move on to the next step, which is pulling the chicken apart with your hands into small pieces. 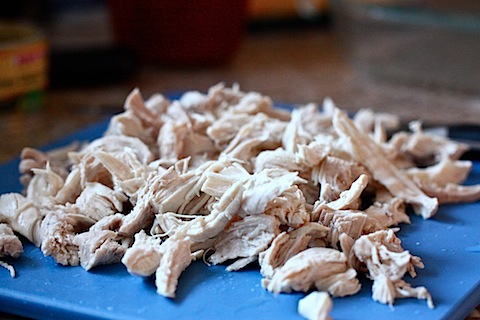 This is also how you would prepare chicken to make chicken salad. I’m hungry right now and dreaming up a chicken salad with grapes and walnuts in it…mmmmmm
Now set the chicken aside and move on to making the onion and garlic mixture. You’ll need one yellow onion and three cloves of garlic for this. 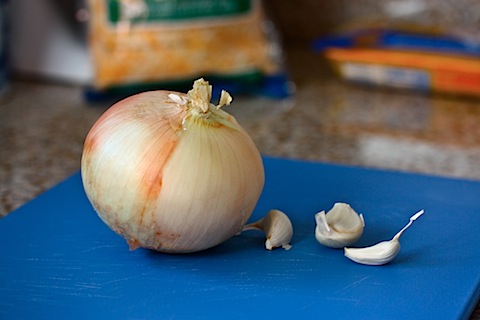 And now, I briefly interrupt this blog post for a little onion chopping tutorial. Everyone seems to do this differently but this is what works for me. First, slice the onion into two parts, right down the middle. 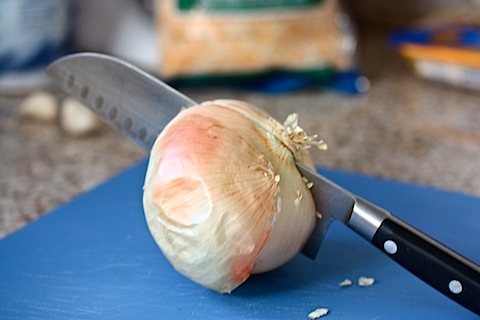 Lay said onion parts cut side down on your cutting board. 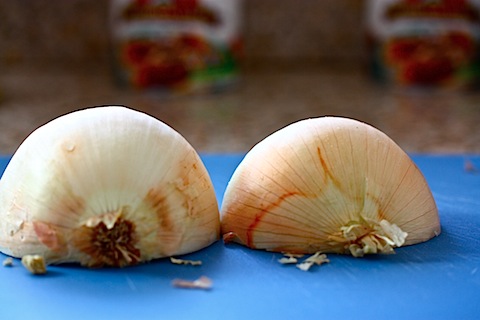 Peel off the onion skin and then using your knife, make lengthwise cuts from the bottom right up to the top. Be sure not to cut off the top though because that’s what holds everything together! 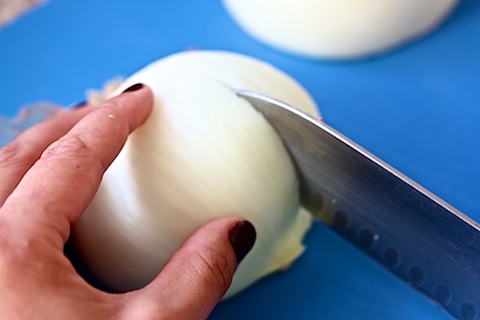 Wipe a few tears away then make cuts going the other direction so your onion now resembles a checker board. Sorta. 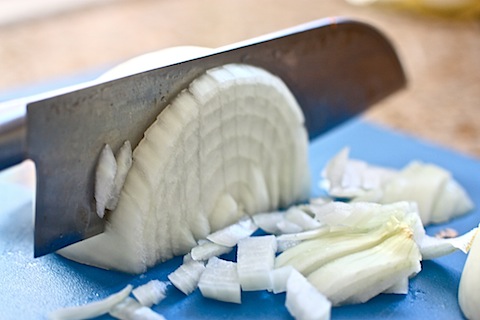 This time, slice all the way through right up to the top so you have even little dice. 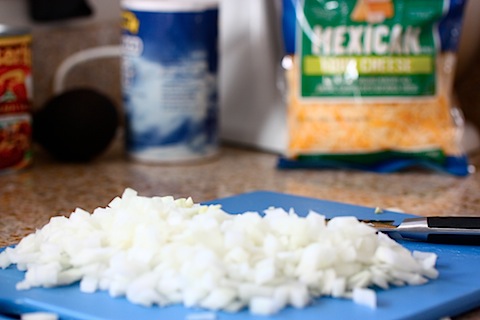 I usually take my knife and give it all one last karate chop though to get rid of the ugly ducklings in the group. I’m sure there are easier ways to cut an onion but this is what I was always taught and it works for me!
Okay. Interruption over. Now it’s back to business. Along with the onion, mince the garlic and then toss everything in a skillet (hello, cast iron!) with a tablespoon or so of oil. 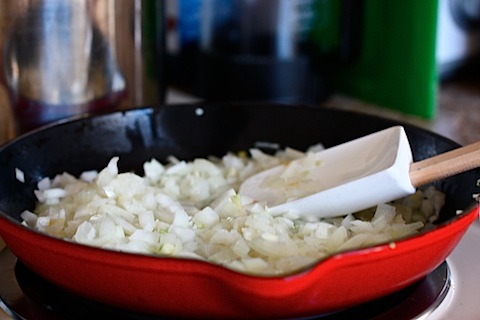 Cook the onion and garlic over medium/low heat for about ten to twelve minutes or until they begin to turn golden. BE CAREFUL NOT TO BURN YOUR GARLIC!!!!!!!!!! Burning garlic is a terrible, terrible thing. We all do it now and then (I’ve done it countless times!) but there’s really no way to remedy that situation other than starting completely over. Burned garlic has the potential to totally ruin a dish so be careful and stir often. I warn.
When you’ve got it right just, take off the stove. Move back to your chicken. Dump the chicken into a large bowl, add the onion and garlic and one and a half cups of enchilada sauce 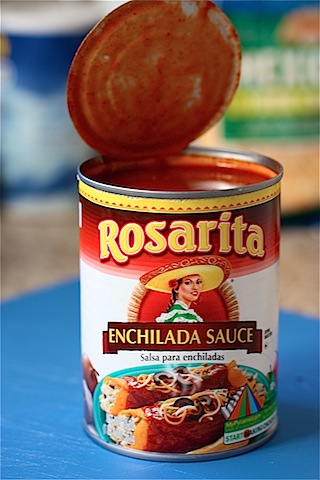 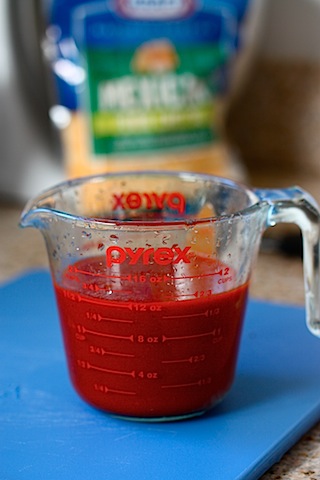 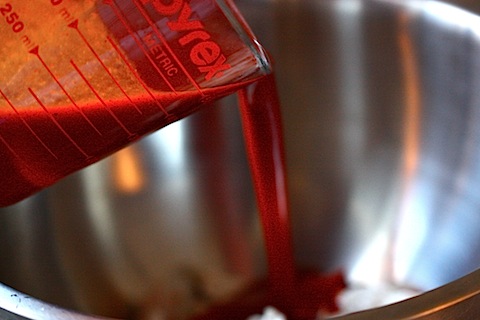 One can of green chilies (or two, like my mom says) 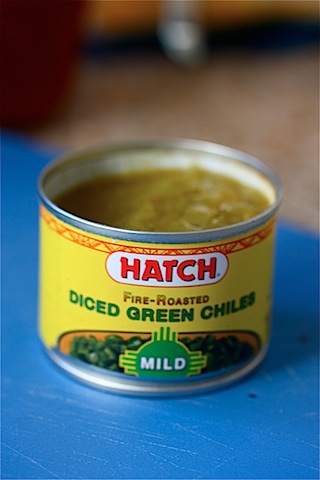 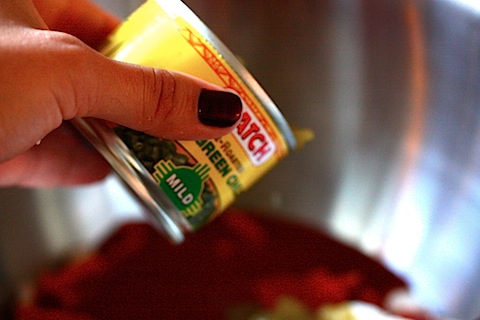 Plus one cup of cheeeeeeese! 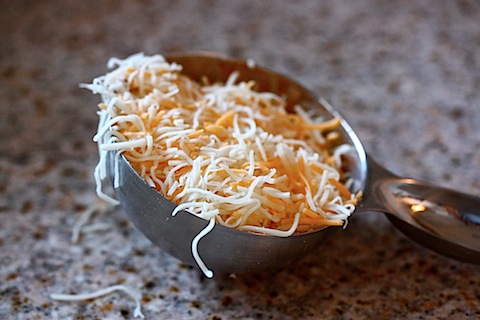 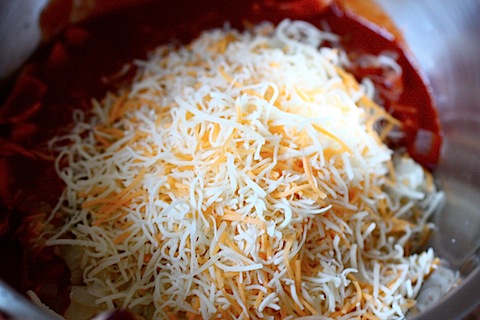 And a pinch of cayenne if you like it hot. Stir it all together now…. 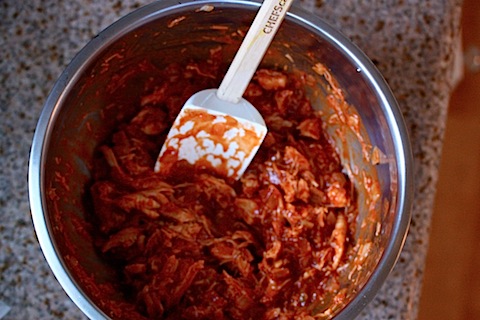 And get your oven preheated to 425. Pour some more enchilada sauce in a large glass casserole dish 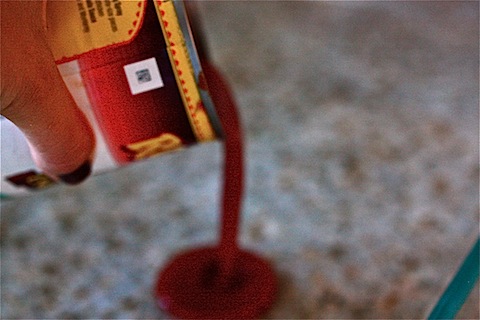 And then fill your tortillas. Lay each tortilla flat on the counter and fill with about a quarter cup of the chicken mixture. Roll up and place seam-side down in the dish. 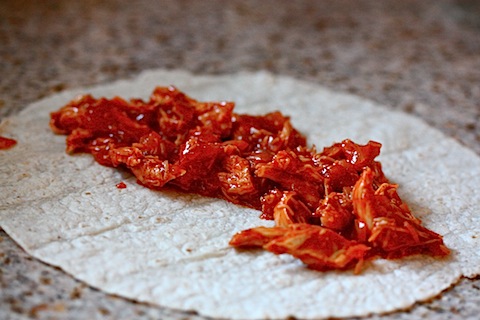 Wrap, roll and repeat! And then pour more enchilada sauce all over the top. 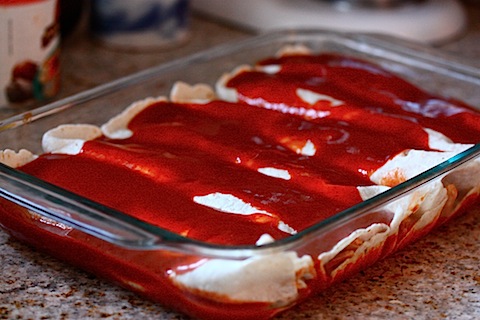 Ain’t they cute?!
Sprinkle another cup of cheese on top 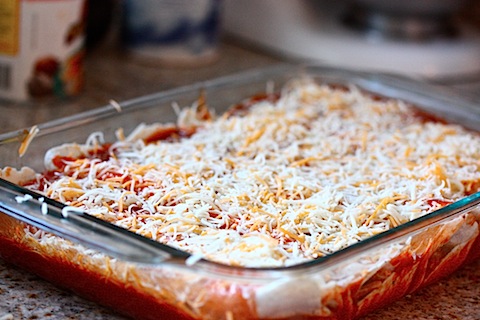 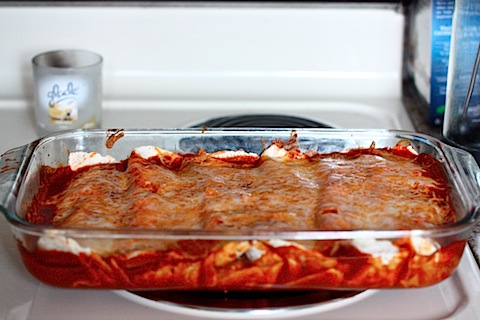 Now, stuff your face. As for me, I like to drown my enchiladas in so much hot sauce that I lose all feeling in my upper body. If that’s not your style, simply eat daintily with a fork and knife and maybe garnish with a few creamy avocado slices.
Here’s the recipe:
Mom’s Green Chili and Chicken Enchiladas

Preheat the oven to 425. Chop the onion and the garlic and cook in the oil in a pan over low/medium heat for about ten minutes, or until the onion has started to caramelize. Make sure you don’t burn the garlic! Once this is done, take mixture off the stove and set aside.

Rinse the chicken and then poach in a large pot of simmering water until done. This will take about ten minutes or so; be sure to cut through a piece to check if it’s cooked through! Drain the cooked chicken and set aside to cool.

Once the chicken has cooled, use your fingers to shred it. Mix the chicken with one and a half cups of the enchilada sauce, one cup of cheese, a pinch of cayenne and the onion and garlic mixture. Stir well to combine.

Pour half a can of enchilada sauce in a large glass casserole dish. Fill each flour tortilla with about one fourth cup of the chicken mixture. Roll up and place seam-side down in the dish and repeat with the remaining tortillas. Once you have filled up the dish completely, pour another cup of enchilada sauce on top and sprinkle with the remaining cup of cheese. Cover loosely with tin foil and bake for 10 minutes. Remove foil and bake for another ten. Cool and serve with hot sauce, avocado slices and salsa.

I ate all my peaches and am seriously considering driving all the way back to that tiny roadside stand for more.

Wondering if leftover peach pie would make an acceptable lunch.

Pin It
chickenCookingDinnerkid-friendlyold favoritesrecipesweeknight meals
August 18, 2010 By jenna
98
peach pie with the best pie crust My Soul Shall Sing