I don’t know what prompted my great grandmother to name these extra thick, cake-like molasses cookies “ginger cremes” but she did. There’s something so quintessentially old fashioned about molasses cookies, and I was so excited to find this recipe because most molasses cookies I’ve tried in the past have been a little too thin and crisp for my taste.

These, my friends, are not. I was a little leery of the recipe because it called for a whopping 1/2 cup of molasses but only 2 cups of flour. And after I mixed them up and put them in the oven to bake, I sat down on the floor of my kitchen and anxiously watched them rise. Oh, and rise they did! Let me tell you, they turned into the most pillow-like, thick, cakey molasses cookie that I’ve ever tried. Think pumpkin whoopie pie….but ginger.

Simple old fashioned cookies like this make me so happy and so sure of myself that I’m in the right industry. I mean, who else gets ridiculously excited and dances around the house alone because of a cookie? There’s nothing fancy about them and they are pretty much the direct opposite of these bad boys. However, I think it’s their simplicity that makes them so special. They aren’t overly sweet or overly spicy, and if just a liiiiiiittle thicker, might even be called a muffin. They are positively retro in every way, from the shortening, to the whopping half cup of molasses and to the “baking soda dissolved in hot water”. They taste exactly like little mounds of old fashioned gingerbread (the cake, not the cookie) and would probably also be great drizzled with a little flat icing.

Next time, I might try sandwiching them with some buttercream. But for now, I’m happy to bake and eat them the way great grandma most likely intended—with a cup of tea. Preheat oven to 400 degrees. Cream together the shortening and the sugar until light and fluffy, then add the egg and molasses and beat well. In another bowl, whisk together the flour, salt, ginger, nutmeg and cloves. Alternate adding the dry ingredients with the baking soda water to the sugar mixture, beating well after each addition.

Drop large spoonfuls of dough on lined sheet trays and bake for eight minutes, until puffy.

Pin It
cookiesRecipe Box Challengeseasonal
November 7, 2011 By jenna
70
here's to you the freezer section 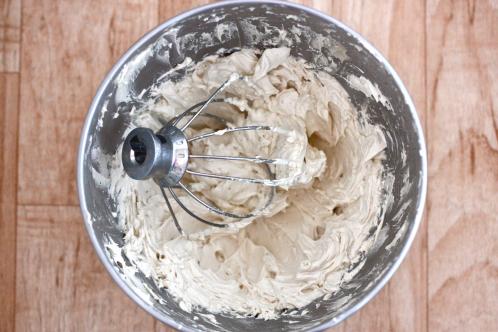