Well it was definitely another long day in the kitchen over here. We had some power outages due to the storms, so that made it especially tough to bake! However, I persevered and finally everything came together. 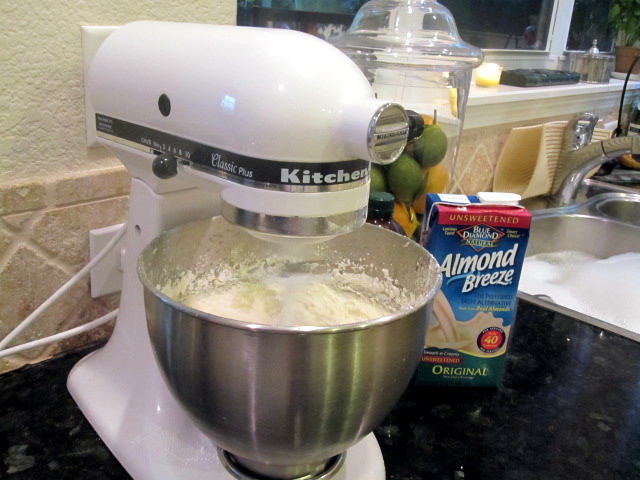 Woot woot! Now I just really hope people buy all this stuff or I’m going to have a TON of delicious baked goods in my kitchen!!!! Dangerous!

The Vegan Lavender Walnut Blondies were the hit of the day. Remember when I was still in culinary school and made a chocolate lavender cake for my practical? Seems like an eternity ago but the cake was aaaamazing and that’s how I got the idea to make lavender blondies today!

They came out way to good for me to keep the recipe to myself. I started with VeggieGirl’s basic blondies and adapted the recipe by changing the white sugar to brown (for a more caramel flavor) and adding dried lavender buds and chopped walnuts. Very holy yum indeed! 2 6-ounce coconut milk yogurts, plain or vanilla flavor (I used one of both)

In a large bowl mix together the yogurts, sugar, molasses and oil. Stir well to get rid of any clumps. Sift in the flour, baking soda and sea salt. Stir to combine wet and dry ingredients and then fold in the lavender buds and chopped walnuts.

The double chocolate cupcakes also came out really, really well. Perhaps I shall post my recipe for those tomorrow night? 😉 They literally were the moistest cupcakes I’ve ever made!

To keep myself from eating the entire kitchen, I snacked on an Odwalla bar while I baked— And later had a cranberry soda for a pick-me-up 🙂 And then Ryan and I went out to Paci’s around 8:30. OMG, the pizza was so good! No one could believe it when we EACH ordered our own large pizzas! Can you guess whose was whose?! 😉 Yep, Ryan got sausage and pepperoni and I got a margherita pizza!! We each ordered our own (large was the only size available) because a) we can’t agree on pizza toppings and b) I wanted a ton of leftover slices to take to my parent’s house for lunch tomorrow!

The margherita pizza was AWESOME. Get this, I ate THREE of those super large slices and I don’t even feel full right now! What is wrong with me?! The crust was just so thin and the cheese was very light. Mmmmm When I reached for a third slice Ryan goes “who are you??!” But it really was light and not greasy in the slightest bit. And I was hungry….so sue me!!

I also had my first Blue Moon since they only had beer, no wine. I actually liked it–huge surprise! I’m definitely NOT a beer girl but this was actually refreshing!

No gelato for dessert—-we just rolled our pizza bellies on home.

Elastic waist pants, here I come! Alarm going off at 6:30 for the garage/bake sale tomorrow! If you are in the area, stop by and see me 🙂 I’ll be out there all day long helping my parents and selling my ware.

dinner outpizzarecipesSnack
June 26, 2009 By jenna
72
Really Goode How Low Can You Go?