I’ve had a pretty productive Memorial Day while the boy was out of the house. I got to thinking about baked beans to go with our hot dogs and I was going to buy some at the store, but then I was like well why don’t I just make them myself?! So I did. And they turned out fab-u-lous. If I do say so myself. I used my recipe for Homemade Baked Beans that you can find here and the only drawback is that they do take an hour to bake! But during that hour they develop such a deep caramelized flavor almost….I just can’t get enough. This recipe freezes beautifully as well so I always double it. I like to have leftover homemade baked beans on whole wheat toast for lunch sometimes—try it! To get my groceries I did go to heaven Whole Foods again. Sigh. But I did figure out a good strategy! I’ll go to Target and get stuff like cereal, beans, honey, cheese…..and then go downstairs to Whole Foods to just get the good stuff like organic produce and specialty ingredients. Genius, no? Now that I’ve been drinking so many green monsters and juicing my veggies, I do like them to be organic because the thought of drinking pesticides really scares me! 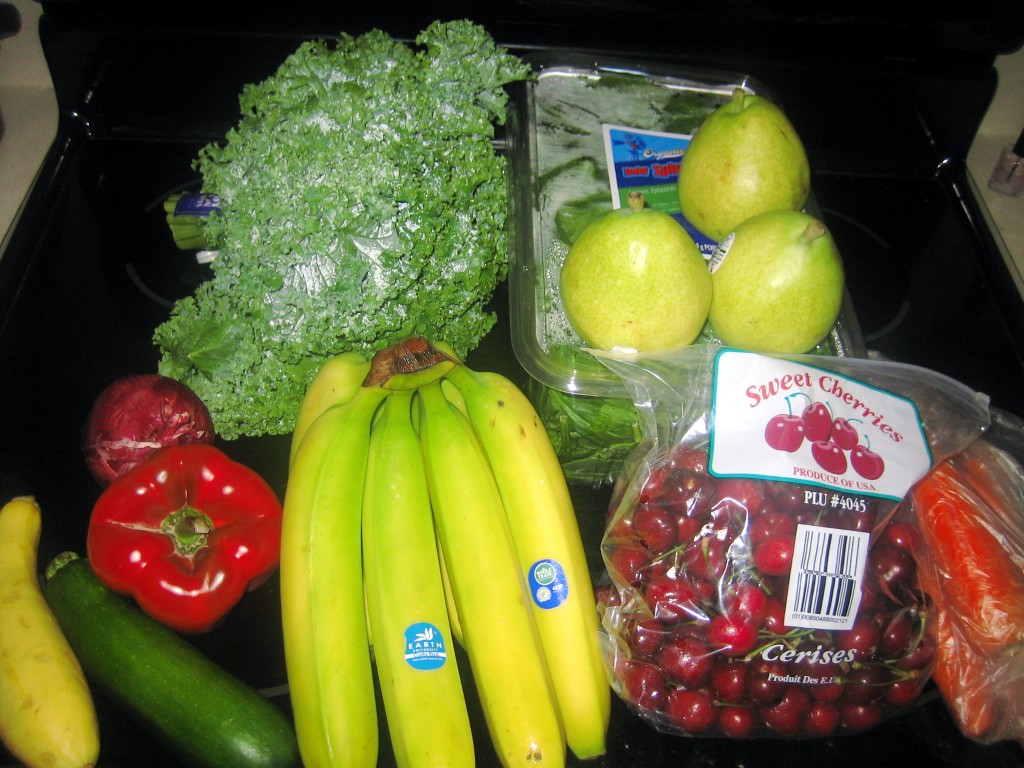 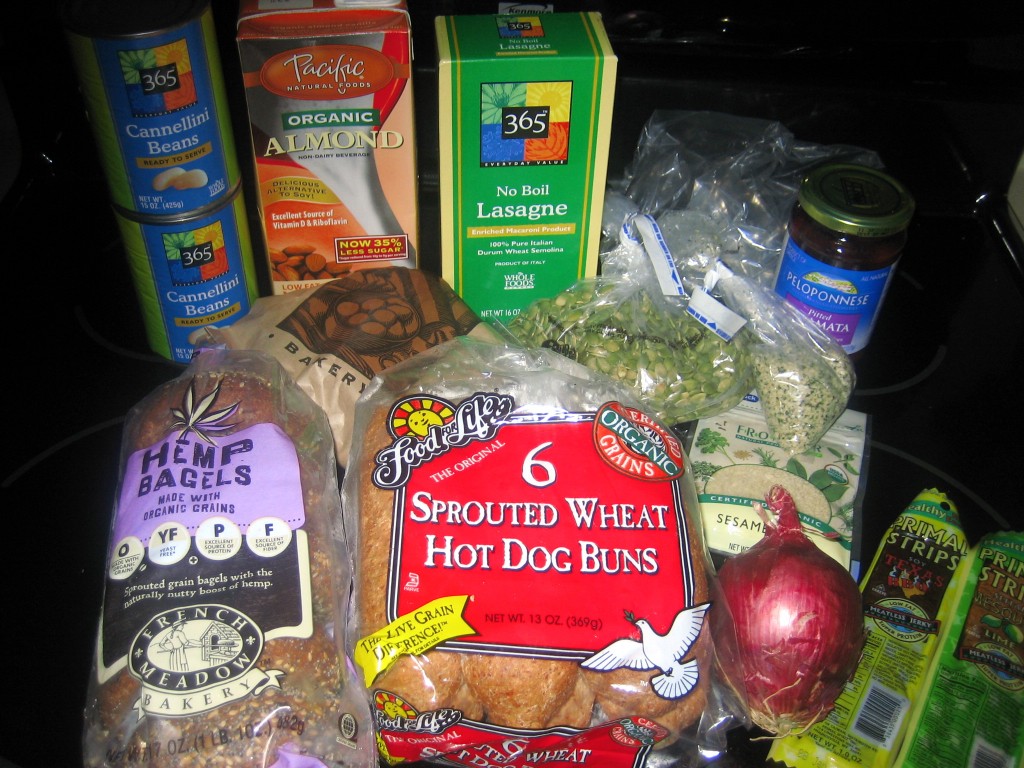 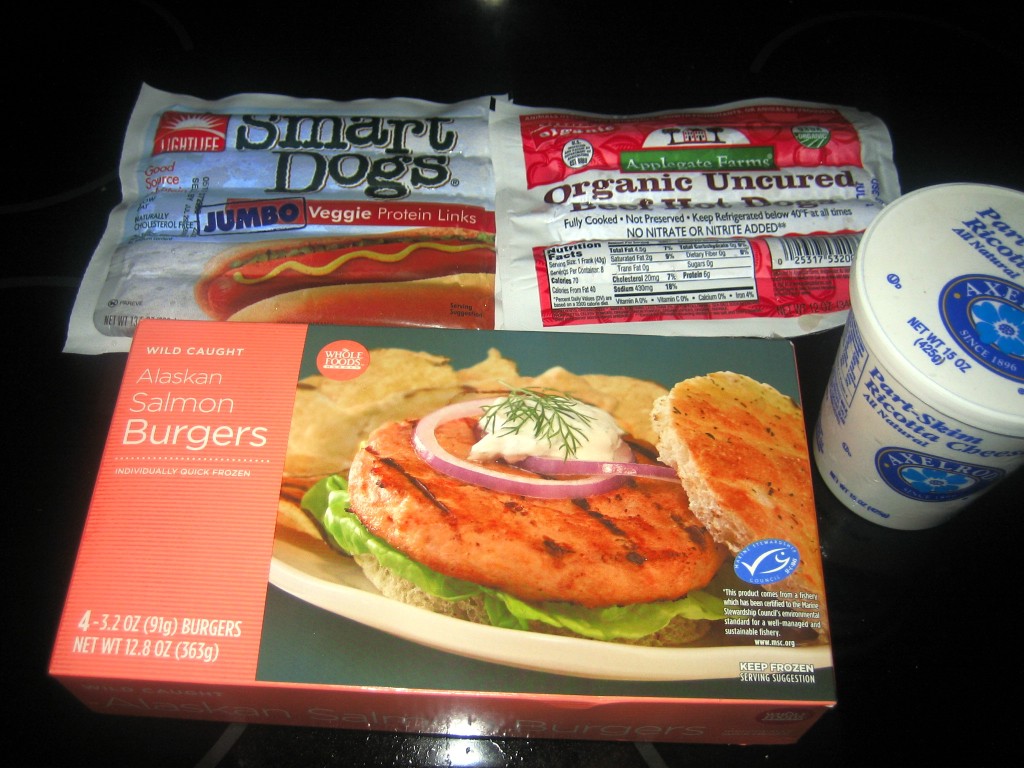 I put everything away, got the beans started and in the oven and then finally got to make what I’ve been dying to try for quite some time now: Angela’s Raw Granola Bars! 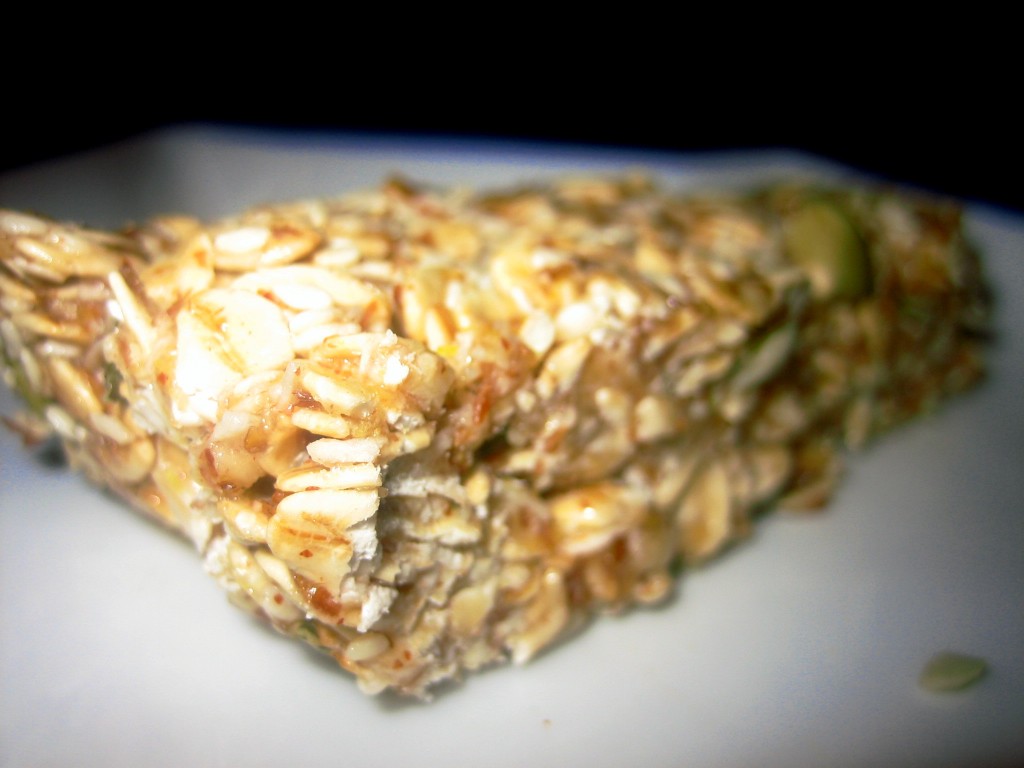 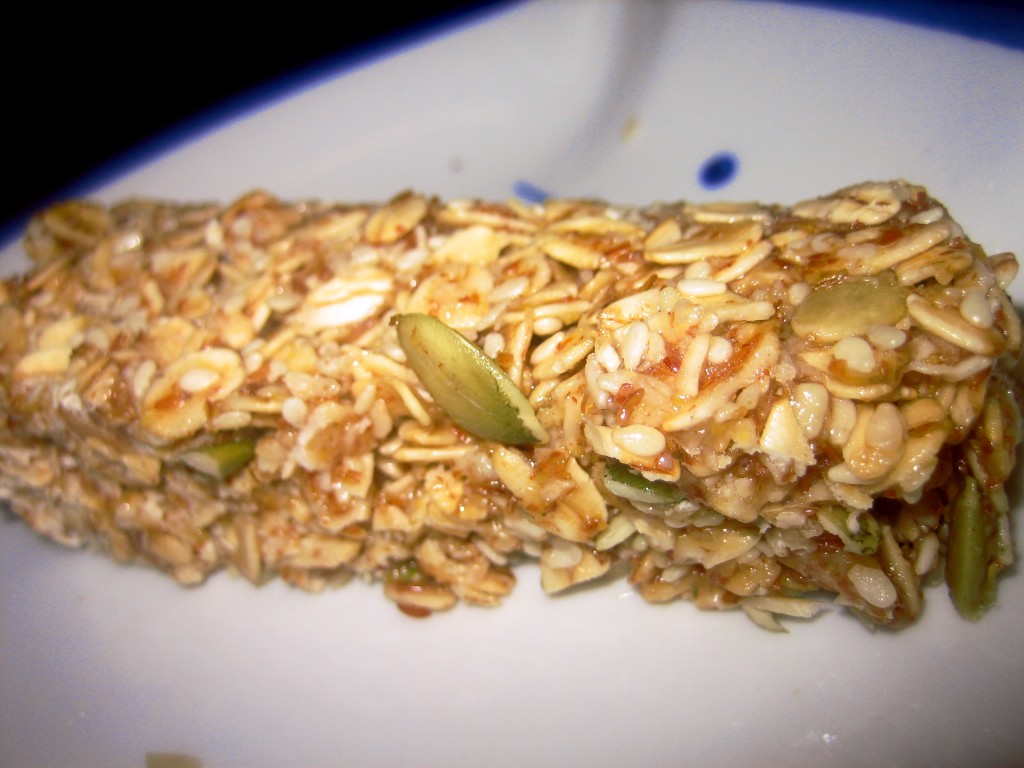 Well they aren’t exactly “raw” (rolled oats have been steamed and I heated the mixture of honey, almond butter and coconut oil on the stove prior to mixing), but Ange was right when she said “they might be the best tasting granola bars we’ve ever had!” Seriously. Its a pretty bold statement but I’m not messing around. These freakin’ rocked! They tasted so amazing and were a breeze to throw together. I honestly don’t think I’ll ever buy store-bought bars again. This recipe saved my life (and my debit card)!

They are pretty nutrient dense and each bar comes out to about 240 calories and 5 grams of protein. Perfect for an afternoon snack!

Around 5:30 I went over to my parent’s house to have a glass of wine since Ryan wasn’t due back until 7. When I got there I found a big surprise! My parents gave me my birthday present early—a new camera!!! I am THRILLED because it is a huge step up from what I’ve been using for the first year and a half of blogging and my old one was really on its last leg. My birthday is in two weeks and I guess my parents didn’t think my camera would last even that long!  😉 So all the pictures from here on out are with the new camera, a Canon SD780 is powershot. I love it!!!! Thanks mom and dad!

I got home right as Ryan was pulling in and since we both were starving we made dinner quickly! Here’s my dinner with a veggie dog, homemade baked beans and cherries! 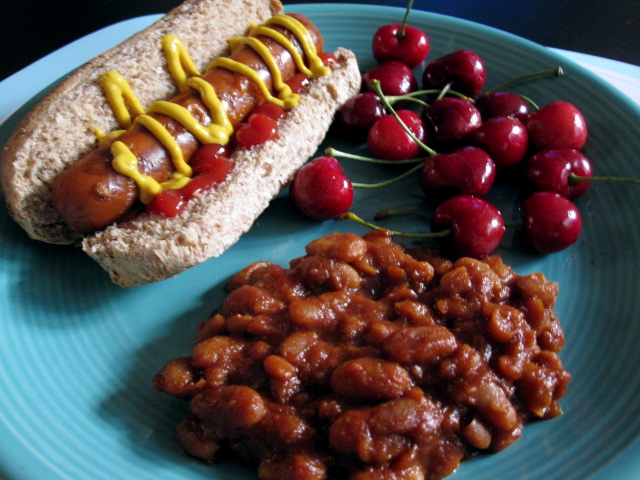 I loved these veggie dogs—good thing ’cause I have to eat the entire pack in 3-5 days so I don’t waste food! The Lightlife brand is, in my opinion, much tastier than the Tofurky brand. I really couldn’t tell that these were soy! SO yummy! 🙂 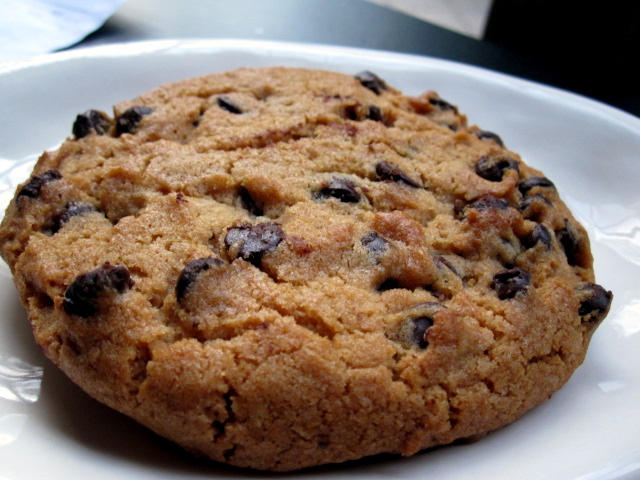 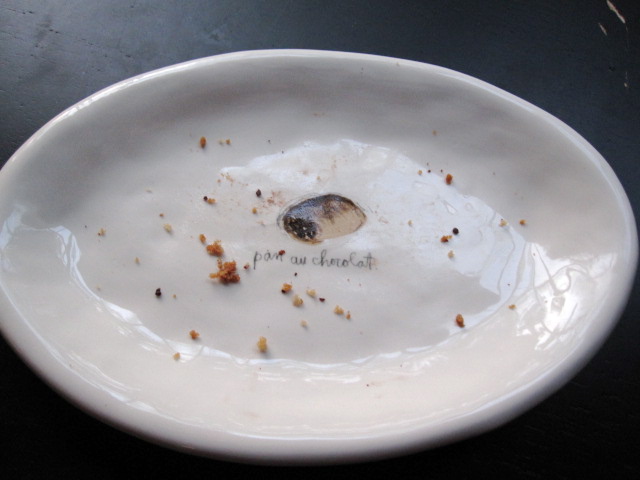 A vegan chocolate chip cookie from Whole Foods! I LOVE these but rarely buy them. They are huge and I told myself I was going to eat half and save the other half for tomorrow but don’t you know I wolfed the whole thing down faster than you could even say chocolate. A delightful splurge for sure!

Some of you have asked to see the “finished” living room. Well its not exactly finished because I’m in the process of ordering new bamboo blinds instead of those white ones and we are getting a different chair for the high top table but here it is! That comfy couch is my favorite blogging location 🙂 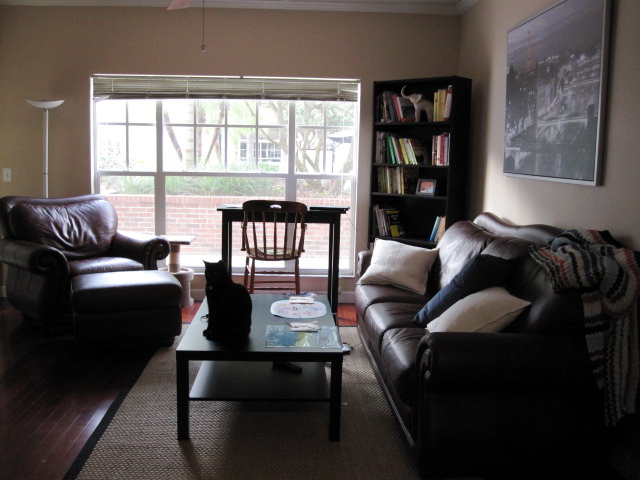 We are watching an oldie but a goodie—Dances with Wolves. I’m about to make Ryan a “treat” with his chocolate chip cookie. I heat up the cookie and then layer it with vanilla ice cream (or coconut milk ice cream in our case) and chocolate sauce. Its his favorite dessert 🙂

DessertDinnerhomemade granola barsredecoratingSnack
May 25, 2009 By jenna
49
When In Doubt, Use Cans A Better Bagel 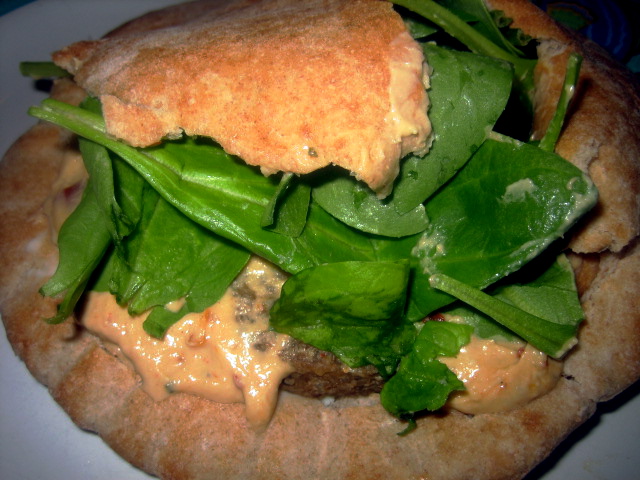 Pumped Out and Ready for Bed