Man, exhaustion hit me like a BRICK this afternoon! Fridays are always the hardest because I stay up later and therefore sometimes am awake for 20 hours! No one should stay awake for 20 hours. Criminal. And I always feel bad because Ryan will come home from work and want to hang out at “normal hours” (evening hours!) and I will just fall asleep. I guess its just the nature of the job. At least I get weekends off! I am the only one working there that gets both Saturday and Sundays off and that makes all the difference in the world because I can actually associate myself with other humans rather than just my stuffed rabbit in my bed.

Anyways! This afternoon was a JOY because I got a surprise phone call from Laura Ingalls herself, Polly!!! Her bubbly and cheerful voice totally made my afternoon and I just know that if we lived in the same city (same time zone?!) we would be best of friends. I also got to catch up with good friend, Chrissy (the one that won my oatmeal bread!), and it was so good to hear her voice rather than just read her words. What would we do without girlfriends, seriously?! 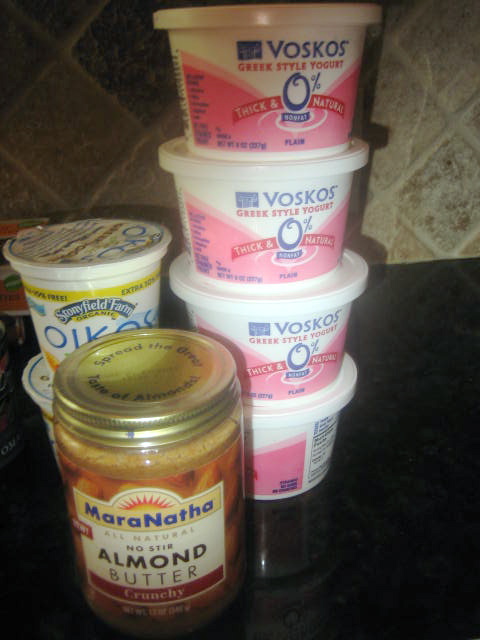 Nothing terribly exciting. I did, however, pick up this new product, which after I saw Gina and her friend Megan guzzle at lunch last weekend, I knew I must try.

These coconut waters were buy one get one free! Let’s hope I like it! Coconut water is super high in potassium and electrolytes and I think I’m going to bring a water bottle filled with it to my race tomorrow!

For a post-grocery store snack (going to the store always makes me hungry!), I had a plain oikos with a little less than a half cup of Zoe’s honey almond granola 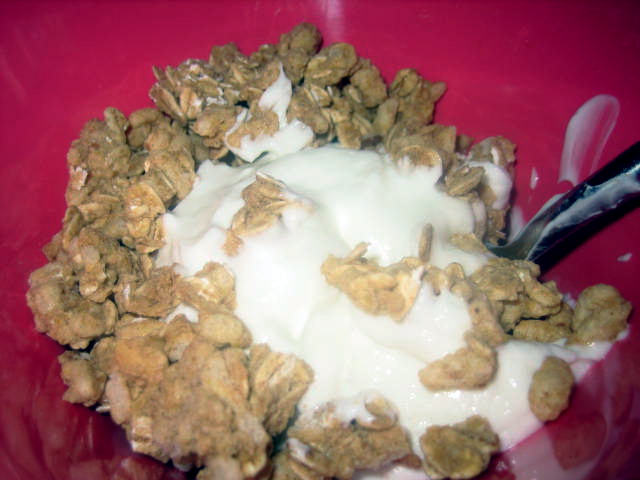 This snack was actually so filling that I wasn’t hungry for dinner! Oops! My body isn’t used to eating afternoon snacks anymore because of my schedule (I eat SUCH an early din-din!) and this felt huge to me. After I ate I tried to take a nap but failed miserably so I just took a super long hot shower. I wish I could nap…..especially on Friday afternoons 🙁

Despite not feeling hungry for dinner, I knew I needed something and that something needed to be tasty and healthy because I have my big race in the morning!! Ryan did end up working late at the office so I was on my own. I decided to take the opportunity to make a recipe from Eat, Drink and Be Vegan that I had always stared at and pondered over: Thai Chick-Un Pizza! 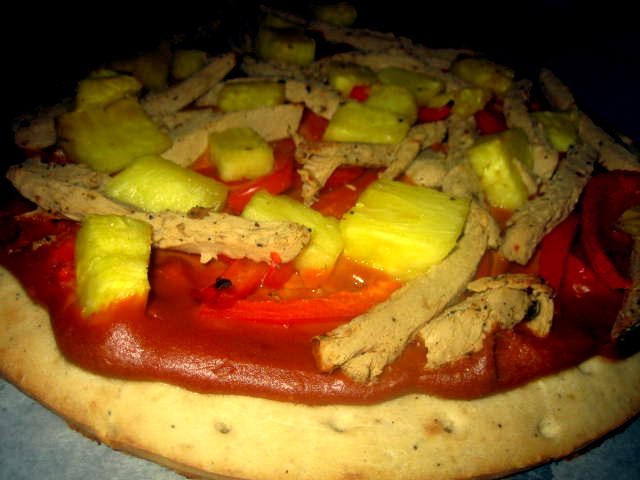 Okay. So I had my doubts.

Major doubts. I’m just not used to combining peanut butter with ketchup in the Vita-Mix, okay?! It looked awful and I actually braced myself as I taste tested it but……………..IT WAS GOOD! Not just good actually, it was freakin’ awesome! The sauce, which consisted of peanut butter, ketchup, tamari, rice vinegar, ginger, garlic, hot pepper flakes and a splash of milk, turned out to be a velvety spread of love. I liberally spread it on my pizza crust—– 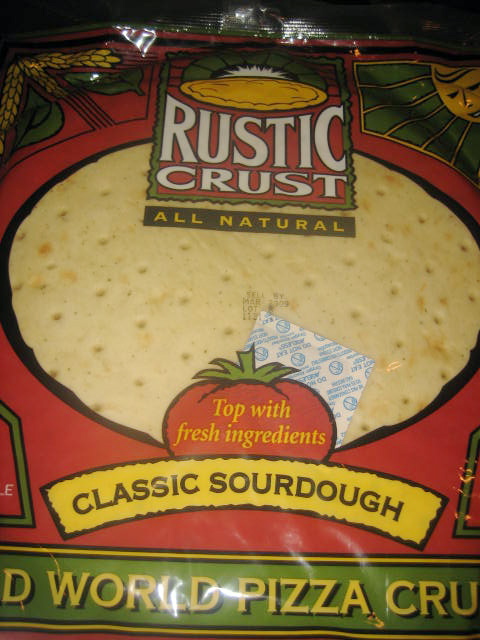 And then topped it with thinly sliced red peppers, fresh chopped pineapple and the rest of the morningstar farms “chicken” strips that I wasn’t too thrilled about last week. Turned out this pizza might be their calling in life! It rocked! 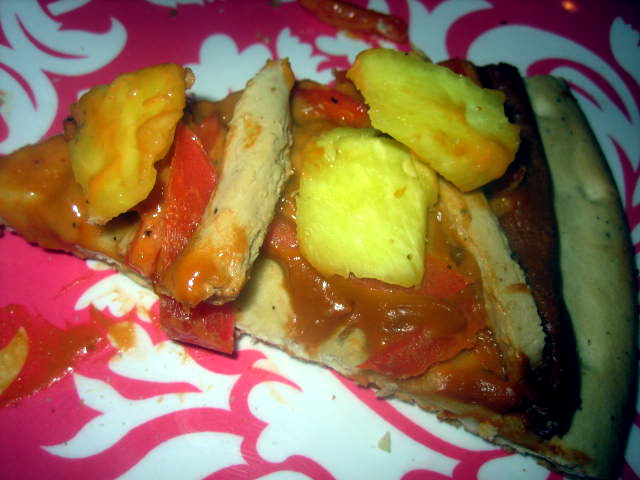 I also had a small salad made with romaine and red onion and drizzled with Annie’s balsamic vin. 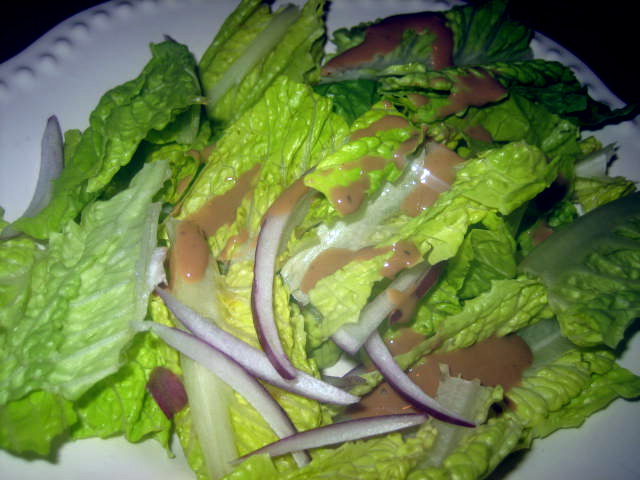 And THEN, even though I was stuffed, I still drove over and got me some d’lites! I have seriously been craving it ALL WEEK and knew if I didn’t get it now, I would probably have to wait another week. The time was right. I was there. I got a medium butterfinger with oreos!

I’m just gonna say it—I find it a litttttttle hard to believe that this HUGE BOWL only had about 150 calories…(well more like 200 probably with the oreos). It was enormous. In fact, it was TOO big and I only ate half and threw the rest away! I never do that! Especially not with good stuff like this….that just tells you just how large this tub o ice cream was. I really should have just gotten the small. Oh well. At least I ate all the oreos off the top.

I’m getting in my pjs. Sigh. Soooo tired right now. I have to be at Greenwise at 8 am to meet all the other runners (there are 12 of us store associates that are running tomorrow) and then we are all walking over to the race together. The actual race is at 9:30! I am going to give the camera to Ryan and instruct him to take tons of blog pictures, don’t worry!

And since there has been some interest in the subject………………..FYI

Sweet potatoes have a light orange or yellow flesh and are very sweet. A real African yam is often larger, less sweet, starchier, and has a more vibrant color. Yams are actually related to lilies (who would have thought?!) and certain grasses, whereas a sweet potato hails from the morning glory family and is more closely related to other potatoes. Garnet yams (the type I am addicted to) are actually sweet potatoes, not yams, and have been considered to have the sweetest taste and brightest color of all the different types. The average garnet yam has 130 calories in it, zero grams of fat and two grams of protein. Most “true yams” will not be found at the grocery store, but will rather be found in small Caribbean or Asian markets…..or in other countries! Check out this cool website I found for sweet tater lovers like myself! =)