Okay. Can I please win the award for Whole Food’s best customer?? I go in today with the intention of picking up some powdered sugar, peanut butter and green tea and leave with $70 worth of stuff. Bah! What is wrong with me?! I do feel like I got some goodies though…here’s what went down…

Whenever I’m sick I always try to stay clear of drugs, prescriptions and walgreens whenever I can. Way back when, I told you all the story about how I got really sick while living in France and was magically cured by homeopathic medicine. On top of that, I just don’t like putting stuff in my body that I can’t pronounce the names of and there’s so many weird drugs out there these days. I prefer to do everything naturally if I can. In my opinion, it’s just a better, simpler way to live without all that hooplah.

Anyways, I felt like total (insert crappy word here) this afternoon so I meandered my way into my favorite section of Whole Foods, the health section. I explained to the woman that I thought I was coming down with something, that my entire class at school is sick and that my family is sick at home. She instantly led me to the immune boosting chewables and homeopathic pills. No, I said, I CANNOT GET SICK RIGHT NOW. Give me the real business. So, she brought out the Olive Leaf Extract. Hmm what is this? She told me basically it will kill whatever funk is in my body and it’s pretty potent. Three other girls working in the department came up and told me their testimonials about it…saying it tastes completely and totally horrible (you dilute it in water) but it will cure you. She even looked it up in her herb encyclopedia and showed me all the good stuff that this extract can accomplish. 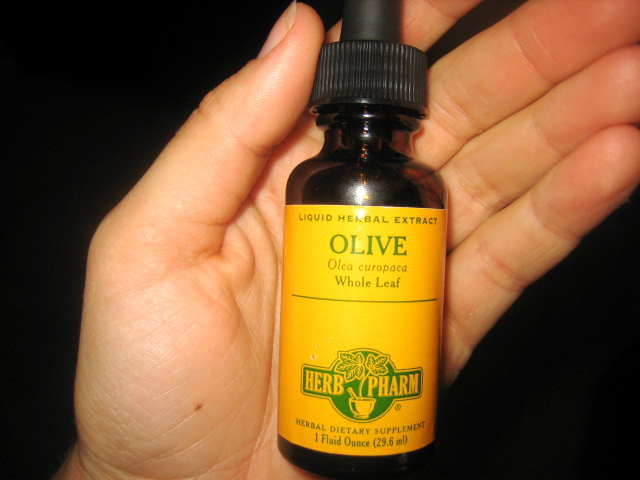 Here’s what was said about Olive Leaf Extract:

So, I said got that and then she asked me what multi I take. (blush and look down). Here’s my guilty secret you guys shouldn’t know. I DON’T TAKE A VITAMIN. I have many many times but I always run out then never buy more. I think it’s been about 6 months since I’ve taken one?! I know I should take one but it’s just an added expense so I never do. Anyways, she guided me to the one she takes and swears by and after reading about it, it sounded pretty damn good, so I got that too.

Here’s what is so different about this multi vitamin. It contains two servings of organic fruits and veggies!! It’s made of REAL food, so its more easily absorbed in the body. Here’s some of the stuff it contains: pumpkin, kale, spirulina, tart cherries, collard greens, cranberry, strawberries, spinach, acai, adzuki beans, raspberries, chlorella, red lentils, daikon radish sprouts, blueberries, blackberries, broccoli, cabbage sprouts, mustard sprouts, ginger, quinoa and watercress. If that’s not health in a pill, tell me what is?! I already took four of these bad boys today along with 2 servings of olive leaf extract (in peach tea so it wouldn’t taste as bad), so I better feel pretty amazing tomorrow. 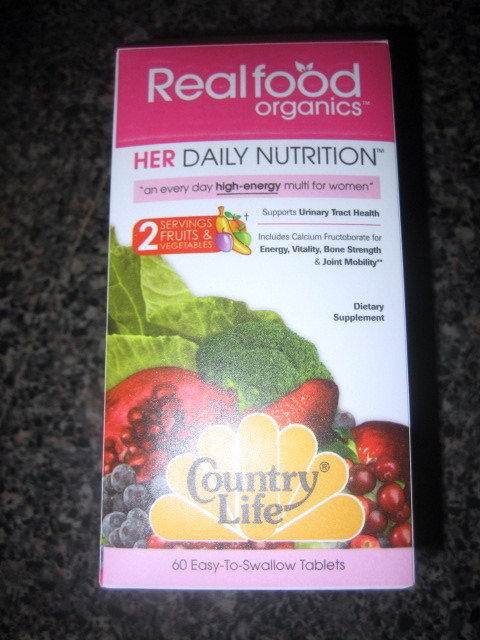 Back to the food-front—-I actually didn’t have an afternoon snack today. When I feel crappy my body gets all out of whack and I either crave very odd things or nothing at all. I ate a late lunch (around 1:30) and spent a good chunk of my afternoon talking to the Whole Foods people, so I didn’t get around to snacking. I DID get around to doing some yoga, however! I did a 60 minute detox class from yoga downloads . When I was done, it was about 5:00 so I just made a super early dinner instead of having a snack.

I had one of my all time favorites: simple seared salmon. I just seared the salmon in half a tbsp of evoo and sprinkled it with salt and pepper. That’s all this bad boy needed! I served it atop a bed of fluffy whole wheat couscous and had a bowl of sugar snap peas and cherry tomatoes to go along side it. I need all the vitamins I can get! 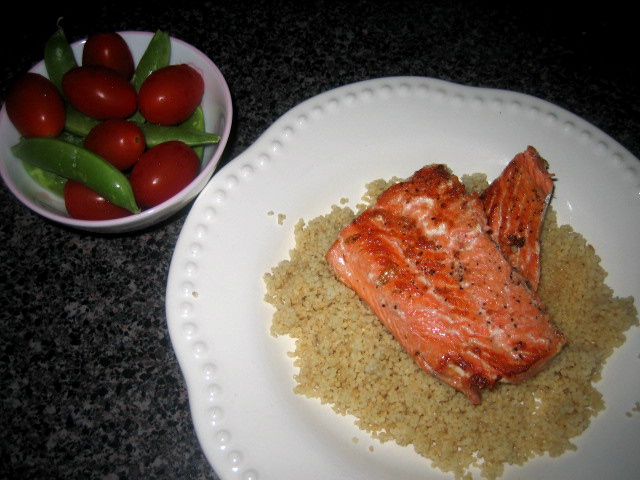 Dexter got some salmon too because tomorrow is his 1st birthday!!!!! 🙂 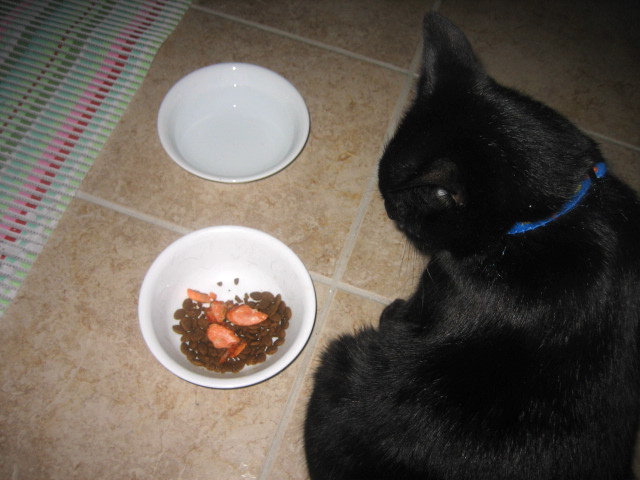 I also had a small glass of wine because, like I said at lunch, wine makes everything better.

And for dessert…………………Caitlin and Meghann, here’s a teaser for tomorrow! 😉 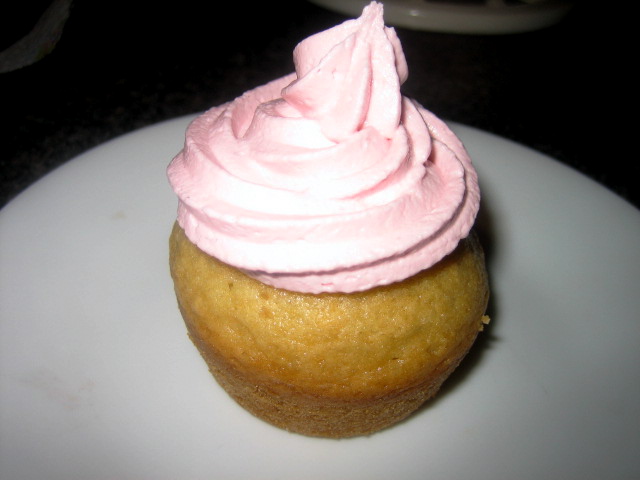 Vegan vanilla cupcakes with fluffy buttercream frosting!!!! The recipe for the cupcakes is from Dreena Burton’s cookbook, Eat, Drink and Be Vegan (each cupcake only has 126 calories in it! Practically a health food!), and the frosting can be found here. And, yes, I just had to taste-test one for dessert to see if it was okay to serve tomorrow. I guess it’s alright 😉 YUM!!!!!!

Okay I’m going to bed suuuuuper early tonight—I have to be up at 5:45 to get downtown for my MRI. Wish me luck!

September 16, 2008 By jenna
19
Wine Makes it Better Dexter's Birthday and a Tea Story 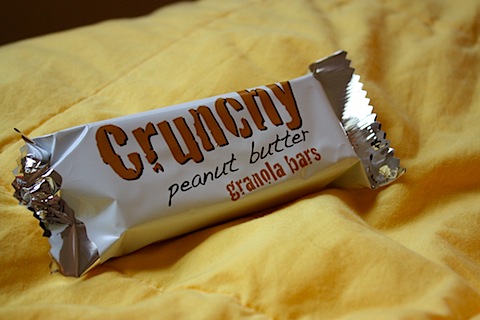 The First and The Last 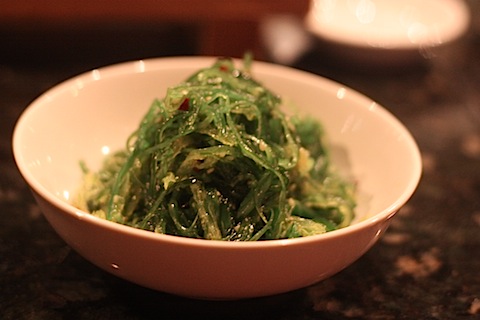