Happy to report I had a much better day than yesterday. I feel a ton better and much less spacey! I actually woke up wide awake this morning at 4:40 and I’m not sure if I fell back to sleep. Does this ever happen to anyone??! I might have dozed but I feel like I just tossed and turned for the next hour til the alarm went off. Regardless, I have had tons of energy all days so I must have done something right!

I also woke up CRAVING this breakfast! Sadly, I am now out of plain greek yogurt so I can’t have this super duper breakie again til next week. I packed the usual turkey and provolone sammie on fiber bread for lunch today but was super excited when I found out Adam was making these huge salads for staff lunch! So, I had a salad to go with my sandwich for a change! The salad included cucumbers, red onion, kalamata olives, greens, blue cheese crumbles and tomatoes. I didn’t put any dressing on mine because it needed none! Was delish as is 🙂

Here are my daily snackies: I ate the yogurt midmorning and had the apple with my salad and sandwich at lunch. I didn’t end up eating the rice bar or the almonds today.

Since today is a running day and we were having a later than usual dinner, I knew I needed a filling snack after work for fuel. I made yet another yogurt bowl with about 3/4th cup plain nonfat yogurt (not greek), 1/2 cup H2H, a spoonful of peanut butter and a smidge of jam. 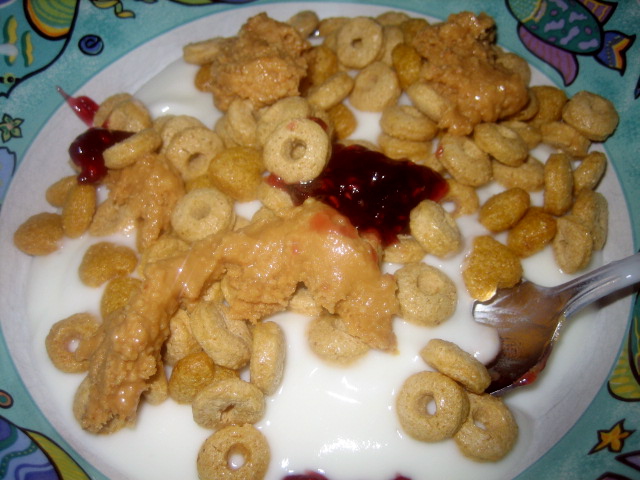 I’ve been eating a ton of yogurt lately and I LOVE IT! I’m definitely getting all the protein and calcium I need and I’ve read that yogurt is especially great for runners. I think I could seriously fill up my entire shopping cart at Publix with just yogurt and be fine. I’m weird.

Today was a running day (if you haven’t noticed—Tuesdays, Thursdays and Sundays are “running days” around here) and usually during the week I run 40 minutes (about 4 miles) and do a long run on Sunday…gradually increasing my distance each week. Today, however, I was feeling so great that when I reached the halfway point where I usually turn around, I kept on going to smoke another 5 miles!! =) I ran down the “main strip” by the beach, down the boardwalk ON the beach, through the park and down the road and then back again. My favorite part, obviously being running on the boardwalk. The breeze is amazing and it’s just so cool to run so close to the ocean. The water was rough today!

When I got back, it was 5:45 and dinner wasn’t until 7:00, so I immediately dove into some grapes for some carbs while I iced my leg. I had about two times this amount—-I ate them all so fast before I could grab my camera! 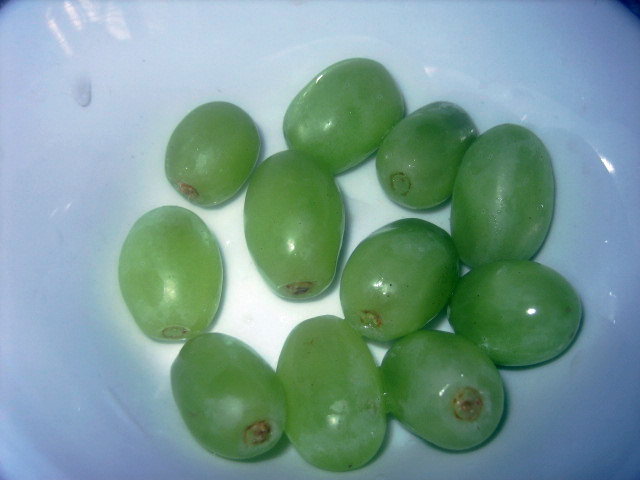 Tonight we had a guest over for dinner and Betty cooked another fab meal….actually I think it’s my favorite thing she makes—–her mediterranean salmon. We also had a fabulous baked rice dish, homemade cornbread (!) and layered salad. I also had a glass of red wine with dinner. Since we ate later and I obviously go to bed early these days, I didn’t need dessert. The wine was my dessert I suppose! The salmon is really easy—-all she does is takes a huge salmon fillet and rubs store-bought pesto on it followed by fresh herbs, kalamata olives, sun-dried tomatoes and a sprinkle of feta cheese. Baked at 350 for about 20 minutes and it’s always perfect.

Today at work went A LOT BETTER than yesterday. You know sometimes when something doesn’t feel right? That was yesterday. Today, I was on a roll. Adam didn’t get in til 9:00, and by the time he had gotten in, I had already baked seven chocolate cakes: 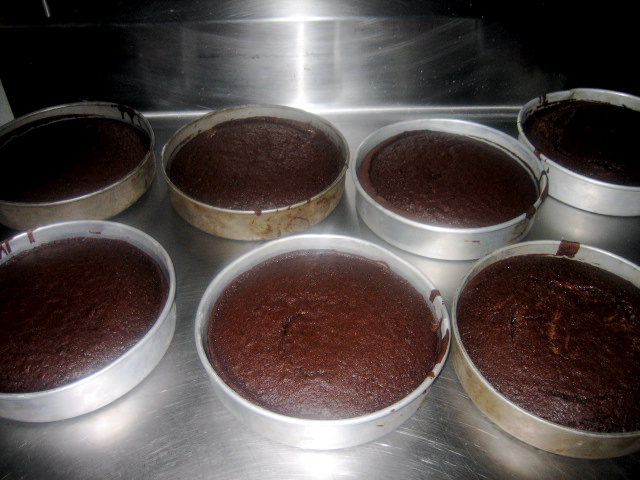 And baked a HUGE sheet tray full of cheesecake (to be cut up into little “cheesecake bites” for a function in a few days): 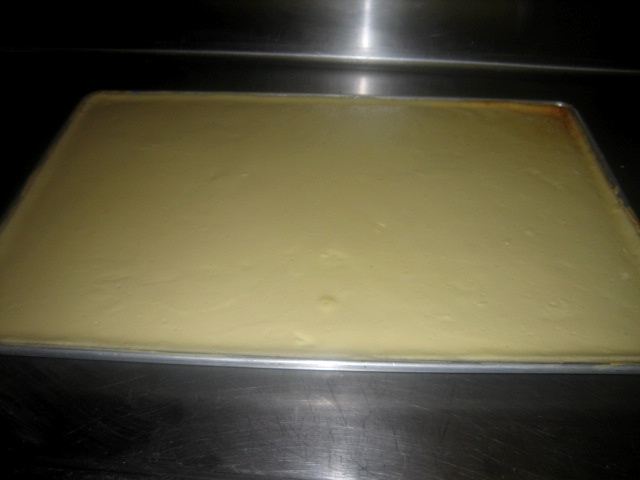 I also made some pate a choux (the stuff that eclairs are made out of) and creme anglais. Since we have a big dinner going on tonight, I baked four more loaves of the tasty pumpkin bread: Here’s one of the desserts for tonight that Adam put together: It’s a chocolate Bavarian with chocolate hazelnut cream on top and topped with some sort of chocolate macadamia nut crunch. On the side is pistachio shortbread that I baked this afternoon. Looks pretty, huh?!

I also seeded five pomegranates!  This DEF. made me have a craving! I think they officially come into season next month and I can’t wait! I spent the last hour icing these mini flourless chocolate cakes. They were really starting on my last nerve though. We were using them for tonight to finish off a plated dessert with a martini glass full of white chocolate sorbet. Honestly, I really don’t like decorating cakes at all. I get SO frustrated because its so hard to make everything perfect. I think Adam knew that and he made me ice all 12 of these mini cakes so I could “get better at it”. At cake 10 I stopped talking to him. Haha. The icing actually didn’t have to be perfect for these because later, they were going to be topped with a chocolate glaze. Oh! And I also wanted to show yall the flour that Adam orders because I think it’s pretty cool: That’s right—-100% organic flour! Adam says it makes all the difference in the world in baked good and is worth paying a little more for. I just like the dinosaur on the bag I think.

Whew! What a day! I’m off to finish the last couple pages in my book and call it a night. Tomorrow is Adam’s day off so I rule the kitchen once again….haha yeah right.

Have a wonderful night! 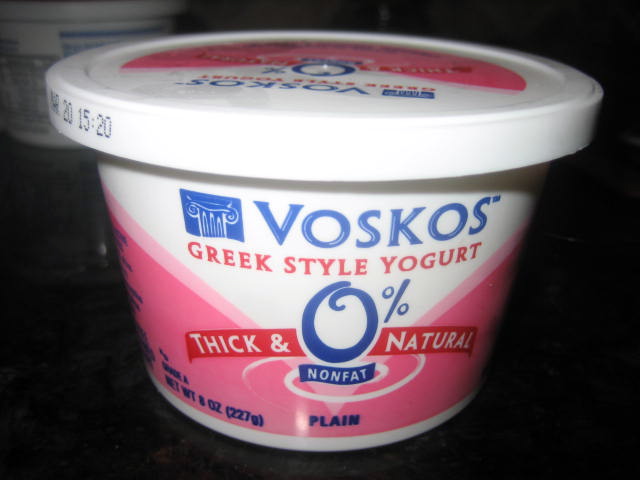