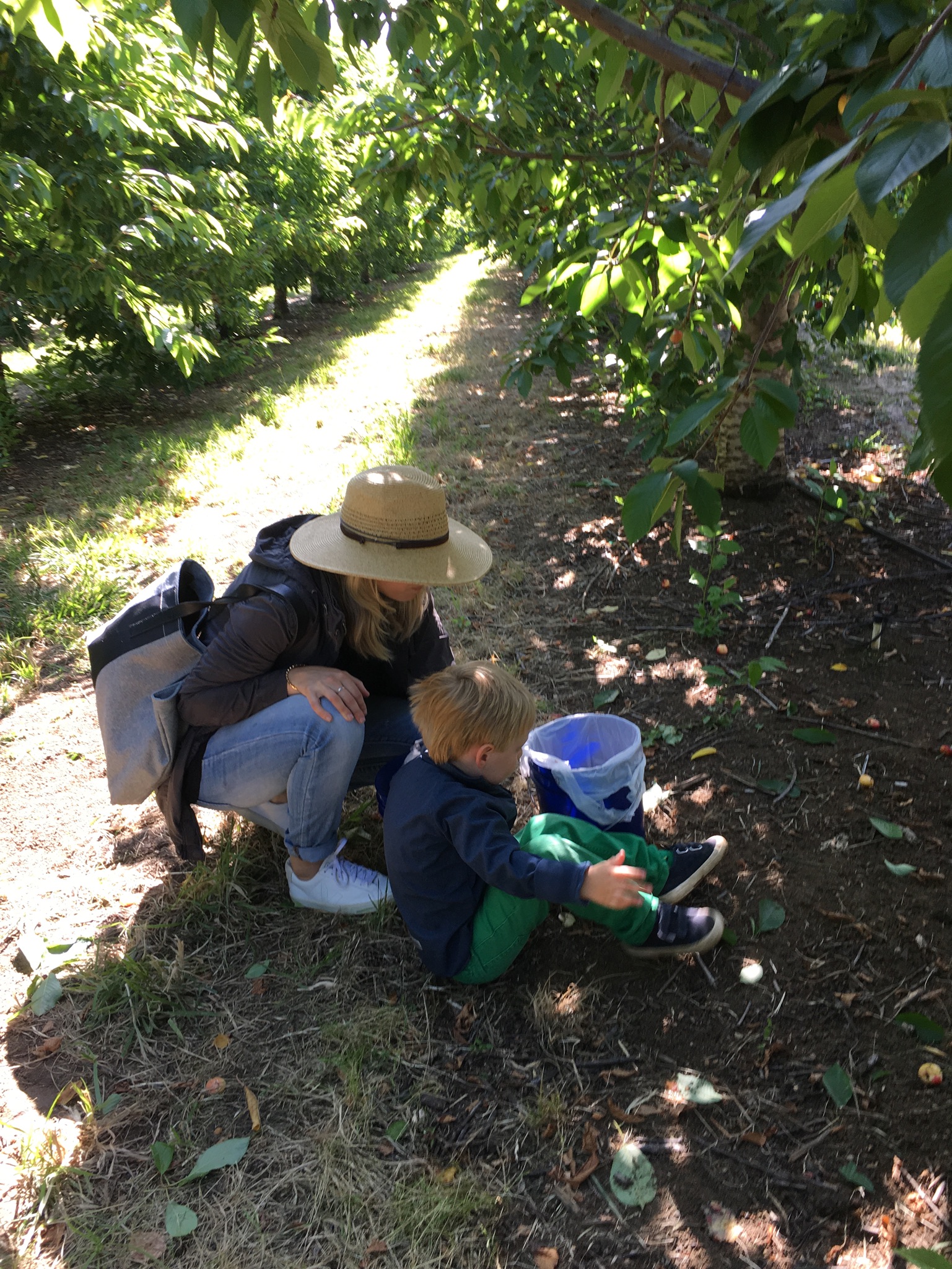 Last Saturday, I somehow got everyone into the car at 7:30am to the city of Brentwood, about an hour away, to do some fruit picking!

We had originally just planned on cherry picking but then ended up picking seven pounds of white peaches, too! You guys, we had a BLAST. Honestly, it was the best Saturday with my crew that I can even remember. My kids are seriously into both picking fruit and eating fruit (hah) and hearing them both squeal with delight in the cherry orchard made the hour car trip more than worth it. I was a little worried that we would need a ladder and that the kids wouldn’t be able to actively participate in the picking process (or that they would swallow a bunch of cherry pits) but that wasn’t the case. There was so much low hanging fruit that the boys totally filled their buckets…Adam and I didn’t even pick at all! 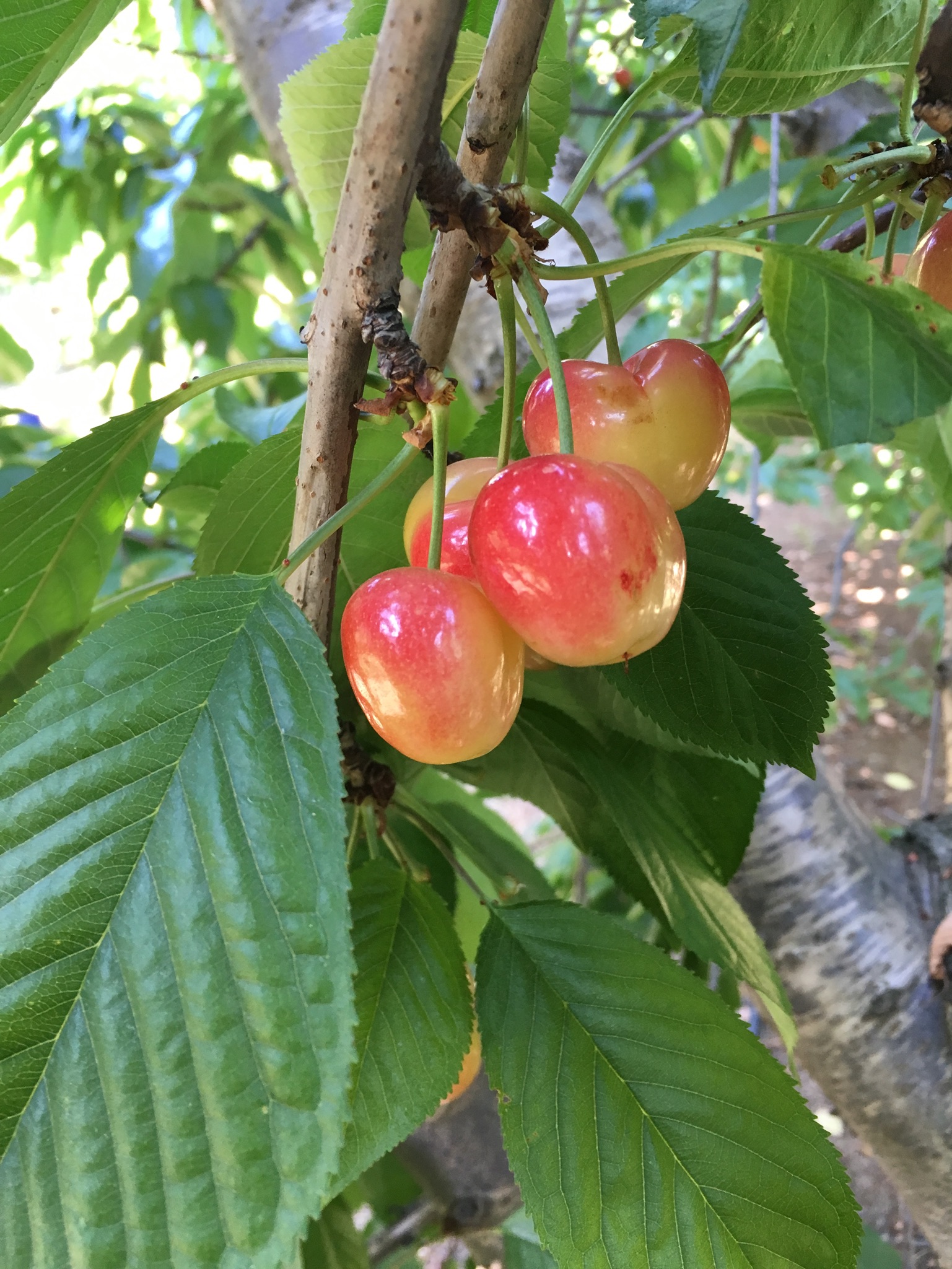 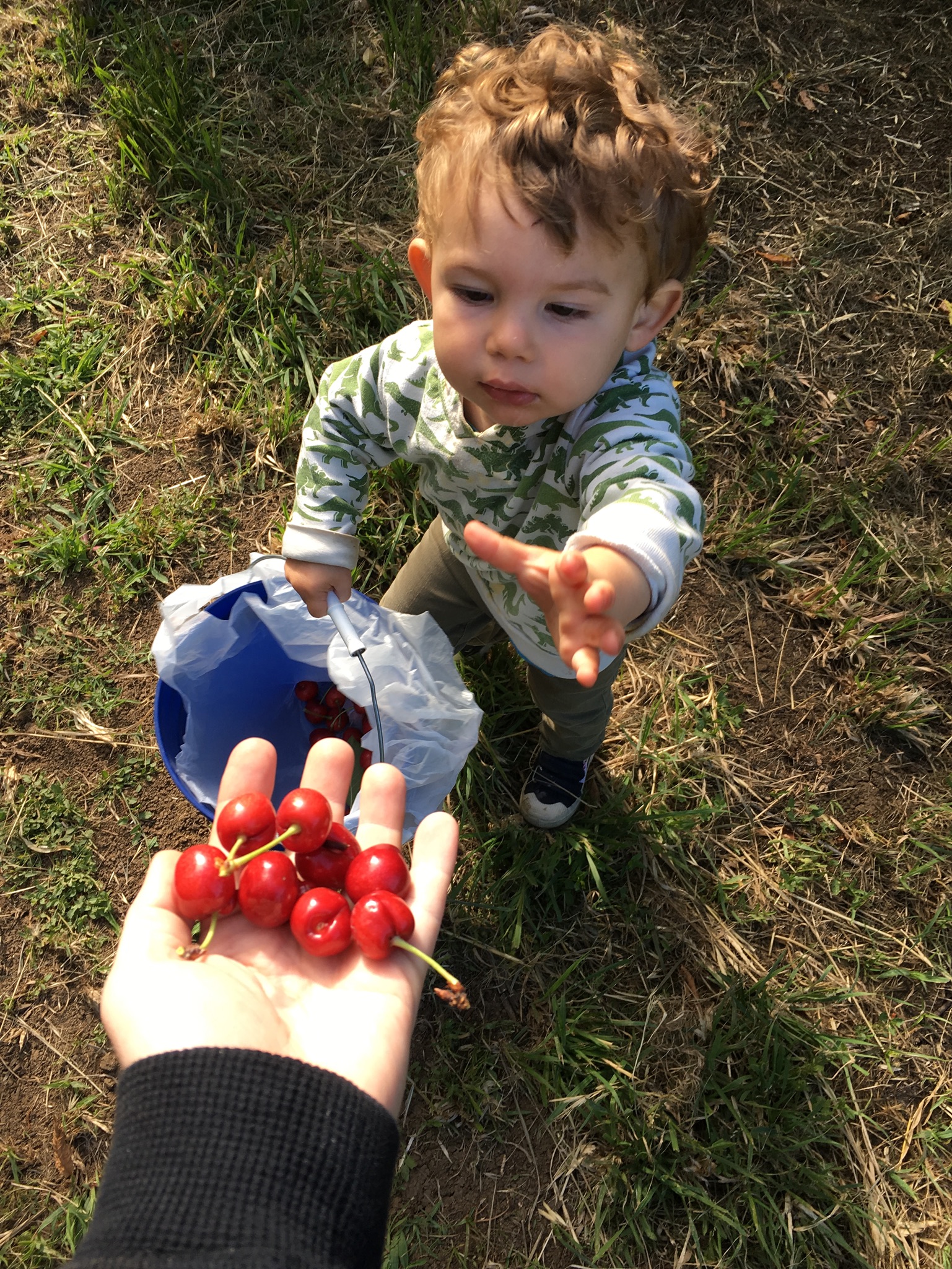 Since there were so many questions on Instagram, I’ll share where exactly we went. After reading a bunch of reviews online, I settled on 5 Star Cherries for our cherry picking experience. Apparently cherry picking in Brentwood is a HUGE deal the month of May and I truly had no idea what we were in for. If you go, know one thing: GO EARLY. I don’t think I would have even gone had we not planned to be there right at 8:30 when the orchard opened. We didn’t deal with any lines at all, but when we left the orchard at 9:30 there was a huge line of cars and a really long wait to get buckets. It turned into a mad house! However, at 8:30, we were amongst the first people in and it didn’t feel crowded at all. Also, it gets extremely hot over there so I’m glad we planned our trip first thing in the morning. They had “kiddie buckets” for the kids and Grayson and Luke absolutely loved being in charge of their own bucket and each getting to pick to their heart’s delight. U-pick cherries were $3.50 / pound, which beats our farmers market by far so I felt like we were getting a major deal. 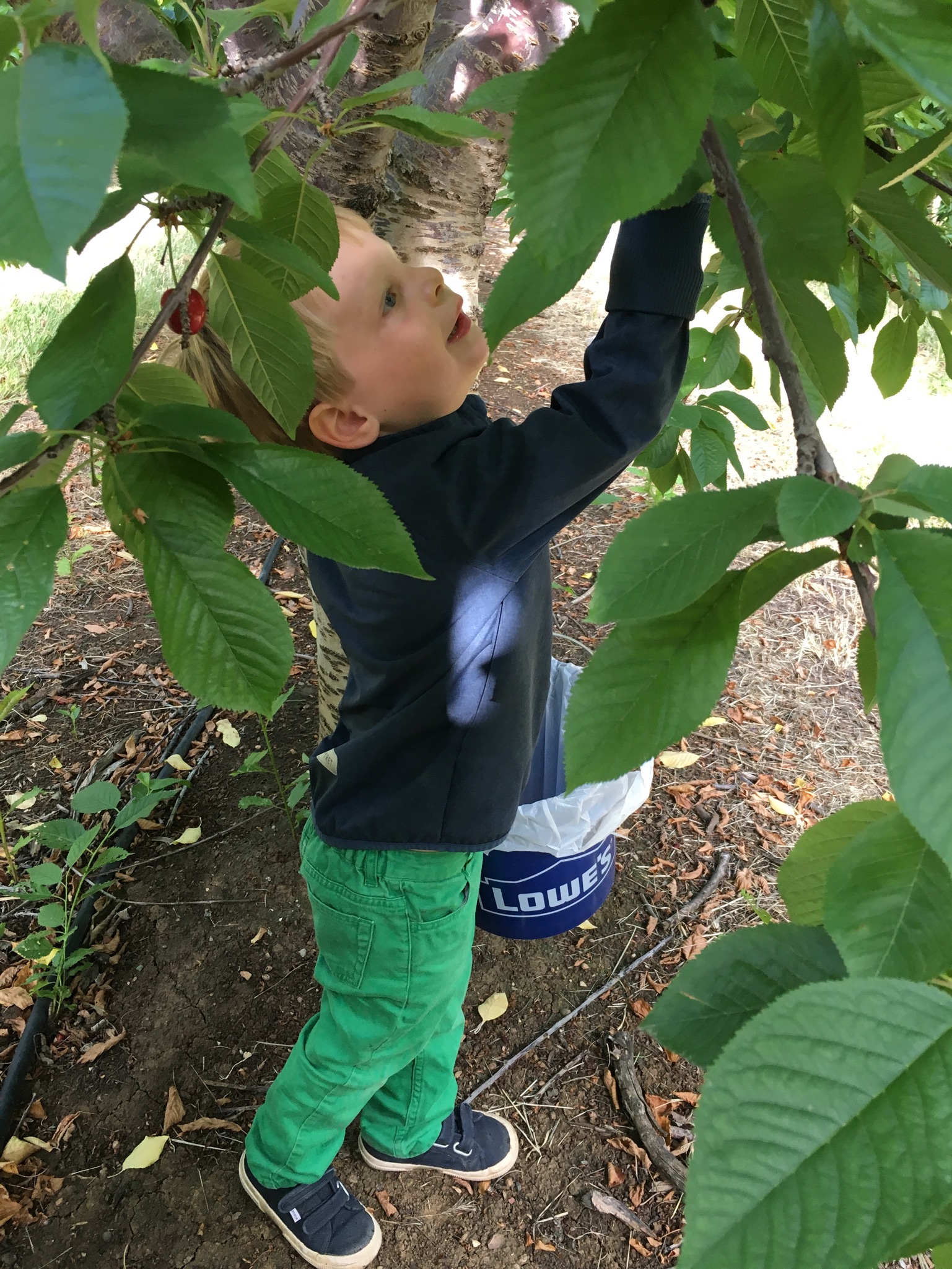 I really wanted to pick apricots to turn into my favorite preserves but it still was a little early in the season for that, so we settled on heading down the street to McKinney Farm to pick white peaches. We were the only ones there and there was a ton of ripe fruit on the trees. I much prefer the taste of yellow peaches, but my kids don’t discriminate. 😉 We brought back seven pounds and they only lasted three days in our house! I turned a couple pounds of them into agua fresca and we all just ate the rest out of hand. 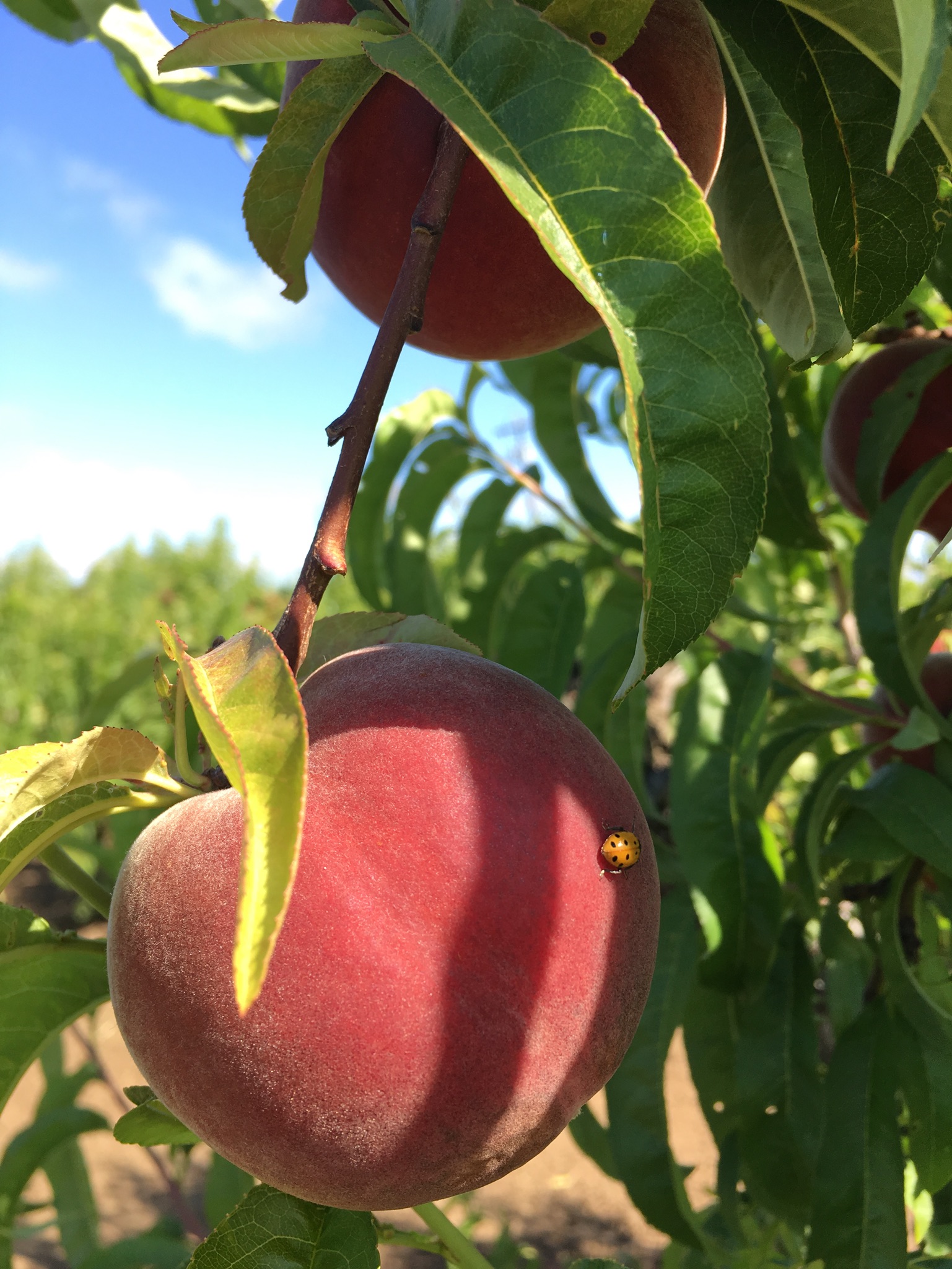 We stopped on our way out at Chan’s Fruit Stand and I wish I would have spent more time and money there. We picked up a basket of the most incredibly sweet strawberries, and had I known how amazing they were, I would have bought a flat. I’m already planning a trip back so we can take the boys strawberry picking. 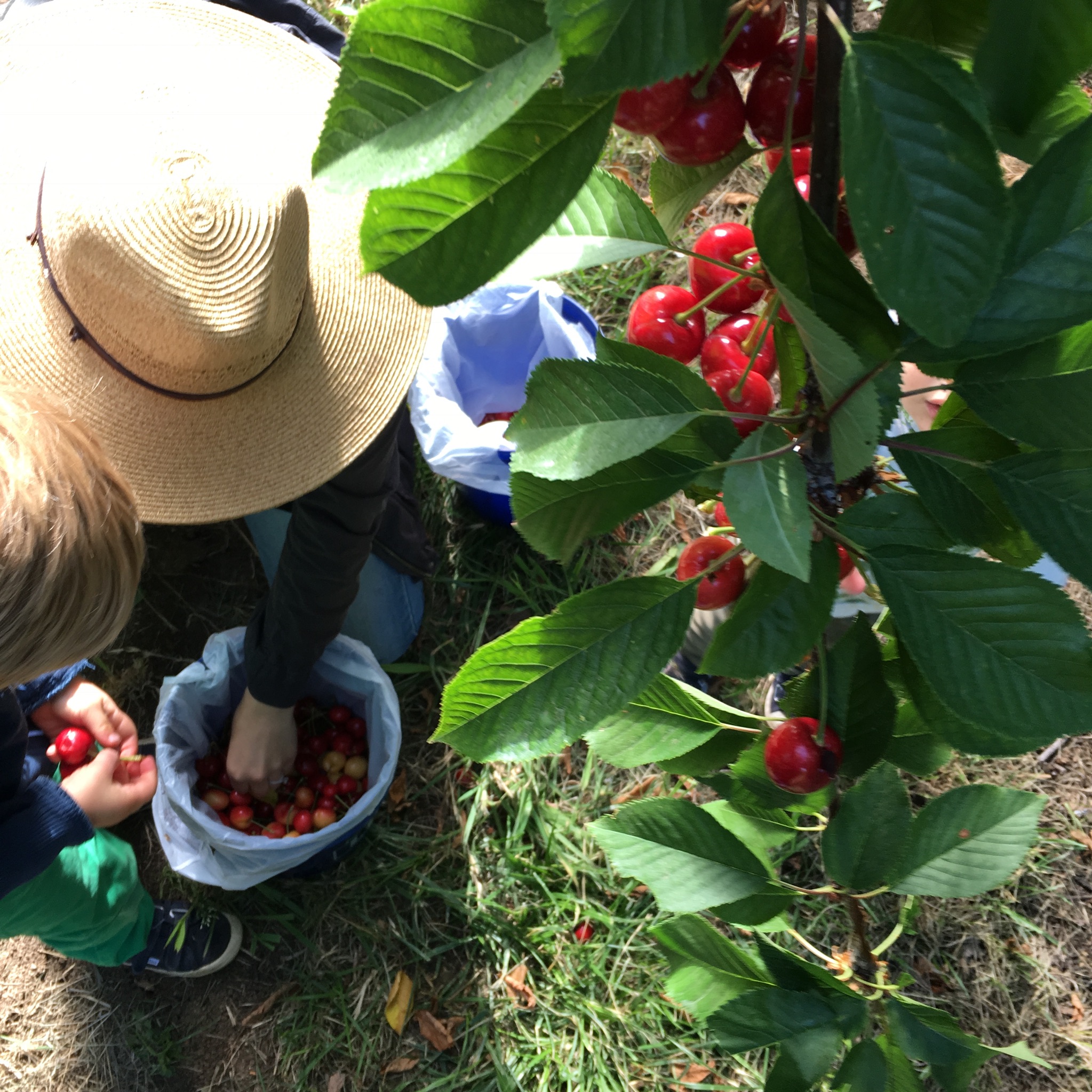 So, to recap: my best tips for fruit picking is to go early and get there right when the farms/ orchards open, wear layers and closed toe shoes, bring an ice chest (we didn’t but I wish we had!), bring cash because most farms are cash only, pack plenty of water, sunscreen and hats for everyone. We had such a fun day and I know at least Grayson won’t forget the memories we made! 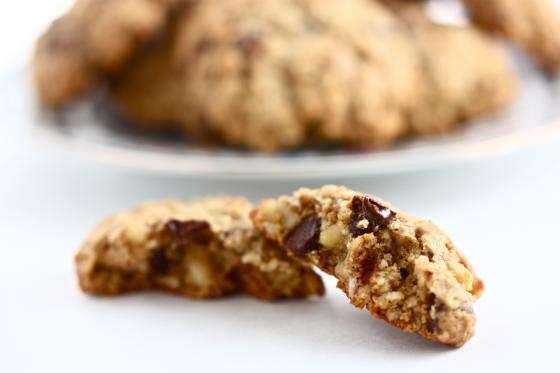 A Girl Has Gotta Have Her Snacks!