We had a blast last night!! 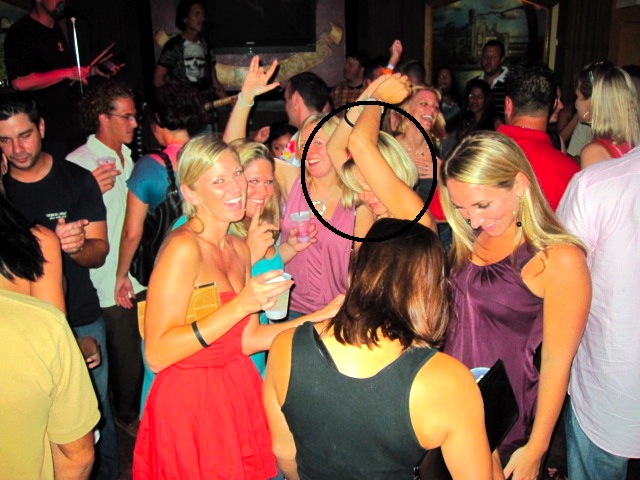 I think I’m one of the few people that can totally get down on the dance floor sober. I mean, I did have two drinks at the beginning of the evening but after that I just chugged my water and was good to go. I honestly think I’m incapable of having more than two cocktails. Its like the third drink just always makes me feel sick and, well, if you can groove without it…why not?!

So, we went to The Lodge last night for dinner. CRAZY place, y’all! Anne and I ordered (upon my recommendation!) sweet tea vodkas— If you haven’t tried firefly, you should. Its just so interesting! I think you could make a really good drink with firefly vodka and lemonade…sort of like an Arnold Palmer? Being from the South, I do love my sweet tea…in any way, shape or form! The actual menu was craaaaaaazy!!!!!! They had crazy things like “american sushi” (sushi made with hamburger meat, bacon and cheese sauce), mini corn dogs and make-your-own tv dinners. You will have to look at the menu to get an idea! Since I was with a bunch of people, we ordered an appetizer plate to start it off. Errr this wasn’t my favorite thing. Everything was fried for the most part (like most appetizer plates are) and I just picked at a few of the calamari and had a mini corn dog 😉

Now my dinner, on the other hand, was awesome! I was intrigued by the “slider” idea so I ordered the grilled tuna sliders with asian coleslaw and sriracha aioli. The two mini sliders came with three sides so I got (naturally) sweet potato fries, sweet and spicy cucumber salad and….randomly….baked beans! The sliders were good but not awesome (I ate one of the two), but the sides were out of this world.…especially the cucumber salad and sweet potato fries!!!!!!! The sweet potato fries had honey drizzled on them and were dusted with powdered sugar…..seriously now!

Anne’s fingers get in the way of my food: We stayed at The Lodge for a little while longer after dinner and then decided it was time to walk across the street and dance it up! So, we requested Journey but the band said they didn’t know how to play Journey. Who doesn’t know how to play Journey??!!! Is that even a concept? Next we tried Bon Jovi (it was an old school kind of night) and no bananas there either. Finally, Anne yells “JESSIE’S GIRL!!!!” and finally we had gotten a winner.  My friend Kathleen from high school showed up and we danced the night away (and I chugged water!). We ended up getting home around 1 am and even though I woke up digustingly early (why is it when you stay out late you still sometimes wake up at the crack of dawn?!), I feel good today because I didn’t over-do it in the cocktails arena. I just have to much fun bopping around on the dance floor, I don’t even need the alcohol half the time! hehehe

**On a much sadder note…my heart goes out to Meghann this morning, whose beloved dog, Abbie, passed away last night. I know the feeling of loss very well and the news brought me to tears. It seems like just yesterday Abbie was chasing Mikan around the house and I know with 100% certainty that she is in doggie heaven right now! I love you, Meghann!