Tonight something miraculous occurred. I turned down dinner with the boyfriend at my very favorite restaurant and instead opted to cook.

Eating out and cooking pull at the strings of my heart because I love them both so much. There’s really nothing better than a wonderful dining experience at a fabulous restaurant, usually involving cheese, wine and good seedy bread. I like to tell people that I’m a professional eater. I love the whole experience of dining out, from the folded napkins to the mints at the end. This is probably why I felt so at home in France, when eating is the day’s main activity. I would love nothing more than to go out for a two hour breakfast, move onward to a three hour lunch and then end the day at a fabulous restaurant. Exercise would be in the form of moving from one restaurant to the other. I don’t really see a problem here.

Exhibit one (know this girl?): 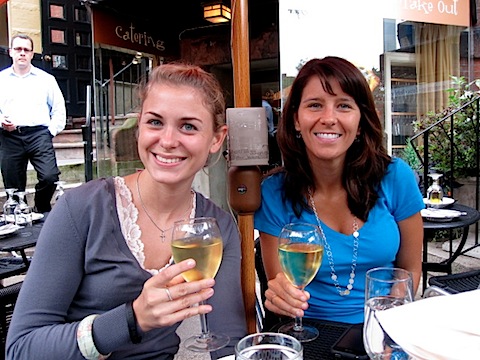 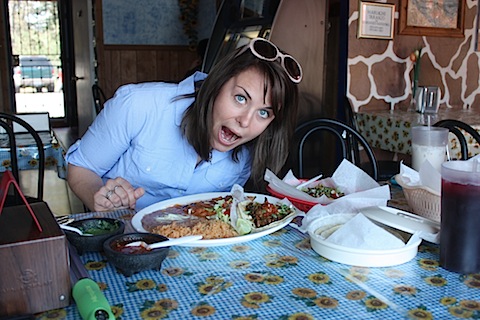 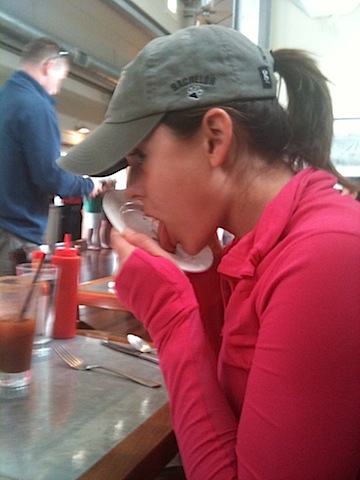 For some reason I don’t go out to eat as much as I used to. I have no idea why.
I won a bet with the boyfriend (another post for another time) and therefore was awarded Zazu tonight. However, I had something else on my mind. Something where only a certain red cast iron skillet would be worthy…. 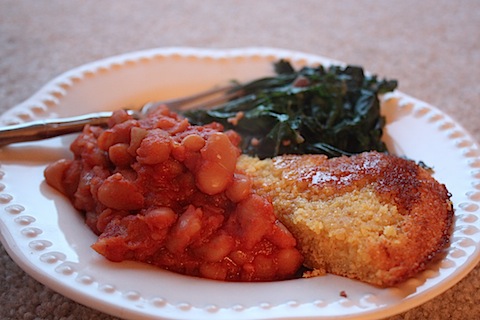 I bring you beans, greens and cornbread, people. A magnificent trilogy perfected by the South and loved for generations. The Big Three, if you will. Now don’t get me wrong, I love me some pulled pork but I also just love the simplicity of homemade baked beans and cornbread made by scratch, in a cast iron. Obviously. Because I’m a caring girlfriend, the idea popped into my head about dinner tonight while strolling through the aisles of Trader Joe’s today. I reached for some tofu and then, out of the corner of my eye, saw some pre-made barbecue pulled pork and thought wow I might just win girlfriend of the YEAR if I give ______ this tonight. Who turns down dinner at their favorite restaurant to feed their man pulled pork? Brilliant. 548,921,000 dinners out to come. Sometimes you just have to think out of the box.

Girls, its simple really. Our mothers were correct: the key to a guy’s heart IS through his stomach. Why do you think I took out 40K in student loans to go to culinary school? I kid. I kid. But seriously, guys like food. Sometimes you just gotta bring home the bacon. 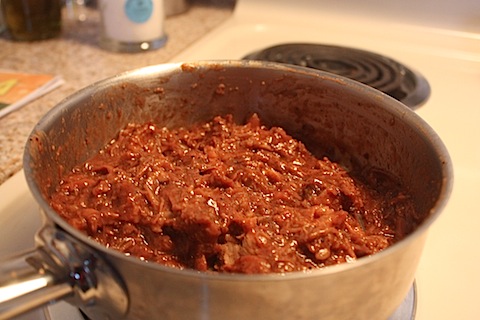 I, on the other hand, really didn’t feel like pulled pork tonight. But I did feel like one of my very favorite dinners of baked beans and cornbread. So, I loaded up my cart and got to cookin’. I made my classic baked beans and used a recipe for skillet cornbread out of the bible. 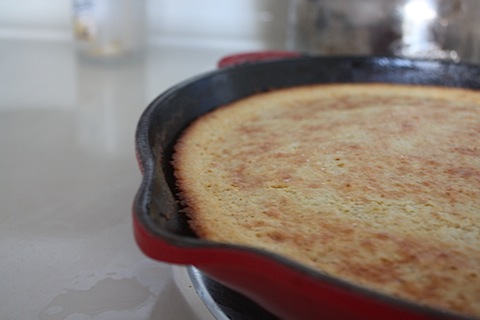 It turned out a bit more grainy and dense than I would have liked (I grew up on sweet fluffy cornbread and like it that way), but honey can fix anything. I also sauted some red Russian kale and rainbow chard in some olive oil and garlic out of this week’s veggie bag that I picked up fresh this afternoon. 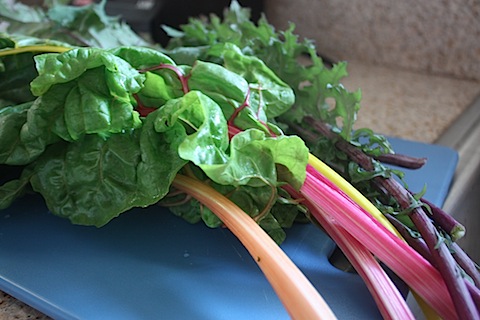 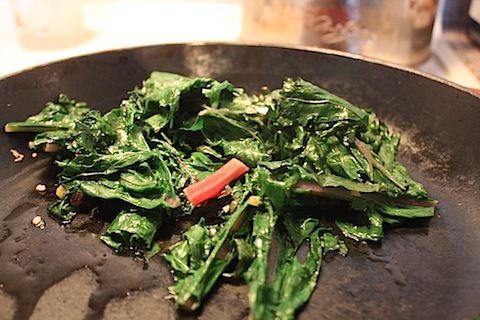 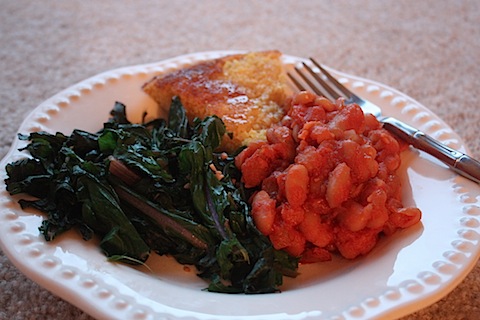 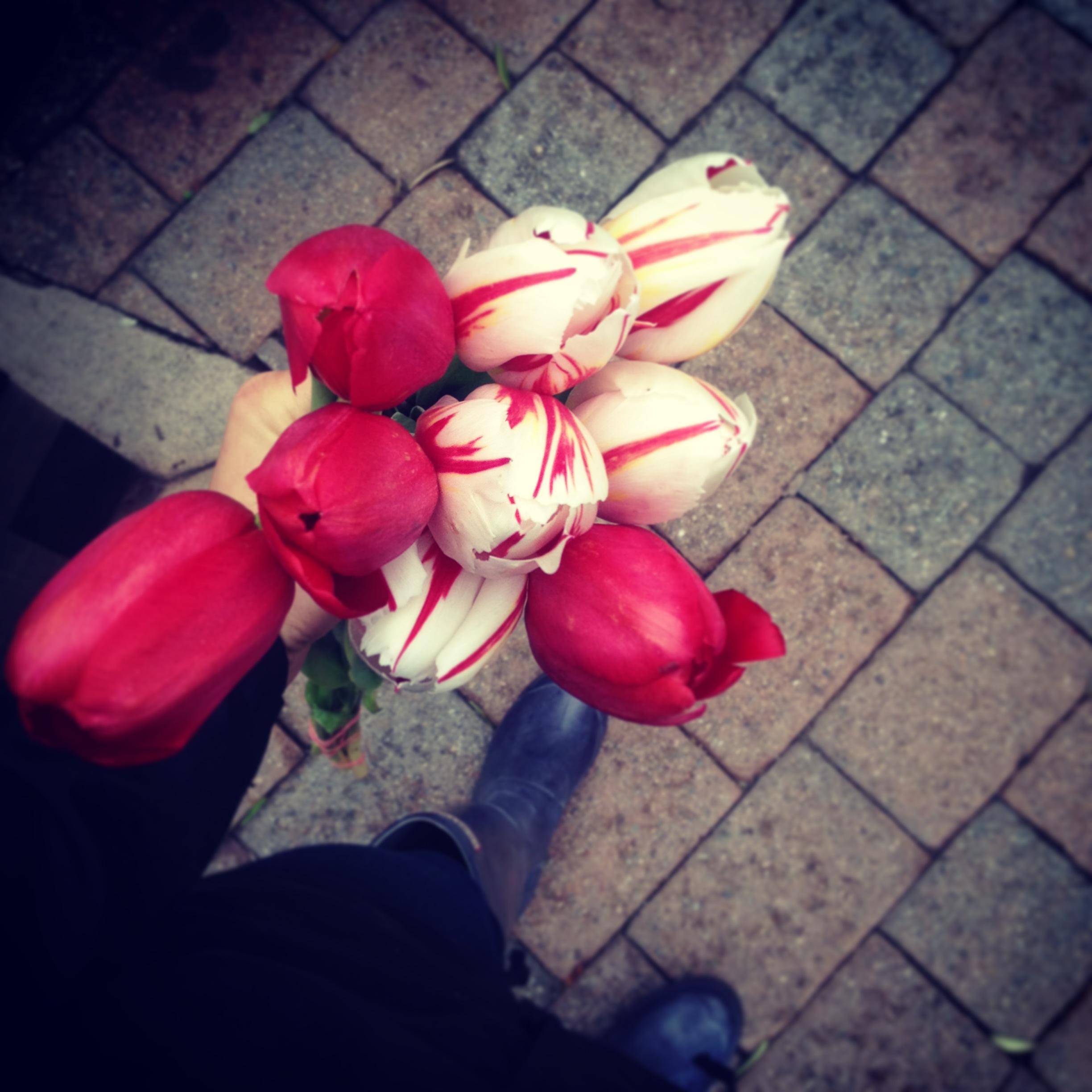 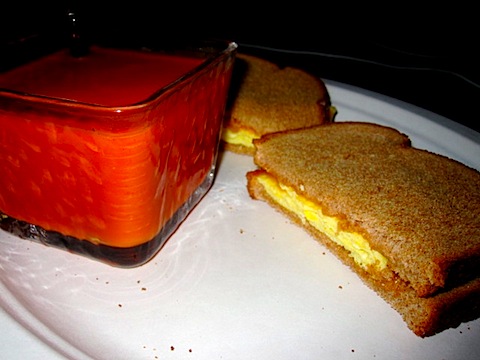