Ah it feels SO good not to be at work right now! I love just lounging about and relaxing…and its that kind of night, for sure, because the weather is really poopy out right now. All windy and rainy. So, I wasn’t going to announce this today because I like to keep the blog positive, but my migraine came back hard-core after lunch. I was not a happy camper. This often times happens when I get migraines. I’ll think they go away and then they come back worse than the first time. Not fun. Anyways though, a miracle happened!!!!! I went to the health food store, and in my pain and grumpiness, talked to the manager of the wellness department. He recommended I try “Feverfew” caplets, an herb known to maintain normal blood vessel tone. In short, when we get migraines our blood vessels are constricted. This herb has known powers to actually open those vessels up and ease the pain. I took a tiny pill with my water and, 45 minutes later, was HEALED! NO medicine EVER has worked that fast or that well so my excitement at finding these is so immense. For all you migraine sufferers, try this!!!!!! If it works for me it might work for you. It truly is absolutely amazing and now I feel great. After I took the pill I snacked on a cherry pie larabar I bought inside for a treat! I wish I could afford to buy these bars in bulk, they really are the best snack I know of…..this one kept me going for about four hours, if you can believe that!

I was craving something goooood tonight. Its been a crappy few days and I just wanted something comforting and tasty! VeggieGirl was kind enough to email me an interesting interview with a vegan cookbook writer. Her name is Isa Chandra Moskowitz and she wrote the bestselling cookbook, Veganomicon. The interview is here if anyone is interested (the recipe is included)! Anyways, I was intrigued by her “chickpea cutlets” that were made up of chickpeas, garlic, spices and wheat gluten. I bought the gluten at the store today and had all the other ingredients so I gave it a go—and I’m SUPER glad I did because these were phenomenal!!!!!!! They looked gross when I was “kneading” them, but after the first bite, it was heaven. They are like little mini meatloafs—quite firm and you def. needed a knife to cut through them. They are full-bodied and very tasty!! I made an Agave-Dijon sauce to go on top (agave nectar + dijon mustard) and the tastes went together perfectly. It was an awesome dinner and I’m already looking forward to leftovers tomorrow! These little patties really pack a punch. They are SO filling!!! Seriously! I had to put my second cutlet back and save it for tomorrow because the first really filled me up! I wanted to eat it because it was so good, but I knew I would appreciate it more if I didn’t stuff myself and had some for tomorrow. With my cutlets, I made some simple steamed carrots and brussel sprouts tossed with promise light and agave nectar (my new favorite ingredient if you can’t already tell. I actually prefer the taste to honey!), as well as some couscous. It was a super dinner and made me feel so good!

After dinner I baked more cookies!!! I used the same recipe as the other day, but doubled it so I would have some take home to give to Ryan. I had to try one as soon as it came out of the oven to see if it “was okay” of course!!! Yum! YUM!!!!!!! I could only eat one of these cutlets so I saved the other! Cooking vegetarian meals is totally opening up a whole new interesting world for me! I just LOVE it! There’s SO MUCH MORE than meat and potatoes, guys, and its just waiting for you!!! These cutlets were fabulous and something I never would have batted an eye at before. We take for granted good, simple foods that can be put together to make outstanding meals that are great for our bodies and souls! Makes me a happy girl, for sure!

Due to my amazing readers (that would be you all!), I have got some recipes back on the recipes page. Its just a selection but I’ll be adding to it and making it a bit easier to navigate through as well. THANK YOU all SO very much for sending me the ones you had saved. It helped out immensely (Erica and Alison, y’all are lifesavers!)

Elastic Waist To The Rescue! 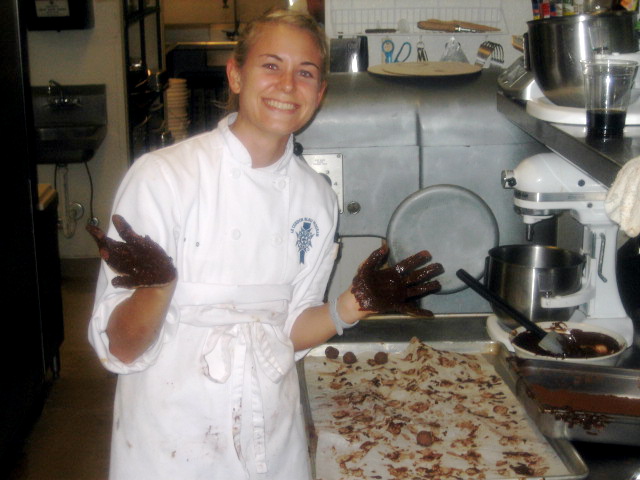