I made it to Vero safely and am getting ready to shower and get ready for dinner. I had a nonfat chai latte when I got here at my favorite little bakery I always used to go to when I was in high school. It was really good! I’m also eying a bag of dried apples right now from across the room, so I might have a few of those in a second to tide me over til dinner. My mom and I are going out for a glass of wine in a little while then have dinner reservations at 8:00. Don’t worry–I’ll bring my camera!

I am getting a lot of questions as to why I decided to start eating meat again after being a vegetarian for so long….I thought a “humorous” way to address this would be to share with you a funny essay I actually wrote for my final portfolio project during my time at the writer’s workshop last summer in Paris. So if you are bored on this Friday afternoon and are looking for a short read, here you go!

The Merits of Eating Pork

I cursed silently as I opened up the café menu. Only meat.  What was with the French and their lack of vegetables anyway? I knew I had my work cut out for me coming to France a strict vegetarian. All of my friends back home had taunted me, placing their bets on how long I could go without touching the loathed animal meat. I brushed them all off, however, and stepped up to the challenge. Now, only a few mere hours into my journey I could see that this might be more of an issue than I thought.
At home, for the past four or five years,  my daily diet had consisted of equal proportions of fat, carbs and vegetable protein, tofu being a primary player on that list. I was one of those poor saps that got sucked into the PETA video and had been an animal rights sympathizer ever since. It wasn’t as hard as I thought though, in the beginning. I actually craved tofu and ordered it out at restaurants whenever I saw it on the menu, much to the chagrin of my friends. In my first days of a being a vegetarian I had emailed them all the link to the video so they, too, could witness the poor little pig family being torn apart and know where my boycott was coming from. Most rolled their eyes, but I did manage to convert two of them, for a couple weeks at least.
However, it had been increasingly difficult after I graduated—my boyfriend and family were all ravenous carnivores, which limited my options for dinners cooked at home. A couple times I had sneaked soy in their burritos and gleefully told them after the fact when their plates were clear and their bellies full. I had even produced a delectable chocolate pudding in the past with soft tofu as a key ingredient. No one knew the better.
Now, as I sat across from my mother in the greasy Paris café booth I secretly wondered if perhaps I had been missing out. All of the people around us looked so happy digging into their country ham sandwiches or juicy beef bourguignon.  I pondered this briefly while taking a sip of Perrier and nibbling on some bread. All I had to eat that morning and the night before was stale airline food—a greasy croissant baked in Newark, New Jersey and some in flight peanuts.
“Ooh look, they have Croque Monsieurs here. I haven’t had one of those since I was last here twenty years ago!” My mom said excitedly. “What are you going to have?”
“I don’t know. I don’t see anything really. Maybe just some bread and a latte with skim milk?” I laid the menu down and rubbed my temples—my head was aching from hunger now. My body screamed for protein and I hoped the little bit in the milk would pacify it. I felt already frustrated with this country and their cuisine. The waitress came over to our table and stared at us expectantly. I tried to communicate in my high school French that I would just like a cup of coffee and some bread. She just looked at me and frowned, clearly confused.
Too tired to fight and feeling quite faint, I said, “Umm…I guess I’ll just have one of those,” and pointed to the same sandwich my mom had ordered. Maybe I could pick out the meat and it would still be fine.
The coffee came and it was strong and wonderful with a creamy layer of foam on the top. Next came the sandwiches, burning hot and filled with melted cheese and paper-thin slices of ham. A little jar of spicy mustard was brought to the table and I slathered it on the warm bread. I carefully took a small bite off the end, chewed slowly, and swallowed. That bite was followed by another, and then another and soon the entire sandwich had vanished before my eyes. My mom sat across the table, dumbfounded, as I proceeded to relish every part of the pig that I had so vehemently preached against. And it was good! Better than any sandwich I had ever had, I decided. I began to rationalize with myself, telling myself that of course the piglets were treated more humanly before slaughter in the great country of France rather than the meat-houses of Midwest America. Visions of happy pigs sipping French wine and frolicking in the countryside before death comforted me in some obscure way.
In the days that followed I continued to expand my horizons, ordering delicious crepes filled with ham, eggs and cheese for lunch and thin slices of ham on salads for dinner. When I talked to my friends back home I seemed to forget to mention this small change in my diet, and instead filled them in on the beauty of the Luxembourg Gardens, the history of the Louvre. I felt a bit guilty at first but kept telling myself I wasn’t really lying, just withholding the truth. I knew for sure that eating the delectable country ham in Paris did not in any way prepare me for Sonney’s Barbeque Joint or Burger King. So I kept the little secret to myself.
The final culmination and sealing of my fate as a carnivore happened one cold rainy day after I had been in Paris for a few weeks. I was on my way to the store and passed a butcher shop featuring an entire dead pig dangling in the window by one hoofed foot, eyes glazed and tongue sticking out.  I stood for a moment, said a silent “I’m sorry” then proceeded to munch on my sandwich and walk on.  What can I say except for what happens in Paris stays in Paris! 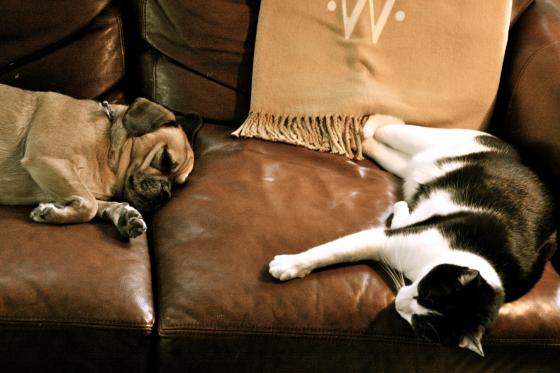 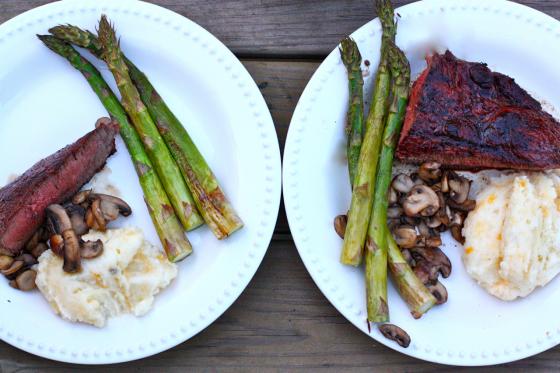 his and hers: dinner last night