Wow guys, I’m thrilled at the amazing response so far to the bike raffle!!! Already we’ve raised over a thousand dollars for cancer research this morning…..and we’re still goin’ strong! My hope is that by Thursday when I end the auction, we will have hit the $5,000 mark. How awesome would that be?

Remember to donate here. I get an email anytime someone donates and I’m keeping track of you. You can enter as many times as you like….it only increases your chances of winning!

I’m not going to lie, I’m getting incredibly nervous for Sunday…. Especially now that I heard that the metric is actually 67 miles..not 60. I don’t know why those seven miles are seriously freaking me out right now. The mind is a powerful thing, no?

I’m trying to eat as cleanly as possible and take extra good care of myself this week. LOTS of water, sleep and nutritionally dense food, such as this oatmeal pancake I had for breakfast! 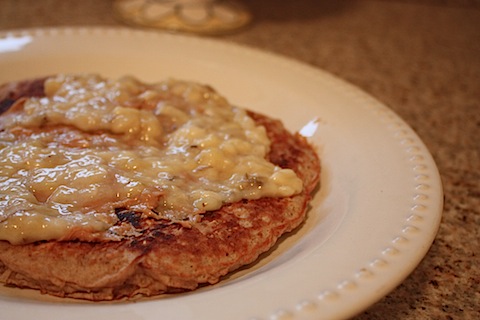 I haven’t made an oatmeal pancake in 500 years. I don’t know why. Clearly they rock and I will be eating a lot more of them. All I did was combine 1/2 cup oats with 1/2 cup liquid egg whites, a pinch of salt, 1 tsp baking powder and a splash of vanilla in the fridge overnight. This morning, I added half a mashed banana to the batter and then cooked until golden on both sides. Topped her with some peanut butter and the other half of my mashed naner. Boom! 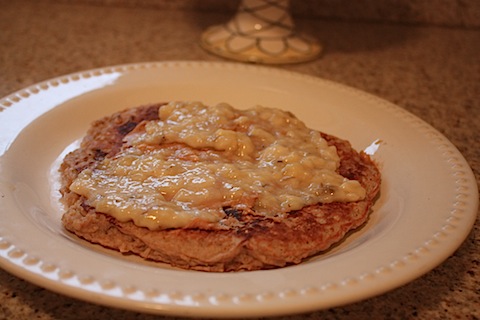 I got my butt to power yoga and sweat everything out. I don’t know why but class this morning was probably the most intense yoga class I’ve taken in years. I thought it was just me (as I huffed, puffed and sweated in the back of the room), but after class Anna was like I don’t know what was goin’ on in there this morning, but y’all had some serious STUFF that needed to be dropped.
At one point of the class I felt like I wanted to cry. Not because it was terribly hard but it was just really emotional. You know, yoga can be like that. I swear I’m not just crazy. Anna said she felt like crying too. It was just that kind of class. Lots of chatarungas and core work. I burn.
Lunch was fishy. 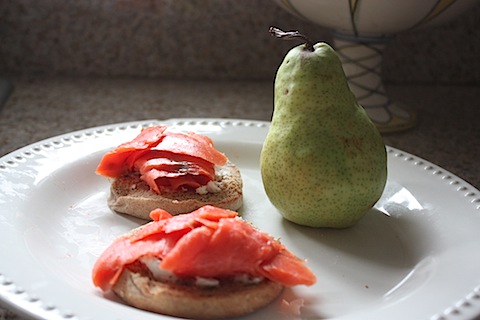 I’ve never bought smoked salmon before but decided to give it a try for a little somethin’ somethin’ different. I had it on top of a toasted whole wheat english muffin with goat cheese and it blew my mind!
So good.
So expensive.
I loved it but won’t be buying it again for awhile. I’m on more of a canned salmon type of budget right now, unfortunately. This was a great treat though and super clean and healthy.
I’m off to drink my body weight in water now. Goodbye.
May 17, 2010 By jenna
70
So, You Want a Bike? A Slimy Tale